We arrived at the camping area Thursday around 5. We were directed to park and remove everything in 5 minutes. There was quite a bit of yelling about it, which was a little frustrating as our car was loaded with most of our camping gear and it took some time to unload it. There was a shuttle to the parking area which seemed to move pretty quickly. I never had to take it so I’m not sure but I heard no complaints.
After we set up camp we hit the village to get our swag and check out the merchandise tent. You had to walk up two huge hills to get there unless you paid extra to Glamp. (This is an observation not a complaint!) it was very mountainous and they did a great job with what they had. After watching a super dorky safety video, we moved on to the swag tent. The tees were kind of ugly lol but they were tech which made many happy although I missed the cotton. There were cozier. There was also a bag of other swag, I think it was blister bandaids, emergen-c and some granola bars? Our captain put them aside and in the rush to load at the end she forgot to hand them out, so I’m not sure.
The merch tent had a lot of tech as well. I did get a comfy basic tee with the Ragnar symbol on it but not much said Vermont, not even the finisher shirt.
They had lots of fun events going on all weekend but since you had to climb all those hills every time I didn’t do any! I did partake in the food trucks, although some more with meat would have been nice. Mostly vegan options. Also they had a great recovery tent with $40 unlimited leg compression sleeves. I used that a lot!
They had free dinner on Friday night and free ice cream although the dairy free sold out fast and I can’t have dairy. They had lots of choices though and it was Ben and Jerry’s!
The race!
They were on the ball with the race portion for sure. It went so smoothly and the signage on the course was spot on. It was insanely difficult and beautiful and I loved all of the trails. It never felt dangerous or unsafe in any way. They had a water stop on each loop although I wished that the red loop one was sooner! I totally get why it was where it was. it was at the bottom of a hill, which was handy. They allowed us to double up in the end to avoid incoming storms and we finished just in time.
A few complaints: the volunteer in the parking lot yelled at us repeatedly about walking too close to the road where the big scary cars were. At no point were there actual cars, and we are all adults who know how to cross a street, but there it was. Nobody enforced the quiet times however. It was near impossible to sleep at all! But we were safe from those cars lol
The bling was a super cool camping tool, and this year it came in a leather sleeve. You cannot fly with it in your carry on, it has a saw blade on it. Be sure to check it!
You have the same five minute rule for leaving the camp so be sure and pack up fast, it is strictly enforced!

Login or sign up to leave a comment.
Kim Prytherch recommends this race
(2019)
"Pretty Flat, Fast, and Fun Half!" 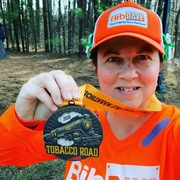 I travelled to this race and stayed at the host hotel, where the expo was held. The expo was small, but well organized. I got my bib and shirt with no problem. There was a small snafu with the parking pass because the woman couldn’t find my name (in her defense, it’s a rough name to spell). After that was ironed out I was good to go. They and anything you might have forgotten at home at the expo plus some local vendors and Jeff Galloway was there.
You had to be at the parking lot by 5:30 which I wasn’t thrilled about and on my first pass at the lot they wouldn’t let me in. I had to turn back and get on line. I didn’t have my pass in the windshield but no one asked me for it, they just yelled and waved me on!
We parked and sat in the car for 40 minutes and still had almost an hour til the start. There was a tent set up that was a little warm and we hung out there until it was time to go.
The race started on time and we were off, the first and last 2.5 miles are on the roads and the rest is trail. The road portion is slightly hilly, which is a subjective term! I didn’t mind them but if you train on flat roads they might seem difficult, especially coming back. The trail portion was hard packed dirt and perfectly lovely. There are parking lots and roads to cross so plenty of places for spectators. The water stops were well manned and some had gels and some had stroop waffles which I loved!
At the finish, someone announced your bib number advice you crossed and the RD shook your hand! The medal was gorgeous.
Post race food was chocolate milk, pizza, beer and Irish soda bread! Yum!
If you BQ they announce it as you finish and you get a special finisher shirt. I love these little extra touches!
Overall a great race!

Link to this review
Login or sign up to leave a comment.
Kim Prytherch recommends this race
(2019)
"A Hilly and Scenic Trek thru Charlotte"

I ran this race as a BibRave Pro.
Parking for the expo was a breeze. It was at the convention center this year, so I parked at Nascar. A little spendy, but worth it since the weather was yucky.
Bib pickup is always fast and easy as their system is ideal. The jacket this year is my favorite ever. It's so cozy and it zips up and has thumb holes! The expo is small but has everything you need, including chocolate!
Race morning we found a parking garage a couple blocks down. They had plenty of porta potties at the start and a race photographer taking plenty of pics. This year the start was right near the finisher area which was nice. The race started on time, and ran through the city and out into neighborhoods. It was very pleasant and very hilly!
Every 2 miles they had water and candy. Definitely a plus in my book! I had gummy bears, chocolate chips, and marshmallows on the course.
The course was well marked and I always felt safe. They had really fun signs as we entered the city for the last mile. The finish was uphill but I powered through and finished strong. We were given a fabulous medal, water, and they had Nuun as well.
A short walk brought you back to the finisher village where you got your giant mug filled with hot chocolate, chocolate for dipping, and treats to dip in it. They even gave us a honey stinger waffle! The line moved fast. They also had a taco truck, heating lamps, and Allstate was giving away knit beanies.
Oh and the FREE pics were ready by lunch for the most part. A few straggled in that night.
I will definitely be back in 2020!

Link to this review
Login or sign up to leave a comment.
Kim Prytherch recommends this race
(2018)
"A Beautiful Hilly Half Marathon"

I ran this race as a BibRave Pro.
The packet pickup was quick and easy. I arrived late in the day, so parking was rough (it was raining), but it was still a quick walk to the building, and I was in and out in a flash. The bib was cute, holiday themed, but the shirt had a lighthouse instead of the cute antlers in the logo.
I arrived at 6 am on race day, and was able to park in a very empty lot just 2 blocks away from the start! There were about 8 porta potties, which was okay for me being so early, but the line grew as time went on. They also had a really cute backdrop for pics before and after the race and a HUGE Santa blowup at the top of the hill. SO FUN!
The race itself was very fun, lots of hills but not the worst I've seen. They had well manned water stops, gels at the halfway point, and after the halfway point, signs marking the miles. It was a closed course, but for a stretch of a few miles, some cars were slipping past the police and barreling down the street. Obviously not the race director's fault, but something to look into for next year!
The finish was really cute, a blow up holiday themed arch, and they announced your name as you finished. The medals were candy cane themed and the center was a spinner. The ribbon was green and red, and very festive!
I was a back of the pack finisher, and there was plenty of cold water and Dunkin Donut Holes for everyone! Way to go, Mount Dora! They had a massage area set up, but I did not partake.
Overall I really enjoyed the race. The scenery was beautiful, none of the hills made me cry, and the finish was downhill! The medal is amazing and the shirt is comfy.
I had to travel for this race, so I probably wouldn't do it again, unless I was in the area already.

Link to this review
Login or sign up to leave a comment.
Kim Prytherch recommends this race
(2018)
"Downhill FunFest in Colorado"

I ran this race with a group of friends and turned it into a fun long weekend.
Parking for the expo was a bit of a pain, you could not park close by so there was a bit of a hilly walk. The expo was small but well planned out. My friends very easily upgraded to the Full while there. I am not that loony. Bib pickup was quick and easy, and there was a snow cone truck outside which was the highlight of my day!
We stayed at the host hotel and they provided a party bus to the start. There were tons of porta potties, and they had mylar blankets for us so we wouldn't freeze while we waited. They also had hot chocolate somewhere but I never went to look for it.
The race started on time and uphill which was a little surprising since the race is advertised as all down hill!
The scenery was amazing, the signage was spot on, including signs with funny sayings on them.
The water stops were on point and the volunteers were so cheerful.
The aid stations had plenty of Deep Blue for sore muscles but no vaseline for chafing. I know it's my job to have it on me, but when I asked they kept offering me the Deep Blue as an alternative which was a little frightening.
The finish line had amazing food... pizza and french toast and donut holes, but they ran out before most of my friends finished the full! Ugh!
Bling was gorgeous but the photo spots they set up were down a long flight of stairs! Yikes!
Overall a great race though and we all signed up for the Vegas race in 2019 already!