The good: The finisher party is truly a celebration.
The bad: the 2nd half of the marathon lacks diverse scenery the aid stations are far and few between.

Accuracy of race information:... I think the communication was as accurate as they though. It was rather difficult to get a read on whether or not I needed to bring my own fuel and hydration. I generally bring gels but I was excited because Huma was supposed to be on course.
Sadly, I didn't see any gels at Aid stations. There were chips and bananas.
..
As it turns our mile 19.5 had gu energy chews on the table if I wanted to stop and ask for them.

The course:
I think the half marathon is a fantastic experience. It's scenic and gives you an opportunity to explore Wilmington. I felt that I was running Gettysburg, PA and Roanoke, VA all at the same time.
There were hills and woods and a cemetery and a park... If I only did the half, I would have probably rated the race 5 stars.

The back half of the marathon was just a long stretch of nothing. The last 2 miles along the water was nice. It made me enjoy the race. But 13 to 25 was just painful from a scenery and (lack of) elevation change perspective.
The start line was super congested. They had 3 races go off at the same time (full, half and 10k) and that was too much on the path. If they would have had the individual events go off rolling that could have thinned out the crowd a bit.
Logistically it made sense, but as a runner it was rough.

Parking was fantastic. They worked with a local parking authority and we were able to park in the city lots at a discount.

The volunteers were swell.

The beer tables were great, the snacks at the end were great.

Login or sign up to leave a comment.
William Brent recommends this race
(2022)
"How about them hills...."

The good: there was a ton of course support! 18 aid stations on the marathon course!
The bad: I think the course map could have been more detailed.
The ugly: you wouldn't think there were as many hills in the ocean state... but there were a few painfully placed hills.

Registration was a breeze, as usual.
As a side note; I really liked the ability to have an early start (for walkers or runners who need to take a bit more time)

Communication from race management was adequate. The only complaint I had was the precise start line was not provided.
I found it (obviously) but usually the cross streets, or a landmark is provided. All the instructions read "downtown"

I didn't feel there was a ton of hype leading up to the race though. A few other races send out a training update or a monthly reminder. Those aren't necessary, but are nice to have.

There was no expo, which isn't necessary. Generally I don't have enough time to go to the expo. Packet pick up was at a local running store, but parking at the store was a bear. The running store was surprisingly spacious and everyone was pleasant.

The course:
Race morning was well organized and there were plenty of port-o-johns
Parking for free was non existing, but you could get right up to the start line and then have access to shops and restaurants along the way.

I think the highlight was there were 18 aid stations on course! Unheard of!

Despite the run being largely on a bike path, there was a ton of crowd support.

The hills though... the hills.....
I didn't realize the ocean state was going to be so hilly. To be honest it wasn't as bad as New York...but the placement of the inclines were painful.

I recommend this race to anyone who wants a surprising challenge In a very scenic location.

Link to this review
Login or sign up to leave a comment.
William Brent recommends this race
(2022)
"Sham-Rock, Sham-Ran."

What I liked: Excitement. Post-race production party. Event Weekend.
What could have been improved: For having done this race 50 years, The aid stations could have been paid out better.

J&A put on a fantastic event.
The communication from the event staff and their engagement on social media were outstanding.
There was ample email from event management regarding course information and start times and packet pick up. There was just enough communication that I was reminded there was something going on but not overwhelmed.

The swag was phenomenal. The medal was nice. it was embossed with a stencil of the boardwalk. The shirt they give you is pretty standard too, but the towel and the hat at the end were really nice touches.

The post-event celebration was off the charts.
I think the event would have been worth running the half marathon and attending the party.
I won't even use words, just find them on social.

In short, do the dolphin challenge, stay for the after-party.

Link to this review
Login or sign up to leave a comment.
William Brent recommends this race
(2021)
"Hidden Gem of the Lehigh Valley " 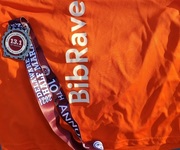 This good: low key, super fast, tons of awards
I should also note that The race has taken fantastic precautions regarding covid

The bad: super fast (see below).. not a lot of communication from the RD leading up to the race.

I think the biggest selling point for this race is the fall foliage along the water. You can get wrapped up in the scenery and forget that you're running a race. The other really nice thing is that it has a walk option also with awards also with walk pacers, So if you're not a runner but you want to get out and participate in a group event in real life this is fantastic.

There wasn't an expo but I don't need one I demonstrated that I can run a race without participating in an expo.
The swag is about average; it's a nice metal and it's an OK shirt

For this being a low key local race I was really surprised with how the community came out and supported all the participants. (I shouldn't be surprised, but there were 6 aid stations and they were well attended!)

You couldn't beat the price even for late registration and it was superscenic past the 1st mile it was all in downhill or flat.
Regarding their covid precautions everybody had a mask and they had extra masks for distribution. They also had bagged lunches post-race, so you didn't have to go and get food touched by anybody else.
The shuttle bus from finished too start was a nice touch.

I think it's pretty neat that they also had a Walker category (which I think I said already) but tons of nice awards in both the running and walking category!

Certainly a race to consider for a fall half marathon.

Link to this review
Login or sign up to leave a comment.
William Brent recommends this race
(2021)
"Fast, flat and chill"

This was such a unique experience.
It was very laid back and chill, but at the same time bigger than your neighborhood 5k.
There were some folks scattered around the course waiting for their runner to pass.
Everyone was pleasant and smiled, waved, or cheered.

There was music at the start and finish, which I guess is expected, but it was tasteful and provides the right amount of energy.

They had a really nice post race set up of people pre packaged snacks and a draw string bag!

It certainly exceeded my expectations and was worth the price.
I signed up last minute (because I couldn't do the i35 challenge) the expo folks were very helpful when I tried to get my packet.

The course was fast. Real fast.
Super fast.
I didn't want to run that fast but it was almost unavoidable.