Absolutely LOVED running this virtual 10k and being a part of this movement!! You can choose which city you want to represent on your run and part of your registration fees go to a local LGBTQIA+ organization in that city! The swag was all so fun and it was great seeing everyone else running it on social media! Highly recommend!!

Link to this review
Login or sign up to leave a comment.
Nicole Kimball recommends this race
(2020)
"Run Irvine!"

Such a great experience running the Irvine Half Marathon! Highly recommend! They offer bib mailing, which makes a big difference to me when choosing races, especially since I do not live locally. Race morning was a breeze. There is a large parking lot at the park where the race start/finish is. Plus the race doesn't start until 8am which makes it so much easier to get ready in the morning! Slightly chilly at the start but warms up fast. Great announcer at the start, a little short on port-potties though, but we all made it work. The course is on a nice path that winds through Irvine, very easy race with pretty much no elevation. The aid stations were well stocked and packed with volunteers! The finish line area had lots of booths and stuff to try, plus the medal was beautiful! Overall a really well done race!

Link to this review
Login or sign up to leave a comment.
Nicole Kimball recommends this race
(2019)
"Beautiful course, great race!" 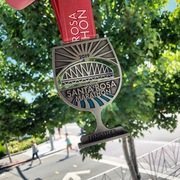 Absolutely loved the Santa Rosa Marathon! Run views of vineyards and part of the run is on a tree lined path, plus you get to run through the Deloach barrel room, which was a perfect pick me up! Not only is the course beautiful (and mostly flat), but the swag was wonderful. All of the half & full runners get a high quality long sleeved zip and a bottle of Runners Red from Deloach Vineyards. The medal was super cute too! Parking for both the expo and the race were super easy. There is a parking garage right next to the race start and it was pretty cheap to park. The race isn't crowded like some others I've done, which meant it was really easy to get anything I needed at the aid stations and I was never trying to run around people. Overall a great race and I would highly recommend!

Link to this review
Login or sign up to leave a comment.
Nicole Kimball recommends this race
(2019)
"Napa Valley Marathon"

Loved this race! So well organized, with great swag, and a beautiful course. The net downhill is wonderful, and you are constantly surrounded by great views. Not too many people race so you aren't crowded the whole time. The bag the race gives out is great quality, one I will definitely continue to use. Plus the medal was super cute. They even have food at the end! Highly recommend!!

Link to this review
Login or sign up to leave a comment.
Nicole Kimball recommends this race
(2019)
"Oakland Running Festival Half"

Such a great experience with running the Oakland Half Marathon! The communication from them leading up to the race was always really clear and helpful, with tons of updates about what to expect on race weekend, which I love because I am a planner.

The expo was really easy to get to and had parking. A lot of other local races were there, so it was fun to walk around and plan out my race calendar a bit! The t-shirt was a good material, not a running fabric, but that works for me. No line to pick up my bib, which is so great compared to some other races I have seen.

Race morning was a bit different for me. The half didn't start until 9:30am, which I am not at all used to, but kinda ended up loving! Got to sleep in a bit, have coffee, and breakfast, before driving into Oakland. There was no traffic and tons of neighborhood parking less than half a mile from the start. They had tons of ports-potties and no line for those either. Just a super chill and easy race morning, can't ask for anything better than that.

The race started on time and they had pacers for the half, which I ran almost the entire race with. They seemed pretty good about staying true to time. The course was okay, you are running through the city of Oakland, so if you are looking for a scenic race this isn't the one. But I love city races so seeing all of the wall murals in Oakland was great. Plus the city comes out hard with support!! There was barely an empty section in the whole 13.1 miles!

Finish line was great, they had the marathon and half marathon finishing at the same time in the same chute so it was a bit packed. But right after the finish they had tons of water and food choices! More food choices than I have ever seen. Oranges, bananas, apples, popcorn, granola bars, fruit cups, more crunchy snacks, it was amazing! Past all of the treats were the medals, and they were just handing them out instead of putting them around your neck - which was fine with me - but if it were my first marathon I probably would have been a little bummed. The medals were great though! High quality with the bay bridge on them. Also, they have FREE race photos! By the morning after the race I had tons of great photos that were super easy to download - such an amazing perk!!

Overall - a really great race that I would definitely recommend! I'm so bummed I had to drop to the half, was really looking forward to running over the Bay Bridge. But I am keeping my fingers crossed that the course is the same next year and I can try it again!