Registration/Communication-
Available online until the race sold out the week before the race date.. Once I registered, I received 1-2 emails a week detailing race information. One included a very in depth runner’s handbook just for race weekend.
Expo/ Races
The expo was on the smaller side this year and based at Snow Park. Parking was a little tricky but I lucked out and got one just around the corner. The race offers a full marathon, half marathon, and 5k and now a 10K . There is also a We Run This Town challenge with an extra medal for running the half and 5k on the same day.
Race morning-
The 10K starts at 7AM with the marathoners. The 5k and the half both started later. There were plenty of port a potties for the early runners but bring a flashlight because it was still very dark. The race started right on time but I didn’t hear any announcements or starting messages, I just headed to corals a little before 7AM.
Course
The course loops around Lake Merritt for the first 2 miles before heading into the city for 2 miles. The last 2 miles were in downtown and back to Lake Merritt. With an uphill finish. There were aid stations with water and Gatorade every 2 miles-ish. They seemed well staffed and organized. As for elevation, I consider this to be a flat course. The best thing about the course is checking out the local street art along the way.
Once across the finish line, runners were given medals and had the chance to choose from a variety of the usual post race snacks. Swag-
Swag- Every runner received a race specific shirt, and a truly awesome medal showing off some of the great local street art.

I still love this race and would run it again.

Link to this review
Login or sign up to leave a comment.
Fallon C recommends this race
(2021)
"Rolling Hills with Ocean Views"

Marin Endurance Festival was held on Halloween weekend and I did see some runners in costume.

Registration was easy to sign up and later manage your profile. I added packet shipping as I was driving from hours south and knew the packet pickup window ended at 2 on 10/30 and that would have been hard to meet. The bib arrived the week before the race with safety pins too. I was a little confused as there was no shirt included and I hadn’t heard anything else in regards to event shirts.

The race was great with email communications in regard to parking but between the rains the week before and the location of the beach, parking was extremely limited. I parked 2 miles away from the start/finish at McNear’s Beach. This could partly be my fault as I am not local but a bigger race map would have been nice.

I was registered for the half but needed to drop to the 10k due to training and life not being what I had planned leading the race. I messaged the race but never heard anything back. On race morning with the help of other runners, I managed to find the solutions table. From there dropping to the 10K was easy.

The race is a late start, the half starts at 9 and the 10K at 9:45. Part of me liked the ability to sleep later but at the same time would have preferred an earlier start. But that also could be because I made the rookie mistake of overdressing and ended up roasting, ha ha.

The course is awesome though. Even if I think we were misdirected. The course description stated that it is all road except for .4 miles at the finish line. We sent up the trail on the way back around mile 4. Now I love trails so I didn’t mind but I did feel like we were not where we were supposed to be. Also there were no mile marker signs for the 10k after that. 2 lone runners had passed me on the road going the opposite way before the trail so I don't know if they were misdirected or the rest of us were.

The course was very scenic with some awesome views though. I also preferred the trail return on the last out and back, I was just confused. Also, prepare for hills.

The medals were great, both sides were detailed and colorful. Post race, I randomly found a table handing out race shirts but I don’t recall it being communicated that would get them post race.

The aid stations were spaced well throughout the course with water. Electrolytes were not available until the station around mile 4 right before the trail portion.

The start/finish area was at McNear’s Beach and there were various booths set up with local businesses or running stores. Live music was being played and all runners got 1 free beer. The beach is very pretty so it made for a nice start/finish.

Even with all the confusion, I would do this race again and do recommend it to everyone too.

Link to this review
Login or sign up to leave a comment.
Fallon C recommends this race
(2021)
"Racing in Santa Rosa" 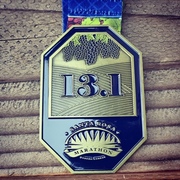 The course involved a couple miles of city streets before heading off the road onto a river path that was part paved and part dirt. I do wish there was more dirt but that’s just my preference.

Aid stations were interspersed every few miles with Nuun, water and wet towels. The wet towels turned out to be a good thing as the morning did warm up. They also had plenty of porta-potties at each station.

The swag was great- nice medal, great full zip jacket, wine tumbler and a bottle of wine from DeLoach Vineyard. Race pictures were also up a few hours after the race. Speedy! Parking was also surprisingly easy.

This is definitely a race I would run again.

Link to this review
Login or sign up to leave a comment.
Fallon C recommends this race
(2021)
"Running in CDA"

Coeur D’Alene is gorgeous. The lake and the park with the trails is like runner heaven- could that just be plopped down where I am, please?

The race utilized a rolling start from 5:30AM to 11:00AM. You had to register for your start time before race day. McEuen Park was the race start and finish and had plenty of parking available.

The first 3 miles headed out into city streets along the lakeside before looping back to the park. Man, there are some nice houses out there. The next 10 miles were on a paved path called the North Idaho Centennial Trail. This thing is 23 miles long! Again, can I have it please?

The course was awesome, lake views for most of it, dream houses for the other part. Plus, I decided I really like rolling starts. I never felt like I was back of the pack even though I definitely was. I was very warm though so I was questioning the sanity of everyone who started later in the day. I’ve never taken in so much water during a race before in my life. I drank 4 bottles on course. Which brings me to the aid stations. The stations were well equipped with plenty of water, Gatorade and snacks.

Swag was awesome- a great medal and a lightweight hoodie- much better than the usual tech shirt.

Link to this review
Login or sign up to leave a comment.
Fallon C recommends this race
(2021)
"A Perfectly Blended Challenge"

While I missed running in the scenic roads that make up the Napa Valley Marathon, this was a fun challenge. The Perfect Pairing Challenge offered up a 1 mile, 5K, 10K, half marathon and marathon races. All except the marathon had to be run in one run over the course of 40 days or so. The marathon was a Barrell Blend challenge and let your run it in as many runs as needed to hit that 26.2 distance.
Each race you completed earned you another piece of swag. If you completed all the races, you would end up with the cutest charcuterie set. I completed everything but the half marathon as I am not at run 13.1 miles consecutively point in my fitness. Oops.
The race also offered fun, interactive Facebook events about wine and charcuterie . Gave you something to look forward to as the weeks advanced towards the race. It was a fun challenge.