Parking was easy to access and close to the start/finish. Plenty of porta-potties. I picked up my bib on race morning, which was easy and painless. As part of registration, runners received a jar of Bove's marinara sauce. T-shirts were available for purchase but not included in registration.

I knew ahead of time that the first three-ish miles had a bear of a hill, but the reality of that hill meant that I walked most of the first three miles. It was steep and seemingly never-ending. There's also a short, steep surprise hill at mile 11, which was a bit demoralizing.

Otherwise, the course is beautiful, with plentiful aid stations and course support. The $35 registration fee is pretty great for a half marathon, but keep in mind that there's no medal. I didn't realize this before registering, but honestly, it didn't bother me. I'd rather have a good race at a cheap price than yet another medal.

In spite of the challenging hills, I managed a PR, which was a nice touch. Even better, the announcer called my name over the PA system as I crossed the timing mat. Post-race food was pretty standard--Cabot cheddar, bagels, bananas, water. I would definitely run this race again.

Link to this review
Login or sign up to leave a comment.
Rachel Drew recommends this race
(2017)
"Great New Course"

This is an annual favorite for me. This was the first year in the new Colchester location, and race management has maintained the excellent pre/post race quality that I've come to expect with this race. The new course is also much more interesting than the old course. Registration is $20, and while you are encouraged to raise money for the Respite House, you don't have to.
Pros:
- Real bathrooms pre/post race
- Indoor waiting area in case of inclement weather
- Great food and drink options post-race
- Excellent volunteers and multiple water stops
- Awards for 1st and 2nd place in all age groups
Cons:
- Cotton t-shirt

Link to this review
Login or sign up to leave a comment.
Rachel Drew recommends this race
(2016)
"Great Run, But "Ride" Option Needs Work" 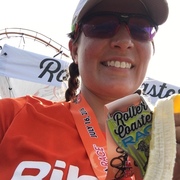 This review is of both the 10k running race and the "Ride" option, which allows participants to ride a 5k worth of distance on roller coasters for an additional medal.

Run:
Registration costs (starting at $55 for early bird and going up to $70) were well worth the price, considering that registration for the event gets you free parking (usually $20 per day) and an admission ticket to the park (usually $50 and up per day). Parking was very easy, and only a short distance from the start line. I took advantage of race-day packet pick up because I drove down from Vermont to avoid paying for a hotel stay. Things were well-organized at the start, although there were only 6 porta-potties for 300ish runners, which meant that a lot of runners were still in line to go when the starting horn went off.

The course was surprisingly well-shaded, which was great considering that the sun was out and humidity was at 90% at the start. It's a decent split between running on hard-packed dirt access roads on the perimeter of the park, and running on asphalt through the park. I ran the 10k option, which was 2 loops. There were a couple of small hills, and one larger one, but on the whole, elevation wasn't really a challenge. Two water stops on the course, so 10k runners had four hydration opportunities. VERY supportive volunteers, and the course was well marked with chalk arrows and volunteer flaggers.

I was disappointed with the food options at the finish. It was a hot, humid day, and all of the beverages were warm-to-hot in temperature. There were the usual apples and bananas, some cookies, and bagels, but I didn't see any cream cheese or peanut butter to put on them. The lack of food turned out to be a big problem for me. Since the bagels didn't look appealing, I decided I'd just buy food inside the park. But aside from cotton candy and funnel cakes, food vendors in the park didn't open until 11, which was almost 2 hours after I finished, and I was RAVENOUS by the time I managed to get my hands on an $8 slice of pizza.

Ride:
As part of the roller coaster race, participants were to "Enjoy early access to The Great Escape and select rides, before the park opens to the public." Perhaps it was wrong of me to assume, but I figured that this would be an opportunity for those of us "racing" to get a head start on coaster riding before the park opened and lines got long. What this actually meant is that all 300ish of us were corralled into a very small fraction of the park (cordoned off with ropes and security guards) with only 1 restroom per gender, no food options, and 3 operational rides, only one of which was a roller coaster. Again, I shouldn't have assumed anything, but I felt sort of misled.

Add to that the fact that within an hour of opening, wait times for roller coasters extended beyond 30 minutes, food vendors didn't open until 11 am, and my favorite coaster (and the longest one in the park, and therefore the most advantageous for those doing the coaster race) was not open, and no one knew whether or not it actually would be open that day, and I was underwhelmed by the whole thing. Still, I stuck it out, and by 1, my favorite coaster was operational, and I'd racked up enough distance to earn my coaster medal.

The final blow for me was that in order to check in with the race officials to receive my coaster medal, I had to leave the park. This didn't seem like a problem since I was planning to head home right after anyway, but as I exited the park and attempted to walk over to the race table, I was stopped by a security guard telling me I couldn't go that way, and would have to go through security again. I'm sorry, but asking people to wait in line and go through a metal detector a second time is just dumb. I was so dumbfounded, and quite frankly, angry, that I left without getting my coaster medal. In the future, the race table should be somewhere more accessible.

To summarize:
- Could use more potties at the start/finish line
- There needs to be more food at the finish, or food vendors need to be open earlier so that hungry runners can refuel
- Cold beverages after a hot race would be nice
- Early access to the park didn't really mean much for those doing the coaster race
- The race table should either be inside the park proper or outside the security checkpoint so that it's easier to access

I would definitely do this race again, especially the run portion, simply because now I know what to expect, and won't be disappointed by unmet expectations.

Link to this review
Login or sign up to leave a comment.
Rachel Drew recommends this race
(2016)
"An Annual Favorite"

This is now the third year I've run this race, and I will keep coming back. Excellent course support, mostly flat course, enthusiastic and appreciative volunteers, great post-race snacks, access to real bathrooms and space to wait inside in case of inclement weather. Registration is only $20, but you are encouraged to do some fundraising, as this is intended to benefit Vermont Respite House. They give age group awards for 1st and 2nd place in each 10 year age group male/female, as well as overall winners male/female. I do wish they'd give tech shirts as opposed to cotton, but for a charity race, that's perhaps unrealistic. If you want a fun, feel-good 5k race, this is a good one for you.

Link to this review
Login or sign up to leave a comment.
Rachel Drew recommends this race
(2016)
"Crowded But Fun" 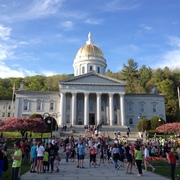 This is now my third year running this race because I get free registration through work, and my feelings are the same as in years past. It's a great community event, but it has some logistical issues.

Cons:
- Traffic coming into Montpelier is a nightmare. I got off the highway at 4:40, sat in traffic for 20 minutes, and ended up parking almost a mile away from the start at the Park and Ride. There are no shuttles, so I had to run over.
- Parking options aren't always super clear. They send out an email before the race telling you where you can and can't park, but some signage coming off the highway would be very helpful.
- There is a mass start with close to 4000 participants, but almost zero race etiquette. In the pre-race emails, it's suggested to seed yourself appropriately based on your pace (and walker vs. runner), but even so, the first half mile or so of the race is extremely congested, and many people end up stopping to walk right away. People walk in large clumps, all over the road, so a lot of bobbing and weaving is necessary.
- Cotton t-shirt

If you're looking to "race" this one, make sure you seed yourself way up at the front; otherwise, resign yourself to the crowds and jostling.