I'd been eye-balling this race for a while and was pleased with the fact that I registered for the race three days in advance (with a code) for just $80 for the half marathon). Perks included tech jacket (half-zip) and medal. Not really any sort of expo, but a few tents for local partners or organizations that came out in stride.

The course runs along the Phoenix Canal, which was an awesome little bit of scenery. After a while, it got a little mundane, but it was nice running along water (how Californian of me). There were few folks out cheering, however, with most of those being Startline employees (volunteers?) manning the water stations - but that was literally 1-2 people per table every mile and a half or so. They were super sweet and at least knew the course and when the next water stop would be, but it made for a desolate run. However, I can see why all my Phoenix friends like running along the canal, especially considering how much it makes you feel like you're NOT in central Phoenix.

My only beef with the course was that my Garmin seemed to lose signal in the underpasses. Mind you, these are all of 20 yards long, but enough to toy with pace and mileage that it definitely threw me off my game!

Race Pros:
- Small event (if that's your thing!)
- Jacket is awesome; can't wait to wear it!
- Quality event from start to finish

Race Cons:
- No crowd support - if you run best in a high-energy course, this is not the place to be your best!
- Medal ribbon had the wrong date (just an LOL moment when we realized)
- Underpasses are a popular place for trash and/or homeless folks. They should have been looked at/cleaned up prior to race start, if not for safety alone. Under one, there was a whole smashed DVD player/VCR and one had half a camp set up.

I think this race can really develop into a popular event. Don't mind that it's a "women's" race, as there were two men that completed the half too! I think Startline can reach out to local organizations (especially MRTT) that sponsor and support women and have them participate as volunteers to continue to make this a bigger and better event! 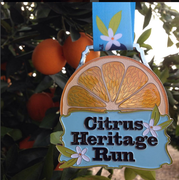 No different to my experience in years prior, I absolutely love this race. If you're looking for a race that epitomizes Southern California into 13.1 miles, this is it. Run through orange groves and lemon orchards, peak at the top of the hill that allows you to see the snow-covered San Bernardino mountains in the process. Stunning, just stunning.

The race went through an image re-design, so all new logos, medals and t-shirts this year that certainly do not disappoint!

Because of the snafus in distance last year, they really went all-out to make sure that frontrunners were guided - extra volunteers at EVERY single corner and turn, chalk-mnarked turns to indicate through the winding parts of the course. Riverside Road Runners did a great job to ensure that the course was as planned!

I'll be back again, for sure.

Login or sign up to leave a comment.
Megan recommends this race
(2015)
"Lexus Lace Up Riverside Half 2015"

Having only done the 5K the year prior, I wasn't sure what this course really entailed for 13.1 miles. Turns out, it's mostly along the Santa Ana River Trail and I can imagine (during a non-drought time) is quite beautiful. Miles 4-6 jut you out through some neighborhoods and then back down to the trail for and out-and-back to mile 8 and then back to start.

I was fortunate enough to get to pace this race as well, so I had a great time being able to cheer folks into their finishes.

T-shirts were great this year, and it can't get much better than your race entry included post-race food trucks! I scooped up a hot dog (delicious) and enjoyed our beer garden celebration (also included!). The Lace Up series is one of my favorite in Southern California. Among the 5K, 10K and half marathoners that day, there were still less than 1,200 people - a great intimate race with some big-race qualities and entertainment! Thanks Lace Up!

Link to this review
Login or sign up to leave a comment.
Megan recommends this race
(2015)
"Holiday Half 2015"

This race is put on by the same folks as the Long Beach Half and Full Marathon and you really see the quality in this event.

The race "headquarters" (start/finish/parking/expo) are all based at the LA County Fairgrounds. You do have to pay for parking, but if you're there for both races (5K and half, Sat and Sun), your parking coupon is good both days, so that's cool. T-shirts this year were ugly sweater printed tech tees and one of my absolute new favorites. I love that they really change their designs up every year and this one did not disappoint!

The course can be considered challenging if you don't run hills regularly. The half course starts in the fairgrounds, skirts out for a bit, comes back onto fairground property, up the drag strip (like the 5K), and then out to head to Bonelli Park and Lake Puddingstone. Much of the course is through the park (one full loop), which is good rolling hills. Stay on pace and they won't kill ya, but enough to challenge you, most certainly. The last three miles of the course come out of Bonelli along the south border of Brackett Airport, so it's fun to see prop planes coming and going before you head back into the fairgrounds, down the drag strip again and into the finish.

The expo is small, but quite a bit of vendors out and about on both days, both races and community organizations alike.

Run the 5K on Saturday and the half marathon on Sunday and earn the Golden Snowflake Challenge medal to get a 3-medal weekend! My only complaint is that there is no day-before pick up so EVERYONE (5Kers, challengers) has to come early(er) Saturday morning to pick up bibs and gear before the 5K starts. Thankfully, 5K starts later than most (8:30) and because of the lines, the 5K was actually delayed until 8:40 this year.

I absolutely love the Lace Up series, and was excited to run Irvine for the first time this year. The half was not offered this year, just the 5/10Ks. Parking is easy at the park, and even when it overflows there is a church and shopping center nearby for easy overflow.

Course is not super thrilling, but runs along the San Diego Creek Trail, so lots of runners and cyclists out on race morning. Easy course, just a few inclines as you make your way under road bridges or back over some parts of the trail, but most worthy of a PR if you want!

Lace Up is a top-notch race company. All race entries include an awesome medal, beer garden ticket AND food truck ticket. Computers are available at the Lexus booth for instant race results, in addition to rce podiums for some fun photo opportunities! There are also chances to earn more swag at vendor booths, instanly print your Instagram posts, and other fun, free chances for involvement. Looking forward to Palos Verdes in a few weeks!