Edward recommends this race
(2016)
"Every Runner Should Participate " 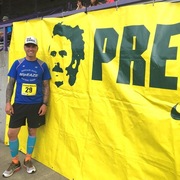 This was the 37th year of this memorial race for legend Steve Prefontaine. The Coos Bay local was on his way to becoming one of the very best runners in the world until his life was tragically taken too soon.

This race was very special in many ways. I was excited to be a part of a historic area and it was nice that this small town seemed very proud of their own!

There was no expo.. absolutely zero. Packet pick-up was quick and easy, but the only thing to pick up was a shirt and bib... no other goodies in the plastic bag.

Race parking was pretty simple. Lots of people out and about and it was awesome to see their support out there. There were approximately 700 participants competing so not too big, but not so small that it is boring.

The race itself was HILLY! and I mean really hilly!. This was my first race that had so many brutal hills, and it was only a 10K. There was one called Agony Hill, that was 3/4 of a mile long.... just a steady beast of a hill.

The view was pretty nice if you took out the distractions of the hills. There were lots of trees and it was cloudy and moist out. It made for a great race. The AID stations were plentiful and the volunteers did a great job either handing water or spraying us down with hoses.

The finish was cool... right into Prefontaine's high school track, with tons of spectators cheering us on. They had the football team and the cheerleaders out in full force. They were handing out tons of water post race, but no snacks.

They had a timing company printing results in real time and handing out small receipts with our info on it. I thought that was a cool memento.

Unfortunately.... no medals.... I was bummed about that, but I was in historic place with some emotions going on, so just being able to race there made it worth it. The bib will be good enough for me.

If you are any kind of runner, and know the historic significance of Steve Prefontaine, you need to do this race.

This is a real fun race. I had to drop from the Half to the 5K due to an injury.... I was a little sad, but it was still fun!

The course is flat and awesome. Starting almost on the beach... steps away, and running along the coast most of the way, it is a beautiful course and the smell of the ocean keeps you going. Since I ran the 5K, I didn't see many aid stations. The finish is awesome (right near the beach again) and the crowds are super supportive. They hated out GREAT finishers medals, one of the biggest I have seen, and post race consists of a FREE beer and item off of one of the three gourmet food trucks. That right there is awesome! They had lots of fun things to do at the EXPO and really cool swag and finishers awards.

I took 2nd place in my age group and got a cool metal cup!!

Lexus is always trying to out-do last years events.... so run one of these races and you won't be disappointed!

Link to this review
Login or sign up to leave a comment.
Edward recommends this race
(2015)
"Fun and Fast"

First of all, I am spoiled. I live in Ventura and the race start is probably 12 blocks from my house. I might be biased :)
The Ventura Marathon (Half) was the first real long distance race I had ever done. Since then I have become a way better runner, so I wanted to race it this year and see how much better I had become.

The course was a little different this year. We did not run through the Ventura Harbor, which was better, since that is just an awkward loop with lots of turns. We did a straight out, straight back race which I am learning I do not like as much. When those races happen, I end up seeing the same things and start counting miles instead of enjoying the scenery! The course is definitely flat and fast.... a good one to qualify for Boston on! The AID stations were plentiful and the volunteers were awesome and enthusiastic. The snacks at the end are always awesome and the medal is pretty different (sunglasses shaped with a bottle opener on them). There were a lot of vendors at the Expo and everyone along the course and finish were awesome. It is a great race when you end at the pier and can enjoy an ocean dip to cool off!

This year was super hot and humid (rare for Ventura) and the course was 0.8 miles longer than it should have been (for the Half only). The staff was gracious enough to adjust the times for the correct distance. Also, they had free, Yes, FREE race photos. BONUS!!

Come out and run Ventura with me next year!!

Link to this review
Login or sign up to leave a comment.
Edward recommends this race
(2015)
"Fun local race"

This is another small, local, fun race where almost everyone knows each other. It starts a few blocks from my house and is pretty inexpensive, so It was a must on my list.

Parking is free everywhere around the start. Also, the start is right next to the beach, so that is nice. I ran the 5K and it was a great view the whole time out and back.

I never saw an aid station (since I was only doing the 5K) but the path was clearly marked where to go and where to turn. The expo at the end was very small, it was more like a few friends hanging out grabbing a banana and a medal.

If you are ever around Ventura during one of these small races, sign up and do it... meet some new friends... relax at the beach afterwards... and then we can all BBQ together!

Link to this review
Login or sign up to leave a comment.
Edward recommends this race
(2015)
"Awesome OC Half!"

I must start off by saying this race was a must for me to get my Beach Cities Challenge medal... but I am, so glad that I ran it.

They are super organized for this race. Although they were charging 10 or 12 bucks to park at the finish line, there was plenty of off site parking that was free. They had tons of busses for us, and they were running non-stop. The bus drop off is right by the starting line and very close to that starting line was tons of port-o-potties and tons of UPS trucks taking our gear. That made everything quick and easy.

The course was pretty awesome. We ran from Newport Beach to Costa Mesa. Sometimes we were running through downtown business districts, through neighborhoods, next to the ocean, and on major roadways.... it all led to a cool run with the best views.

The course didn't have too many hills, but there was one around mile 11 that made me shake my head... I still handled it pretty well. It is definitely a course you can get a PR on. I decided to take it easy and not race it, just because I was worried about an injury. That competitive streak kicked in and I still ended up finishing with 1:44:38.... not my fastest, but not my slowest either.

They expo had a lot of cool bands, plenty of things to check out, probably 50 massage therapists there to help out with the cramps, and free pizza! It was a great even and I was stoked to run it... and get my Beach Cities Challenge medal!!