Tim Murphy recommends this race
(2022)
"A GREAT return to racing! "

This is an exceptional event that's put on by the same people who host the Honolulu Marathon. Parking is a breeze - there is a ton of parking within walking distance to the start and shuttles as well. The course is mostly flat with some hills at the end, but you're running up a frickin volcano cone with awesome ocean views, so who could complain about that!

This is a total gem of a race and definitely one to put on your race calendar!

Link to this review
Login or sign up to leave a comment.
Tim Murphy recommends this race
(2020)
"Super fun trot! "

Beautiful race through the OR countryside, well marked and fun vibe. Post race party and food was outstanding! Great value, top drawer race name, would definitely run again!! I ran the Half. which followed a scenic course and doubled back on some of the other distances so you got to feed off the energy from some of the other races.

Pic isn't from the race but it seems related and is just way too good not to share.

Link to this review
Login or sign up to leave a comment.
Tim Murphy recommends this race
(2020)
"Stoke, CHOCOLATE, and all the hills!"

You guys. This race was so fun!
I'll start by sharing that I got a free entry into this race because we've worked with Hot Chocolate for like 100 years now and they are definitely part of the BibRave fam. That being said, I was not given an entry with any expectation of reviewing the race. But...

This race really is so fun - expo and check in were a breeze (dynamic bib assignment FTW!), and the expo space was perfect. Spacious enough to feel like a serious expo, but not so big that it felt empty. Some great vendors from both the race and brand side. Even got to see the awesome folks at Knockaround sunglasses, who are new sponsors to the race series!

The race is hard, y'all, but I really liked it. Yes, there's like 1,100 feet of gain over 15K, and that's pretty serious. But the hills are pretty long and gradual so it never feels like you just run into a wall. The course is spacious and is an out-and-back, which I like because I love the energy of seeing people in front of me and behind me throughout the race. Makes you feel more connected to both ends of the field!

Post race is just silly - I'm told they recently reformulated their hot chocolate and it is just the most rich, decadent chocolate goodness you can find. Honeystinger waffle dipped in chocolate fondue? Just stop. It's so, so good. And the volunteers on and off the course - including in the finisher area - were like nothing I've ever seen. Stoke level midnight for sure!

The weather was sunny and cool and beautiful - honestly perfect race day weather. If you're considering a fun, laid back race or a tune-up race during a faster training cycle - you should definitely check this race. And - maybe best of all - free finisher pics delivered right away (see attached).

Not even sure where to begin with this race! The 2019 Shamrock Run was basically perfect. I ran the Half, which is definitely challenging to with all the hills, but it's a very fair course meaning for all the up you are treated to lots of long downhill sections. So while you do slow down going up, you get a lot of that back on the downs. Weather was blue skies, sunny and about 50 degrees at the race start. Perfect!

Expo and packet pick up were a breeze - they have dynamic bib assignment so they just scan your QR code and assign you a bib in real time - no lining up according to numbers. I was worried about corral assignments because with this method the race can't really assign corrals, but self seeding was totally painless and I was able to walk up to the front of the race about 5 minutes before the start.

Race merch was SOOO good - I never, every buy race stuff (it never fits or just doesn't look good) but the gear store for Shamrock Run was so fly. Jess and I spent $75 just on the race gear!! Medal and t-shirt were also outstanding (pic below for the medal).

Post race party was off the charts. The headliner is one of my favorite bands - Coming Up Threes - a local Irish band that just jams, and they kept the party going from 8am until 1pm. The beer was flowing, free (and tasty) lentil soup from Bob's Redmill, people were dancing, the sun was shining, venders were offering a ton of giveaways (so many nutrition bars!) - it was just a blast.

Portland Shamrock Run definitely lived up to it's reputation as the city's marquee event and it's clearly a well-earned moniker. Anyone considering this race should give it a try - challenging, rewarding, beautiful, and FUN!

Link to this review
Login or sign up to leave a comment.
Tim Murphy recommends this race
(2018)
"Such a challenging/rewarding race!" 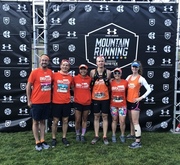 The Under Armour Mountain Running Series - Copper Mountain was easily one of my favorite trail races... ever. I don't make that claim lightly, but they just checked SO many boxes (I did the 25K).

Spectacular setting? Check.
You run up the Copper Mountain ski hills on exquisite single track trails, climbing steeply right out of the gate and enjoying phenomenal views of the massive Colorado mountains. There is a ton of climbing, and you go from about 9,500 to about 12,300 at the high point, so there is a lot of climbing and at VERY challenging elevation. But this was a high effort/high return situation, so I wouldn't have had it any other way.

Ease of access? Um - outstanding!
Copper Mountain was the perfect place to host this event. It's about 90-120 minutes from the Denver Airport, and the entire village sort of encircles the event, so packet pick up, shake out runs, start/finish line, tons of restaurants/bars/shops, post-race party, and everyone's lodging is all within a 5 minute walk. That created this very comfortable but concentrated experience where you kind of spend the weekend with everyone who's there for the race, and you get to walk 5 minutes to just about anywhere you want to go.
The post-race party also had a cool DJ, beer cart, and recovery area with a ton of vibrating massage tools that erased the damage I'd done to my legs and shoulders (due to my poor running form). And again, everyone's there because it's right in the middle of the resort.

Tons of BibRave Pros?
Haha - yes! See my attached pic - was so good to see so many BibRave Pros!

The medals and shirts were awesome - the guys' shirt was a super high-quality, somewhat heavy material in a long-sleeved hooded shirt (not a sweatshirt). Women's was similar.

Aid stations were about every 3-4 miles, and they were very well stocked. Course markings were probably the best I've ever seen - one thing they did that was really helpful was to use colored tape, weighed down with rocks to create a curve in the path whenever there was a turn that might be easily confused. As someone who regularly goes off course and blows past cones and hanging tape, this was a super obvious sign to turn this way or that. Would love to see other trail races adopt this method.

My race was just brutal - it took me 2:50 to run 15 miles, which for me is really not moving very well. I felt terrible on the ups, pretty solid on the downs, but in the end just couldn't move very well. I was carrying an intentionally overloaded pack to practice for an upcoming trail race, but even without that I don't think I would have moved very well.

I run a lot of trail races and this event simply had it all. I'd highly recommend it, and I hope to be back next year!