There really are no words.

First, I'd be remiss if I didn't include a link to our special episode of The BibRave Podcast all about my and my crew/pacers' race-day experience. There were a lot of highs and lows, and this is definitely worth a listen 😉 https://blog.bibrave.com/2017/10/03/bibrave-podcast-leadville-special/

Registration: I signed up for their training camp in order to lock in a spot for the 100 with my friend and cousin. This was SO valuable. The camp was eye-opening, very educational, so much fun, and I felt offered a lot of value. Highly recommend.

Aid Stations: Stop it. The aid stations at Leadville are SO well done. I had some stomach issues at mile 50 and they were able to assist or help my pacer get everything we needed to (eventually) keep moving. So well stocked, so full of expert volunteers, can't say enough.

Course: I mean, again, what can you say? Views on this course are everything you'd expect from a race of this stature. Views of Turquoise Lake, up and down Powerline, coming down into Twin Lakes, up and over and back up Hope Pass - all of it simply (and actually) breath-taking. Weather was amazing and I don't think the course could have been more favorable.

Race management: World-class. From safety and support to energy and fun, the Leadville Team is as good as it comes. To pull off a race this long, and of this size, with such grace is just crazy. Hat's off to the management.

Overall: Leadville is truly a special place and a special race. The town fully embraces the runners and spectators, showing incredible support and enthusiasm to have everyone in town doing epic shit. It's a commitment both from time and money, but the rewards easily outweigh any expense. If you're into the ultra scene, and you're feeling a "hundo" coming on, Leadville deserves a place at the top.

Pic: Pizza Steve, Me, Matt at the start of the Leadville 100

Link to this review
Login or sign up to leave a comment.
Tim Murphy recommends this race
(2017)
"As good as racing gets - views, trails, food, fun"

So many amazing things about this race, no wonder it's a lottery entry with hundreds on the waitlist.

The race is run almost entirely along the Pacific Crest Trail (PCT), treating runners to extremely well-maintained, gorgeous paths and breathtaking views of Timothy Lake, Mt. Hood, and classic Pacific Northwest forest. The actual trail is just prime - soft pine needles on top of mostly even, not-too-rocky dirt trails. See my pic below to get a taste of the views - just incredible.

Aid stations - again, showing what makes ultras great. Incredibly helpful volunteers and a huge spread of food which allowed me to practice eating a bunch of different foods while experimenting with different amounts of salt and sweet while easily getting enough calories. Plus, tons of ice for when the day got hot (it did, but not too bad - about 45/50 at the start and probably 75 at the finish but sun felt hotter).
At one point, a volunteer asked what I needed and when I told him water for my hydro-vest, he insisted I take it off and let him fill it and replace it in the pack while I went to power-eat. I came back and he was holding up the vest so I could put my arms through and be on my way. So helpful!

Overall - this was an "easy" ultra when it comes to vertical gain - only about 5,500. But most of that was on the back part which made it a lot more challenging. I ran it as a training run for the Leadville 100, so my training partner (Matt, pictured on left) took it easy for about 45 miles and picked it up from there to finish strong. My race couldn't really have gone better - I felt strong and well-stocked the whole way, and I clearly saw how much better I do by pushing the calories. Here's my strava file if anyone cares about that. https://www.strava.com/activities/1074301139

Highly, HIGHLY recommend this race, and I can't think of how a 50 mile race could be done better. Kudos to the race management - Go Beyond Racing - on another killer event.

Login or sign up to leave a comment.
Tim Murphy recommends this race
(2017)
"My first PTS Spring Race!"

Always a great time at the PTS! As usual, this was a well-run, well-attended Portland Trail Series event - great course through Forest Park with lots of hills and a FAST downhill finish. The route for this race was only about 4.5 miles long, but I think some of them get as long as 5.5 or so. Also as usual, some killer prizes raffled off at the end, compliments of PTS' sponsors (nutrition, Hydroflask, etc). Parking was tougher because I was running late, but I was still able to park very close to the Leif trail head and jog up to the start.

These races perfectly exemplify what trail racing should be about - good-spirited competition with a totally laid-back atmosphere in a beautiful setting. Can't wait till the next one!

Link to this review
Login or sign up to leave a comment.
Tim Murphy recommends this race
(2017)
"Magic all around!!" 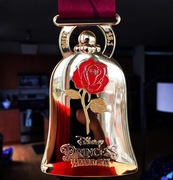 This was my second runDisney event, and it's safe to say I'm a full convert. There is just so much going on, so much to see, so much excitement from the massive group of participants, and the management of a major marathon. Seriously, these races are great for casual and serious runner alike!

I ran the Disney Princess Half Marathon (if still feels funny to say that) as part of the annual Running USA conference, so it was fun to run with the rest of team BibRave and to also see so many industry friends. Race morning was cool but not cold, and based on the heat and humidity we saw in subsequent Orlando mornings, we were damn lucky on race morning.

As usual, traveling to the race was a breeze, and by following recommendations from Disney re: when to get on shuttles, etc., we made it to the start line without encountering any traffic. Shuttle picked us up right outside our hotel, dropped us off near the bag check, and we began the long walk to the start. Frankly, this didn't bother me at all, and I appreciated the time to loosen up before the race.

The true magic, no, miracle of Disney is the number of Porta Potties. Not sure they'd love that brand association, but it's seriously the most PPs I've seen at a race by far! There were massive banks of them everywhere, and Jess, Julia and I basically ducked in whenever we wanted, just because they were there. This is a huge expense, so I was really impressed how all in Disney went on the bathrooms. Kudos!

Race course was pretty solid - we started in Epcot, ran through Magic Kingdom and back to finish at Epcot. Running toward a huge purple sphere is pretty cool, even if you're not a Disney person, and Cinderella's castle never disappoints.

Aid stations were great, though I didn't use them much. But they had plenty throughout the course. Lastly - the SWAG. So good - absolutely fantastic medal, a prefilled box of food for you to just grab on your way to bag pick up, and bag pick up took like 1 minute. Seriously, Disney just moves massive amounts of people around with out those people having to make a single critical thought - it's just mindless, and participants are free to enjoy the experience rather than worry about where to go. So nice.

My race - I was feeling sore but pumped for the race - pumped because RUSA had a challenge so I wanted to see if I could finish with a high place. I started at 6 minute miles and tried to stay there as long as I could, and if things went well, maybe go a bit faster toward the end. I was able to run at that pace pretty comfortably and gradually move my way up until I was in 5th place behind the 1st female and 3rd male. They were starting to slow down a bit, so I moved forward and finished in 3rd overall. I know the 4th male could have given me a hell of a run, but he was clearly having a ball running with the first place female. So much fun to see her cross, and all the characters were there to congratulate her on the win.

Again - highly recommend Disney races now that I've done more than one, and I definitely understand the hype.

Link to this review
Login or sign up to leave a comment.
Tim Murphy recommends this race
(2017)
"Misery and Joy" 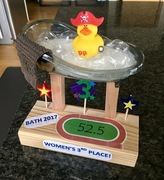 The organizers were thrown a curveball this year, having their course highjacked and ripped apart during a remodel. To preserve the 52.5 lap tradition, the organizing committee was able to secure a yard-track outside of Portland. While said track was in relatively poor condition, most of the field understood that this was a temporary solution and the 2018 BATH would feature a much more desirable course. Either way, kudos to the org for finding an alternative course and making it work!

Race day weather was typical of a February morning in Portland - cold and rainy. Temps were mid/upper 30s and there was a steady rain throughout the race. No such thing as bad weather, only bad gear though - right? Well, I should have opted for tights over shorts, but otherwise I was about as prepared as could be expected.

Beyond that, it was 52.5 laps of trying to not think about what you are doing, but also having to remember to click "lap" on your watch 53 times. I love this event because it provides a great way to race hard, be around a lot of runners of all talent levels (some serious talent showed up to this year's BATH - winner was just under a 1:12...), and even check in with people as the race progresses.

Aid stations were awesome - two tables set up for Elite-level fluid placement. There was also a warming tent at the beginning, which was critical gear storage during the rain. Some really solid amenities this year.

SWAG - my wife Jess took third in the female division, and her trophy was off the charts (pic below). While that isn't something everyone received, the creativity and craftsmanship really are worth noting.
Something everyone did receive? FREE RACE PHOTOS! The organizers were able to assemble some serious photography talent and runners were treated to some amazing race day photos. Running in the rain might not be ideal, but epic pics of you doing so ensure your legendary status will live on.

My race didn't go that well - started feeling some pretty severe hamstring issues (that's new) with about 20 laps to go, so I really just tried to keep pushing without getting myself into trouble. Finish time was 1:19:20, almost 3 minutes slower than last year.