This was my first DAV 5K and it will NOT be my last! Let's go over some specs:

Pros: BEAUTIFUL scenic, relatively flat course; the motorcycle cavalcade to start the race, was AMAZING; the servicemen and women who are out on the course cheering for YOU; lots of love

Cons: No timing or results (if this is important to you); not clear where pictures are being uploaded to

Parking for this race, really couldn't be easier. It cost $5, but you got an actual parking lot to park in, and there was PLENTY of parking, and all of it was less than a tenth of a mile from the start/finish line. Since I did race day packet pickup, I cannot comment on the packet pickup expo. I will say race day packet pickup was very easy. There were LOTS of post race free goodies as well, which was so nice.

During the race, it was SO amazing to see so many service men and women cheering for the runners. At one point, all of the motorcycle veterans who were in the cavalcade, lined up to give high fives and cheer, and you can believe I thanked every single one of them and high fived them all.

This race isn't timed, so have your own timing devices, if that is important to you. I will do this race again, hands down!

Link to this review
Login or sign up to leave a comment.
Corey Queen recommends this race
(2018)
"There Is NO Better Way to Celebrate Veteran's Day!!"

This was the first time I have run The Honor Run Half Marathon and it will not be my last! This was the 5th year of this charming race. Ok, let's cover the specs:

Race Director: Scott liked my media posts leading up to the race and had asked to meet me. When I met him race morning he gave me a handshake and a hug and thanked me. A Race Director thanked ME! That was pretty cool. I thanked him for putting on such an amazing race! Scott is very active on social media and with communicating with runners, so you never felt like you were "in the dark" or just another number.

Packet Pickup: Was at the Florence Mall, right in the center (per the website instructions). Super easy, VERY friendly volunteers offering encouragement to every single runner picking up their stuff (not just, "Name, here's your stuff."). Plus, it was a mall, so if you needed ANYTHING last minute, there's no way not to find it in the mall.

Volunteers/Aid Stations: 100% the best volunteers I have EVER encountered! Considering this was a 22 degree morning that felt like 12, and dropping, not one volunteer was complaining. They all offered encouragement (not the typical, "you're almost there") at every aid station. There was even a tissue aid station (cold morning, runny noses). There was Gatorade and water and it was cold, obviously, but they even went the extra mile and made sure every station had salt to spread around, since any water on the ground was pretty much going to turn to ice.

SWAG: The medal is BEAUTIFUL, with stuff on the front and back. And your bag that you get at packet pickup is FULL of useful swag.

Post race: You cannot say you left the post race area hungry or thirsty, unless you had allergies of some sort. Skyline is there with chili coneys, and there was a local high school there with sandwiches, and they had full bottles of Gatorade (the 1 liter), bubly and diet pepsi. When I say plenty, I mean enough that they were telling us races to please take cases of the above. They even had boxes for you to stuff your things into!

The extras: At the start of the race, Scott talks about this American flag that all of the veterans that they take to the memorials touch before they go. We were able to touch this right before we headed across the start line (on my personal blog review, I will include video), and that was AMAZING. Plus I had 2 different runners give me their chili coney's and thank me for helping them finish strong (they used me as a pacer the last mile or so, I didn't even know), HOW GREAT IS THAT?!?

Bottom line, I'm already thinking about this race next year and getting as many people as I can to do it.Warning, it does sell out so when registration opens for 2019, sign up!

Login or sign up to leave a comment.
Corey Queen recommends this race
(2018)
"This Race Stays Close To My Heart!!"

This race has always been close to my heart. One of the great things about this race is the effort that Race Director, Michael Clemons goes to make every single runner feel loved. Use your hashtag when posting on social media, and not only will the race like it (he runs the account, personally), but they will comment on it. This is a rare race: it is a MUST if you have never done it, and it is a MUST if you have done it. The aid stations were amazing as well. They cheered every single runner on and were so amazing!

Link to this review
Login or sign up to leave a comment.
Corey Queen recommends this race
(2018)
"My First Big Ten Network Big 10K!" 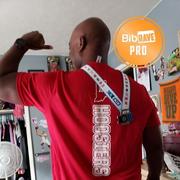 The weather, which was in the 80's and humid, also featured a nice Lake shore breeze to help cool you down. It was great running weather. Also, Bill Murray was the Master of Ceremonies, so having him launch out your corral is pretty amazing.

This is Chicago, so that means relatively no inclines, which coming back from an injured knee, I greatly appreciated. A weird thing about this race is, as packed as it is with runners, it is a relatively quiet race. Looking at my footage of the race, you can hear the boats out on the lake, it is so quiet. It's the first race I did, where even though spirit is encouraged, the runners don't really talk to each other. This is neither good or bad, just giving a heads up.

Even though I don't have a Big Ten school, I picked IU because it is close to me. But it was fun to see so many people representing their schools. I not only recommend this race, I recommend getting your friends together to enjoy a weekend in Chicago!

Link to this review
Login or sign up to leave a comment.
Corey Queen recommends this race
(2018)
"Everything a Large City Race Should Be!!" 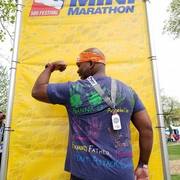 This race is a MUST for any and all runners. I can't say enough how excellent the IndyMini crew does with this race. It is also Indianapolis, so no hills. From the moment that you walk into the expo to the moment you are hanging out at the post race party, you are made to feel loved and wanted, as a runner. Please check out my full video review, where I talk about how amazing this race is!! I will run this race very year.