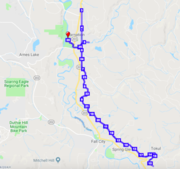 I signed up for this, my first marathon, because I am a big fan of The Oatmeal and his comic about the Blerch really speaks to me. I figured that it would be a pleasant setting, with great emotional support, and cake. Cake makes everything better. So on a whim, I registered.

The expo is less of an expo and more of a simple packet pick up. It took place at a Road Runner Store in downtown Seattle. No lines, no complications, no frills. That's fine. They also had Blerch and Oatmeal merchandise available for purchase. The tshirt was cute and you also get a Blerch stress squeezie, a bumper sticker, and some Trolli gummy candy. Because gummy candy.

Also at packet pickup, the volunteers mentioned that a cougar had been spotted on the trail about a week earlier, so it might be advisable to run with a bell or cougar spray...

WHERE THE HELL AM I SUPPOSED TO FIND COUGAR SPRAY? No one could tell me, so I just bought a bunch of bells and sewed them on my running skirt. Ended up using my backup bells (I *really* didn't want to be mauled by a big cat at my first marathon. That doesn't make for great cocktail conversation) as my sewn-on bells all fell off by mile two. And I kind of sounded like Santa's sleigh... but I didn't get attacked by a cougar!

As we were lining up to start, I got a little nervous, but between encouraging words of the other runners and Matthew Inman's amazing opening prayer - all hail the wondrous marshmallow and the venerable funyun! - I settled in and was pumped to go.

The marathon course starts and ends in Tolt-MacDonald Park in Carnation, WA and consists of a series of out and backs - a couple of miles north, a half mile east, and then 10.5 miles to the south - along a mostly dirt and gravel trail. The east-west out and back has some slightly larger rocks, but it's quick enough done. Because there are multiple races going all on the same day and largely on the same trails, the marathon starts first with the half about 75 minutes later and the 10K about 45 minutes after that. Consequently, one encounters runners at various levels at various stages of the race, and every one of them was awesome.

There are nine official rest stops, but in actuality it's five locations, four of which do double duty as rest stops as they are encountered in either direction. Each is fully stocked with enthusiastic and helpful volunteers, water, electrolyte beverage, clif shots, cake (yes -and it is so very very good), and nutella sandwiches (ditto). The station at the far end of the course even had potato chips, which were a godsend as they provided some much needed salt. About half the stops also have couches and blerches. Couches are self explanatory, blerches are best explained by The Oatmeal himself: http://theoatmeal.com/comics/running. I stopped at each and every stop and sat on every couch. Took water at each and alternated between taking nutella sandwiches and cake. Not exactly prime marathon behavior, but whatever, there was cake and it made the day more pleasant. Did I mention how delectable the cake was?

The course is gorgeous, the people friendly, the cake delicious, almost no cougars along the trail, and there's a glorious seven hour time limit. I learned that it is truly amazing how a stranger in a globby cherub suit encouraging you to relax and stop running can give you the extra push to keep going. The marathon field is fairly small, so you begin to notice and know the people around you and those people also help keep you going. I would do it again in a heartbeat.

As for downsides, it did briefly rain, which was a downer, but that cannot be controlled. Also, about a mile and a half of the long leg of the course runs alongside a shooting range, something that I didn't know until the gunfire started. Disconcerting at most, but I don't think we were ever in any danger of a stray bullet.

Link to this review
Login or sign up to leave a comment.
Heather Edmands recommends this race
(2018)
"Hot and Hilly" 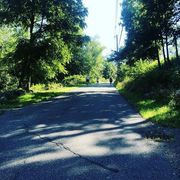 The Harvard 5 miler occurs in conjunction with the town's 4th of July festivities. In addition to the 5-miler, there's also a mile race for kids. I'm not a fast runner and most of the participants are; even so, the organizers are friendly, the water stations are encouraging, and they have a staggering variety of snacks at the end: Maple Water, popsicles, fruit, water, muffins. It's glorious.
There is a slight hill. And by slight hill, I mean bane of my existence, why am I doing this, if I stop running, do I just have to live on the side of this hill forever? hill. It is steep and it is long. Possibly, it is evil. But it does eventually end. And the scenery is beautiful.

But that hill. I hate that hill a lot.

Link to this review
Login or sign up to leave a comment.
Heather Edmands recommends this race
(2018)
"Perenial Winner"

The Mini is my home race- I've done it 11 times and have taken to signing up for the next year by the end of the current year's expo. It's a giant race - upwards of 35,000 participants - but it is so incredibly well supported, it is easy to forget the magnitude. In 13.1 miles, there are SEVENTEEN aid stations. If you walk away from this race dehydrated, something has gone horribly wrong. But the support is not only traditional course support - the community tends to turn out in droves as much of the first half of the race and the last third are in residential areas. So many high-fives.