EXPO: I picked up my 5k & Half Marathon numbers right before the Friday Fright Night 5k. The expo was quick and easy to work through and there were quite a few people there just lining up for the upcoming 5k. By running a race on Friday evening and then another distance on Saturday, runners were able to earn an extra "Monster" Medal - pretty cool!

RACE SWAG: The 5k, Half Marathon and Monster medal all had a cool, monster-themed design. My kids thought they were awesome!

COURSE: The race starts and ends in the Fargo Civic Center, which is very nice for the chilly evening and morning races. With a race this late in October, it could definitely be snowing and the indoor start will be perfect for that. The Half Marathon course was marked better than the Fright Night 5k though there was still one questionable turn. Thankfully the 1:30 pacer directed me on which way to turn. There were a variety of different pacers available to stick with and the course did have quite a few turns.

AID STATIONS: Aid stations with water were available for the Half Marathon. I was looking for sports drink here or there but didn't run into any. The volunteers were amazing!

POST-RACE: After the half marathon, there were bananas, water and trick-or-treating candy to snack on along with a post-race beer if runners preferred.

LOGISTICS: Parking at the Civic Center Ramp was the best option for getting to the race and I wasn't charged for parking there! Besides that option, a parking spot can be tricky to find in the downtown location of the Civic Center.

Link to this review
Login or sign up to leave a comment.
Amy W recommends this race
(2022)
"Friday Fright Night 5k" 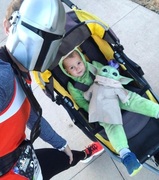 EXPO: I picked up my 5k & Half Marathon numbers right before the Friday Fright Night 5k. It was a quick process and the expo/pre-race area was in the Fargo Civic Center and set up really nicely.

RACE SWAG: I ran the 5k along with the half marathon the next day to earn a bonus Monster medal. The medals had a cool design and also included a long-sleeve black technical shirt.

COURSE: The 5k race starts and ends in the Fargo Civic Center, which is very nice for the chilly evening and morning races. The Fright Night 5k started at 6:30 and the sun set during our run. The weather was perfect and the course had a variety of scary characters that jump out at you - hence the Fright Night :) With the lead bike following the 1st place guy running a 15-minute 5k pace, I was off in "no man's land" and definitely got lost a few times (with my stroller + toddler, he didn't seem to mind). I finally gave up and just waited for the guys behind me . I would rather get lost as a group! I was nervous a few times, wondering if we were on course for the next day's races instead, but we did eventually make it!

The toddler & I blew straight past the Civic Center finish line entry but turned around and ended up finishing 3rd. Getting lost is frustrating! Hopefully this will be marked better next year - even with glowing signs or something cool like that, because the dark added to the navigating issue.

AID STATIONS: No aid stations were needed for the 5k (of if there were some, I didn't see them!).

POST-RACE: Bottled water and trick-or-treating candy was available post-run. My toddler/stroller passenger was very pleased with that!

LOGISTICS: Parking at the Civic Center Ramp was the best option for getting to the race and I wasn't charged for parking there! Besides that option, a parking spot can be tricky to find in the downtown location of the Civic Center.

Link to this review
Login or sign up to leave a comment.
Amy W recommends this race
(2022)
"Finally checked the Dick Beardsley off my bucket list! (but I will be back!) "

The Dick Beardsley has been on my bucket list for YEARS and I was so excited to run there this year! It certainly did not disappoint.

EXPO: My family and I camped at the American Legion Campground, which is right by the Kent Freeman Arena. After getting the camper parked, I headed over to the expo with a couple of our kids. The expo was very small - no vendors - and quiet (at 6:30 pm). Picking up my packet was very quick! They do have a pasta feed on Friday night and I would like to try that next time I run here.

RACE SWAG: The medal for this year had a great design and feels very high quality. The Half Marathon shirt was a nice blue long sleeve and I am super bummed that I forgot mine in the stands after the race :( The design is amazing!

COURSE: The race starts and ends in the Kent Freeman Arena, which is very nice for those cool fall mornings. They had pacers available for certain goal finish times as well. The course definitely did have those rolling hills and I ended up with about 317 ft of elevation gain. Overall, the course was beautiful - I really enjoyed the lake and looking at the homes there. It was an out-and-back this year due to construction and I didn’t even mind it. I had runner company basically the entire race!

AID STATIONS: I think we had aid stations ever couple miles or so - there were plenty! I mainly took advantage of the water or sports drinks options. There were also gels available at some point, too. The volunteers were amazing!

POST-RACE: The finisher’s table featured COOKIES and ICE CREAM! Yes! Along with bananas and water. The ice cream seriously tasted home made - so good.

LOGISTICS: As I mentioned, we camped at the American Legion Campground about .5 of a mile from the Kent Freeman Arena. This was PERFECT. The campground was quiet and a few runners also camped there. The area felt safe and they had very clean bathrooms and showers available only to campers. I would camp for this race again!

The Dick Beardsley is a great race experience! The size of the race wasn’t overwhelmingly huge but they sure had some fast runners out there. Add this one to your Fall race list! P.S. They have FREE race pictures :)))

Link to this review
Login or sign up to leave a comment.
Amy W recommends this race
(2022)
"Well-Organized Race, FAST Course"

I've said it before and I'll say it again: I LOVE Fargo! This was my fourth year running the Full Marathon and my third time having a break-through, PR race. Run this race and you're set up to run fast!

EXPO: The expo was pretty quiet when my husband and I came in the mid-afternoon, which was great. This was a big 10-year anniversary "get away" for us, so he had Friday off of work and the kids were with grandparents! I picked up my lanyard to access the Elite Athlete staging area along with a key to the apartments we stayed at on the NDSU campus (across from the Fargodome). There were numerous computer stations to "check in" to get your race number and a person was there to help as well. This made picking up your number very streamlined! The expo had some vendors and a few snacks, which was nice. It wasn't as big as it was pre-Covid, but it was still nice just to be back to racing in person again.

RACE SWAG: The medals are always an excellent quality and nice design - Fargo does this so well. For the full marathon, we received an awesome, cozy race jacket w/ a quilted front and zip pockets. That was especially helpful considering how chilly it was over the race weekend! Runners received a drop bag along with a number tag for it.

COURSE: With all of the flooding in this very wet spring, I do not envy the responsibility that race directors have! They had to adjust the marathon course a couple times due to flooding and I appreciate that they did their best. The course had quite a few turns but we certainly weren't running in any standing water.- so job well done, race staff! Fargo is a pretty flat course, which is nice for running a fast race. I ran with runners for the first half and then was mostly solo for the last half, which gets a little lonely. Usually I'm always by someone in Fargo, but the runners around the 3-hour pace did spread out quite a bit. The cheering fans and music do help to lift the spirits though! I did run a 5+ minute PR and was so happy with that.

AID STATIONS: Fargo has plenty of aid stations! When I checked out the map prior to running, I thought they were at every odd mile or so. While racing, it ends up being plenty and they offer water & sports drink. Energy gels were offered at select stations as well.

POST-RACE: My appetite struggles after a hard effort but I couldn't resist grabbing some post-race food to snack on later! They had a selection of donuts, potato chips, chocolate milk, bananas, water and probably a couple other things I'm missing, too. Very tasty!

LOGISTICS: Whether I'm staying close to the start line or having to drive in, Fargo is fairly easy to navigate on race morning. They do have a race shuttle option that I have used in previous years, too. For the Elite Athletes, they offered complimentary housing on campus. I would definitely stay there again. The rooms aren't fancy but it's a quick walk basically across the parking lot to get to the race in the morning. That takes a lot of stress off before racing!

I highly recommend Fargo and plan to be back in 2023. Oh and don't forget the FREE race photos - that's a huge perk!

Link to this review
Login or sign up to leave a comment.
Amy W recommends this race
(2022)
"A unique challenge to boost your run motivation!"

The PAC-MAN Virtual Challenge: Level Up 2022 was a fun way to kick-off Spring racing! The PAC-Man theme is awesome and nostalgic. I haven't received the race swag yet but it looks SO cool
- my kids are arguing over who gets which PAC-MAN pieces! Having separate levels to complete and an extra special "Bonus" level was a great motivator for me! As mostly a solo runner, a virtual challenge is an extra "kick in the tail" to lace up the shoes and get after it.