Preston Ramsey recommends this race
(2021)
"How SWEET It Is"

This was the SECOND Hot Chocolate event I've signed up for, but the FIRST in which I've actually been able to participate! With that said, I do wish I would have been able to run this event in-person in Detroit, but virtual runs have become the norm and this race is no different.

I was able to head out to on of my favorite local parks that offers some amazing views along with very well maintained trails to knock this run out. The 15k is such an odd distance, but I've run so many 5k's that it's nice to get after something different for a change! For me personally, the swag is what definitely made this event stand out - a really slick jacket, a well-designed medal (with a surprise inside!), as well as the obligatory hot chocolate mix. You can't go wrong with that combination!

I would definitely recommend the Hot Chocolate series - in-person OR virtual - to anyone looking for a fun event that takes its name seriously!

Link to this review
Login or sign up to leave a comment.
Preston Ramsey recommends this race
(2020)
"A Love SUPREME! "

I decided to go all in and sign up for THE SUPREME challenge. This challenge series consisted of a 1-mile run, 5k run, and a full marathon and these three events would have taken place over two days. Since it was virtual, I spread them out of three days instead - making it a Friday, Saturday, Sunday affair. In fact, I was able to utilize a hybrid version of my "home" course in Columbus to run the virtual full marathon!

The race organizers were very good with keeping participants excited and informed with timely communication, via email as well as via social media. I did have to dig occasionally in my spam emails for race messages, but that's no fault of the organizers.

The swag - specifically, medals and shirts - arrived on the Saturday of race weekend...right about the same time I was wondering if they would show up at all that weekend! The timing could not have been better - just after I finished my 5k on Saturday. The 1-mile and 5k medals were practically the same, which was a little disappointing, but the marathon and challenge series medals more than made up for that.

I won't lie - I still want to run this race in person and fully intend to do so within the next year or two. I want that experience of running over a river into Canada and then back into the U.S.A. via a tunnel going UNDER the same river. I want the crowd experience.

Detroit is a great city (as is Windsor, Ontario, Canada) so why not give the Free Press Marathon a look if you're looking for a fall 2021 marathon - I know I am!

Link to this review
Login or sign up to leave a comment.
Preston Ramsey recommends this race
(2020)
"Running to Rundown Cancer!" 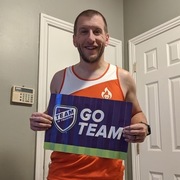 Cancer sucks. Thankfully, there are organizations out there that do all they can to kick cancer in the face. The organization that immediately comes to mind for ME is The Leukemia & Lymphoma Society (or LLS) and Team in Training.

I ran with Team in Training in 2019 for the Chicago Marathon. Running that particular marathon is a big deal, but running as part of TNT absolutely made the weekend even more amazing. I'll always support good organizations doing good things for good people and TNT is no exception. They made me feel like part of a family - a freakin' huge family - and I will never forget that.

This September, the TEAM recruited runners from around the world to participate in the Resilience Challenge - to come together show resilience in the on-going fight against blood cancers. The challenge was two-fold 1) run/walk/move at least 50 miles in September and 2) raise money to support Team in Training. However, it should be noted that it was free to participate in the challenge and there was NO fundraising minimum.

In addition to participating as an individual, I created a team - Team Strive for the Highest - which was composed of family and friends. The TNT web platform allowed us to keep track of our mileage and fundraising, while also keeping our fellow team members accountable. While our team may have come up short on our fundraising goal(s), each one of us absolutely blew the 50 mile challenge out of the water!

On a personal note, my family has been affected by cancer multiple times. It doesn't get any easier, but knowing that there is a group of people working day in and day out to beat cancer gives me hope. I would strongly recommend that YOU consider joining Team in Training for a future event - perhaps even the Resilience Challenge the next time around!

Link to this review
Login or sign up to leave a comment.
Preston Ramsey recommends this race
(2020)
"Running the (Virtual) Fly! Fight! Win! Challenge" 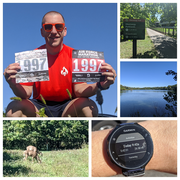 This race has been another on my list of "must runs" for a while now, especially since I grew up relatively close to Dayton and the Air Force Museum - where the event is typically held. This year's event was moved to a virtual event as a result of the COVID-19 pandemic, so this review will not include many of the typical items, but I will say this - BIG PROPS to the race organizers for still putting on a fantastic event!

COMMUNICATION - The race management did a A++ job of keeping participants in the loop and engaged across all platforms. Consistent emails and a great social media presence definitely helped build energy leading up to the event.

VIRTUAL EVENT EXPERIENCE - I didn't really know what to expect here, but again - the organizers knocked it out of the park. A centralized online location to "participate" in the race expo, upload results, download race bibs, and even open a video with the national anthem just to name a few of the ways the event went above and beyond to give participants the race day experience.

THE RACES - Participants could register for the 5k, 10k, 13.1, 26.2 mile distances OR could do a challenge series which included 3 of the four distances (5k/10k/half OR 5k/10k/full). There was also a 1k kids run option available. ALL distances and challenge events were available for the virtual version of this year's race.

SWAG - Every year, the AFMarathon features a different aircraft as the highlight of their swag, with that aircraft prominently displayed on the medal and shirt (and other pieces as well). As of this review, participants have not yet received their SWAG, but the shirt and medals look great from what I have seen online. I look forward to updating this portion once I receive those items.

OVERALL - Despite this event being virtual, I am still more than pleased with how things went. I still felt as if I was in Dayton, participating with thousands of others, even though I was running around my own community in central Ohio, a mere 75 miles away. Very glad to have been a part of this event and I look forward to running IN-PERSON next year on September 18, 2021!

Link to this review
Login or sign up to leave a comment.
Preston Ramsey recommends this race
(2019)
"Oh Fudge!" 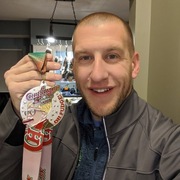 This race has been on my list of "must runs" for a while now, and I FINALLY got to do it! After a very stressful 2 hour drive from Columbus to Cleveland on race morning (read: I woke up later than planned and was pushing it to arrive on time - but I made it with a little time to spare), it was time to get my Christmas Story on!

PARKING - First up, getting downtown for this race was MUCH smoother than I anticipated. I thought there would be big traffic issues and I was dead wrong. Got to CLE with maybe 30 minutes to spare before race start and had no problem finding a place to park. In fact, I was able to park in one of my go-to locations that my wife and I use when we travel to downtown CLE for just about anything.

PACKET PICK-UP - Walked over to the Renaissance Hotel to pick up my packet which, like the parking, seemed like it would be much worse than it was. The line to get into the room where runners collected their bibs wasn't TOO long, but it definitely wasn't short. The saving grace was truly the fact that race staff was moving with the quickness! Still had some time yet before the start, so I headed out to Public Square to meet up with Amy and Jackey - fellow BibRave Pros!

THE RACE - The race itself is pretty simple when you get right down to it. The 5k is a point-to-point and the 10k (the race I ran) is an out-and-back. The race starts at Cleveland's Public Square and follows a pretty straightforward course to the Christmas Story House. What really gets your attention on the course - besides the two bridges with AMAZING views - are the fantastic costumes! So. Many. Bunny. Onesies!

MEDAL & SWAG - The medal is pretty neat and captures perfectly the "Oh Fudge!" sequence from the movie. The medal is almost covers my palm completely, so it's not small! The SWAG for this race included a red long sleeve cotton shirt in addition to a green drawstring bag. The shirt is nice, but personally would have preferred a dri-fit or other tech-type shirt. Aside from that, the random LED light bulb we were given in the swag bag was unique, but hey - free bulb! One of the best perks of the race itself is that each runner gets free admission to the Christmas Story House & Museum on the day of the race (a $13.00 value). This perk is cool, but be ready for a LONG, LONG line on race day. You're almost better off collecting your bib early in the week and visiting the House beforehand (if possible?).

TRANSPORTATION - the organizers are very good about ensuring those of us running the 10k had a way to get back to the House if we wanted as well as making sure the 5k'ers could get back to their cars downtown. HOWEVER, again, LINES. There are a LOT of people in a tight neighborhood with not a massive amount of buses (but a decent amount) all trying to do the same thing at the same time. Have a backup plan to go either direction. I ended up walking back to downtown Cleveland with my friends Amy G, Jeremy, and Jeff and their dogs Bucky and Einstein.

OVERALL, this race more than lived up to my expectations and provided a great experience. The things I enjoyed significantly outweighed anything I might not have - and that's a good thing. I would definitely recommend that you check out this race, especially if you're a fan of A Christmas Story!