Vanessa Junkin recommends this race
(2022)
"Had a good time pacing! " 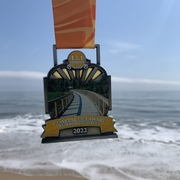 This race is always very generous with swag. Runners received a shirt and pint glass, and then, upon finishing, received a finisher medal and BOCO Gear finisher hat. There are also free race photos and a post-race party at Grotto Pizza with a full buffet and beer.

Parking was easy and free at this time of year. (It was a little difficult to park for the expo and I parked a few blocks away, but I got there early race morning and it was fine.) Aid stations along the course were plentiful.

The race was well-organized. The only thing was that one mile marker was picked up early, which made pacing slightly more difficult, but it wasn't too big of a deal. Everything went smoothly and I hope to pace this race again next year!

Link to this review
Login or sign up to leave a comment.
Vanessa Junkin recommends this race
(2022)
"Great to be back to normal this year for my hometown half!"

It was great for the Salisbury Half Marathon to get back to "normal" this year after the pandemic made the 2020 race go virtual and the 2021 race have gathering restrictions (though it still went on, which was nice!). The race is held in my hometown of Salisbury, MD, and I am the coach for the race — I provide training plans, check in with runners and answer questions. I was given a free entry for this.
It's actually so close to my house that I did not rate parking/access because I walked to the start. There is a short walk from the parking area, but parking is free. If you park downtown, you'll have a half-mile-ish walk to the start and will be near your car at the end. To get back to my house, I walked a mile.
There were plenty of aid stations, and they all had plenty of volunteers and items. The course is rural, but I'm also very used to these roads. My favorite part as far as scenery is the end of the race on Riverside Drive into the downtown area. The marathon, which I ran in 2019, is much more rural than the half marathon.
There wasn't really an expo — just packet pickup on Thursday and Friday. My running club set up a table both days, and on Friday, there were some running items for sale.
Swag included a casual-wear shirt, a mat-style picture frame, a sticker with your race distance and free race photos, along with the finisher medal. The finisher medal is the same for all distances, with a different ribbon that has the distance on it.
This year, runners got two free beers (with the option to choose a beer from a local brewery, Evolution) and pizza, along with water, Gatorade and snacks. I liked the addition of the pizza! The downtown area is closed for people to hang out in.
This is a flat course with a few minor hills, probably mostly noticeable if you live in a flat area like I do.
I thought race management was great — plenty of communication, a live Q&A before the race and an athlete guide with all the details.

Link to this review
Login or sign up to leave a comment.
Vanessa Junkin recommends this race
(2022)
"Hilly, cold and fun! "

I ran my second PHUNT 25K on Jan. 15. It was 16 degrees at the start, so it was a cold morning, but it was, as expected, a well-run race. There was plenty of communication from the race director ahead of time and afterward. It was also a covid-safe event, with vaccinations required, masks required indoors and an early start option.
While I'm sure there are hillier races out there, this race is extremely challenging for me. I live in a flat area and the 25K had nearly 2,000 feet of elevation gain. It's also on trails — mostly singletrack trails. My average pace was 18:20 on my watch (18:44 on the results). I did the early start, but I wouldn't recommend that if you are a slower runner like me, because I had to keep pulling off to the side to let people pass on the singletrack.
My friends and I drove up that morning. Parking and packet pickup that morning were super easy. Parking is free.
Swag was a neck gaiter and the finisher Phuckle (for finishers), along with an emergency blanket. So it wasn't a ton of swag, but I personally prefer less swag for a more affordable race. I believe this race was just $40 (I signed up in 2020). There was also swag for sale.
The aid stations were great, there were free photos provided by photographers along the course, and the course was well-marked.
This is a fun and challenging event with a great community!

Login or sign up to leave a comment.
Vanessa Junkin recommends this race
(2021)
"One of my favorite races - a great return for 2022!" 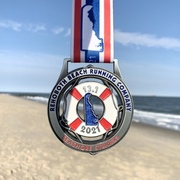 This is one of my favorite races! I have run it every year it has been held in-person since 2013 (no in-person event in 2020). This was also my third year pacing the half marathon. This year, I paced the 2:45 half marathon.

The race is normally held the first Saturday of December, and the weather was particularly beautiful this year (50s). I drove up from my house, which is about an hour away, that morning. I arrived around 5:50 for the 7 a.m. start (I had to be there at 6 a.m. for pacing) and I got a parking spot extremely close to the start. There were plenty of parking spots available, and parking is free in the offseason. It was easy to pick up my bib and shirt on-site; a line formed as it got a little later. There is also packet pickup and a small expo the day before the race.

The swag this year was a tech shirt and the finisher medal. I always love the shirts from this race. I got a long-sleeve light teal shirt. In 2019, the women's shirts ran especially small, so I put a women's XL instead of a L on my registration. That worked well for me.

I've never won an overall or age group award at this race, but there are life preserver awards for the overall winners and nice awards made out of glass for the age group winners. I actually care more about food than swag, so I'm giving this a 5/5 for the swag in addition to the post-race food and beer.

The course changed from previous years. This year, it went a different way through town and took runners on the boardwalk before heading up to the Gordons Pond area and back, and then to the Junction & Breakwater Trail, which has another turnaround. I enjoy the course and like the views.

There were plenty of water stops with helpful volunteers. The race is very flat; a few bumps, but no significant hills (coming from someone who lives in a very flat area).

Race management is always great. It was so exciting to have this race come back after a year off because of the pandemic. The post-race party is always fun, and there is so much food at the end: waffles, biscuits and gravy, bacon, sausage, hot dogs, mac and cheese, veggie burgers, coleslaw, potato salad and cookies. Each runner also gets three beer tickets for Dogfish Head beer (the beer is on-site, but the Dogfish Head brewpub is pretty much across the street). This year, there were also Truly seltzers offered. There is also a DJ and dancing.

I highly recommend this event and hope to be back pacing in 2022! Sign up early to avoid price increases. The price does get high in the few months leading up to race day.

Link to this review
Login or sign up to leave a comment.
Vanessa Junkin recommends this race
(2021)
"A great return to big-city racing! "

I ran the Philadelphia Marathon for the first time this year. I had originally signed up to run this event in 2020, but it was canceled because of the pandemic. So I was excited that it was on for 2021! Runners had to be vaccinated, which I supported.

The crowds for this race were amazing, and it's something I have truly missed during the pandemic. Because my name was on my bib, I got a lot of personalized cheers, and there were many fun signs to read.

I've heard this race referred to as "flat," and while it isn't the hilliest race I've done, there were certainly hills. The course had some changes because of construction. Elevation corrections on Strava and Garmin showed 650 feet and 998 feet of gain, respectively, so I'm not sure exactly how many feet I climbed, but it was not as flat as what I am used to at home in Salisbury, Maryland.

Until Mile 8, the course seemed flat. I enjoyed running through the city. There were then a few loops in park areas. The toughest part of the course was an out-and-back from approximately miles 16-25, and then the course continues on the same road to the finish line. There seemed to be a gradual incline going up toward the turnaround, and the scenery didn't change much on the out-and-back until we turned around in Manayunk.

The expo did not have a ton of vendors, which doesn't really matter to me, but I really liked that there were some speaker sessions/meet-and-greets, so I gave it a "5" rating. I was able to hear from Meb Keflezighi, Aliphine Tuliamuk and Bart Yasso, and then meet each of them afterward and get photos with each. Meb and Aliphine signed my bib.

The medal is really nice and is gold with a ringing Liberty Bell. The other swag was a long-sleeve tech shirt. It's nice, but nothing out of the ordinary.

I thought this race was managed really well, particularly since it was the first edition since the pandemic began. I felt I had all the info I needed via email, it was super quick to get my bib and shirt, there were security checks, and everything seemed to run smoothly. I did have to wait in line for security before the race began, and there didn't seem to be enough people doing the security checks, but it did not impact how I felt about the race. The race was also interactive on social media and was able to bring in pro runners, as noted above.

I didn't rate Parking/Access because I stayed in an Airbnb that was about a mile away and walked to the start.