I have written extensively about this race on my blog here (link in my profile) so I will just try to do a quick breakdown here.

First off, highly recommend! This was an incredible relay experience. I took on this challenge with a team of 5, which, was obviously doable, however, just having a 6th would have been a world better. You can have up to 8. The GAP Trail itself is amazing and easily run by any skill level - it is in no way technical being primarily hard packed surface - trail shoes not necessary even. The scenery (what we saw as 11 of the 24 legs were in the dark) was absolutely beautiful. Just looking around makes the miles go by quickly.

The first half of the race (at least going from Cumberland, MD to Pittsburgh as I hear they swap it every year) the first several legs were uphill - especially leg 3 which of course ended up being mine. You gain almost 800 ft over 7 miles, but this was by far the most. The 2nd half of the legs were mostly downhill or flat with the occasional incline over a bridge.

The exchange points were stocked with snacks and drinks sporadically, always something but you never quite knew what so I would consider them more as treats rather than course support. You are going to want to bring your own fuel and water for sure and just supplement with what is at the exchange points. Some had real food, others just candy, one, Ramcat (leg 11) was like a magical oasis with hot food and goodie bags.

Exchange points were a challenge to get to at times with being along a trail primarily through the woods with often very iffy cell coverage so make sure you have printed directions and a person who can read them well.

Race management communicated often before the race and everything you needed to know was provided well in advance. My only slight complaint was that there wasn't much of a finisher party (we got beer tickets and 50% off an appetizer at a near by restaurant) but to be honest, by the time we were finished, we were all pretty exhausted. Overall, I would say if you are even considering this race, go for it!

Link to this review
Login or sign up to leave a comment.
Lissa Nypaver recommends this race
(2022)
"Be the GOAT, at Home" 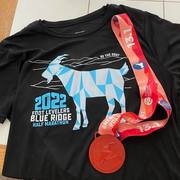 I was unable to make it to Roanoke and was excited that the Blue Ridge Marathon races had a Virtual option. The race did have a minimum elevation requirement, which was a cool addition to most virtual races, which made sense since so much of the Blue Ridge race in person is conquering the mountain. I must admit, it was a bit difficult to find the required elevation here in SC, but I managed to find a trail with a good amount of climb. I had fun documenting my race day and ran it "with" a few others virtually to make it more fun. I received a really cool medal and a nice tech shirt after the Virtual race wrapped up (you could run it anytime in the month of April).

Link to this review
Login or sign up to leave a comment.
Lissa Nypaver recommends this race
(2022)
"Great to Be Back UPtown"

It was great to be back to a live Hot Chocolate 15K this year. My crew and I gathered early, half of us running the 5K which starts 30 minutes before the 15K for some reason, and took some pics and hung out a bit before the start. Everything is really really well organized and the race is held at First Ward Park in Charlotte which is surrounded by easy and affordable parking. You can even ride the train in, which many of my friends did.

The course is a bit of a beast, but hey, that is Charlotte racing for you. There's a reason we have an UPtown instead of a downtown. It's hilly, and there is an uphill finish guaranteed for pretty much every race. The last quarter mile can get you if you don't leave something in the tank.

My only negative comment on this year's race, which was unusual for this year, was that I think maybe an aid station got skipped as the first one wasn't until close to the halfway point of the race. Having to go 4.5 miles without water after a long start had me suffering a little, especially in the 3rd mile. There were 3 total aid stations and the other 2 were spaced fairly closely after, so it really did seem like there should have been one more around mile 2 - 2.5. I heard many runners, including the pacers, comment on the lack of early water. If you worry about that kind of thing, you might want to carry your own water. The aid stations that they did have had water, Nuun and some kind of candy - gummy bears, M&Ms and marshmallows in that order. I did grab a cup of gummy bears, dumped them into my pocket and spent the rest of the race sucking on two at a time for a much needed sugar boost.

As always the finish line experience is AMAZING at Hot Chocolate races. The announcer calls everyone's name, lots of kind volunteers hand out medals and bottles of water, and the main event is just up the road, the Hot Chocolate Goodie bowls. So GOOD. And the jackets are always amazing. I think this year's was my favorite. But I do kinda say that every year. PLUS, free finisher photos that arrived in my email before I even got home! Overall, the race, as usual, was awesome. This was my 5th year, so I also got a really cool Silver 5 Year Legacy Mug and Hot Chocolate Bomb. It will for sure not be my last year, not by far. Despite the hills, you know I will be back in 2023!

Link to this review
Login or sign up to leave a comment.
Lissa Nypaver recommends this race
(2021)
"Running in Costume (and in the Rain)"

Full disclosure, one of the big reasons I registered for this event was the adorable swag. It was seriously cute. And lots of it. Everything was amazing quality (the shirt is amazing soft) and came in plenty of time before the week of Halloween when I intended to run my race.

My Thursday night Run Club (hosted by Rock Hill Brewing Company) was planning a costume run the Thursday before Halloween (Oct. 28) so I figured that would be perfect. Then I wasn't the only crazy running around Rock Hill in costume.

It took me awhile to decide what to run in. I narrowed it down to Purple Crayon or Snow Leopard (both recycled costumes from my daughter's stash) but ultimately decided on the Snow Leopard for 2 reason - 1) it was fairly cold and a bit rainy on my chosen race day and the Snow Leopard costume was warmer and 2) I ran as a Purple Crayon the year before and didn't want to repeat.

Unfortunately, it was pretty rainy that night, but I'm a runner and we run rain or shine. Though our group was pretty small that week due to the rain, so I guess not everyone shares my opinion. Oh well, fun as still had! My 5K time was ok, I tend to take things a lot more cautious on wet roads, but most of all I had fun. I got some strange looks from people in downtown Rock Hill running in the rain as a Snow Leopard, but whatever! LOL!

Overall, it was an awesome time, and I totally would recommend doing this Virtual again. The race kept in regular contact, posted frequently on social media and encouraged participants to interact with them with hashtags as well.

Link to this review
Login or sign up to leave a comment.
Lissa Nypaver recommends this race
(2021)
"Why Drive it When You Can Run It?!"

This is the 2nd time I ran the Around the Crown and it is truly a cool race. They shut down the 277 loop of the interstate that circles Charlotte for a view that you can literally never get any other way. Running past the Panthers Stadium through Uptown and then up the exit ramp and seeing the runners stream down it is really just the coolest sight. There are a few challenging hills on the loop, being the view of the entire city makes up for that killer one right before you exit and finish up back in Uptown at First Ward Park. The day before there is a huge Expo, especially for it being just a 10K and NODA Brewing makes up a special Jogger Lager beer for the occasion. The race is one of the most sustainable in the country with a try commitment to low impact from reusable cups at water stations, reusable packet bags, shirts made from recyclable materials and paper water bottles. The after party is a great time and the Swag is top notch - I wear my race shirt often, which I can't say for a lot of races. One word of warning, there is a rather strict course time limit due to the nature of the race, they have to reopen the interstate fairly quickly, so the do enforce a 13:45 pace until you exit the 277 loop. There is a bus that will sweep stragglers who do not make the time cut (though I do know from friends that they were a bit looser this year with the time cut). Overall, I love this race and will keep running and recommending it.