Alastair Vance recommends this race
(2021)
"An Experience Like No Other!" 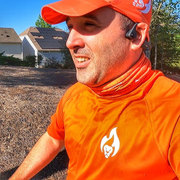 I was excited to try out a brand new running experience, that combined virtual races, with audio clues and puzzles. The theme was fun, and the puzzles were well thought out and challenging.

There are 6 races in total, and to progress you need to unlock the next race with the outcome of the puzzles. I've never done an escape room, but I'm told it's a similar concept except the clues are provided on the run itself.

Fortunately, you are able to replay those clues when you get home as if your memory is anything like mine...

To complete the race sections, you need to use the Runkeeper app on your phone -- this plays the audio clues depending on how far you are into your run. Runkeeper is free in both the Google and Apple app stores.

If you're looking for something a lot more engaging than your usual virtual races, then give this one a look. It would be more fun to get some friends to sign up with you and complete puzzles as a team. I had to use the online hint system a few times, but puzzling with some friends would have been even better. Next time!

Link to this review
Login or sign up to leave a comment.
Alastair Vance recommends this race
(2021)
"Best Race Of My Life!"

The title is no exaggeration. It really was my best race ever. Yes, it was virtual, but I trained just as hard for this as any real race. I came out with two PRs, one for 15K and one for 10K, and I couldn't be happier with that result.

The race jacket, medal, bib and some hot chocolate arrived in the mail about one week before the race day. A few of my friends also had signed up so we were able to run together which made it much more special.

While I really hope we're running this race in Charlotte next year, the virtual experience did not take anything away from the day for me.

Link to this review
Login or sign up to leave a comment.
Alastair Vance recommends this race
(2020)
"10K Virtual Race"

The Savannah Bridge Run was converted to a virtual race late this year. It was inevitable really. It was good for me though, since I wasn't able to travel for this race, but I could run it virtually! So I signed up to run the virtual.

The weather for my run was perfect. I picked a nice out and back route, sprinkled with bridges. My daughter accompanied me on her bike as official race photographer.

I ran my best 10K ever which I'm super pleased about. My route was probably much flatter than the Talmadge bridge, but hey, there's no bridges like that around here.

I submitted my results to the Savannah Bridge Run website that evening and now I'm waiting for my t-shirt and medal to be mailed out.

It was a good virtual race experience for me.

This was my third year running RAD and it is easily the race I look most forward to all year.

I just love the course so much, how it meanders through the trees alongside the Eno river, the elevation gradually increasing as you make your way to the rock quarry. The course definitely gets top marks for scenery.

I ran this year with my buddy Zach and we decided our main priority would be take it easy and enjoy the race. We found a nice conversational pace and did just that.

There are two aid stations on the course, one at approximately 4 miles, and the second at around 8 miles. At mile 5 there was an unofficial aid station, complete with several cans of beer of which we availed. Thank you, to whoever left those out!

Durham celebrates 150 years as a city in 2019, so it was nice to see this emblazoned on the actual race medal, making the hand-made medal even more precious.

The after-party was awesome. Our wives and children joined us afterward for some live music, beer and food. This year the fire pit and s'more-making ingredients was an awesome addition.

I will say that Zach and I did pull off some amazing poses for the course photographers and none of the photos seem to have made the cut. 🤣

Amy Rossi does a great job taking the photos and makes available for free (donation to Life Skills is encouraged).

Well, that wraps up a really good race year for me and I'm glad this race helps me end it with a high note!

Link to this review
Login or sign up to leave a comment.
Alastair Vance recommends this race
(2019)
"They Changed The Course!"

The expo for this race seemed a little empty this year -- the quality seems to degrade each year I've visited it. There was not a lot of vendors there to keep anyone around for long, so it was simply in-and-out to grab t-shirt and bib. I've always liked the shirts for this race, so thankfully they did not disappoint.

I hadn't paid too much attention to the weather until I found an poncho in my race pack. It was only then I realized how bad the race weather could turn out. ;-)

And it rained. It rained hard. When it was time to line up for the half marathon start, it rained even harder. I was wearing the poncho, but removed it just before we started. The road turned into a literal river and my shoes and socks were soaked through before I even started. For the first time while lining up for a race I seriously wished I'd stayed in bed. The media were reporting 400+ people did just that.

The race started and off we went. The rain kept coming down hard for the first 30 minutes or so and then became much lighter. To be honest, after the first mile or so the rain didn't bother me much at all. It's also something completely out of the control of race management.

This was my longest race distance since running a marathon back in March and working through an injury. I've always enjoyed running this race, but this year I did not like the course changes.

It felt like a lot of turnarounds had been introduced, and all within a single neighborhood area. I used to like this race because of the downtown city feel, but this felt more like a training run, running in my local neighborhood and trying to make up a few extra miles before heading home, in the rain.

I still recommend this race to others, because maybe if it was sunny and bright I may not have been annoyed as much with the course.

Usually the after-party is GREAT, but again, it just had a washed out feel this year because of the weather and no-one really wanted to hang around very long. I just grabbed my can of beer and took it home with me.