Finally, after years of wanting to run this race, I got to do the in-person event! I always love a fun-themed race, and this one was fantastic. A friend picked up my packet for me on Friday, so I'm really using her rating of the expo here. She said it was small, but there were plenty of vendors and everyone was enthusiastic about the participants being there.

I had a bit of a parking debacle in the morning, but it all worked out in the end. There were tons more people running than I expected - not a problem - it just added to the fun! The weather was fantastic, nice and cool at the start and only a mild wind, which is always appreciated in Chicago!

The race started and finished in Grant Park and included a short run north on Columbus, then over to Michigan Avenue where we would run south for a few miles before heading over to the Lakefront Trail and then back north again, past Soldier Field, until we made our way back to Grant Park.

Lots of spectators lined Michigan Avenue and the energy was great. I would say the aid stations came about every 1-1/2 miles and at each they had water, Gatorade, chocolate (of course!) and sometimes some other types of treats. I didn't stop at any of the aid stations, but they never did seem too congested. People tended to grab what they needed an move along.

The post-race party was fun, with live music and a nice bowl that included hot chocolate, chocolate syrup, a marshmallow, a banana, Oreo cookies, and a mini Rice Krispy treat. The finishers' medal was awesome - it was the same for both the 5K and the 15K finishers, except for the size, with the 15K finishers receiving a larger medal. Runners also received an great zip-up jacket (the same one for either distance). Volunteers were also great throughout the course.

I would definitely run this race again! It was nice to do it in person this year, as it wound up being a virtual race last year. Highly recommended!

Link to this review
Login or sign up to leave a comment.
Linda Juretschke recommends this race
(2021)
"Dash to the Finish for Some Halloween Fun!" 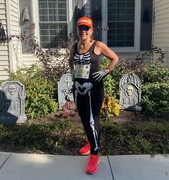 This was a fun event and it would be an ideal family activity. I'm hoping to see more of these virtual options, even once we are back to in-person races without restrictions. They serve as great motivators for walkers and runners alike, and they definitely add to the inclusivity we all seek to promote in the running community.

The swag for this race was great and included a ringer tee (available in women's, men's, and youth sizes, which I sooooo appreciated), a trick-or-treat bag, Halloween-themed temporary tattoos, and a pretty awesome finisher's medal. Our packets arrived a couple of weeks before we did our run. To add to the fun, the whole neighborhood was nicely decorated (I like to think they did it just for us)! We had beautiful weather and we enjoyed seeing everyone's decorations around the neighborhood.

The race is partnered with St. Jude Children’s Research Hospital®, an organization that my family and I have supported for years. This is the main reason I enjoy doing these virtual runs - not only to support the races themselves, but to help support the charities they are involved with.

I would definitely recommend this fun event. Hopefully they will do it again next year!

Link to this review
Login or sign up to leave a comment.
Linda Juretschke recommends this race
(2021)
"A Virtual Race that's Simply Out of this World!" 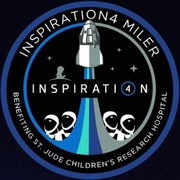 This was a fantastic virtual race experience, and the race swag was out of this world (yeah, I went there)! We received a race bib, a quarter-zip tech shirt, a cap, and a commemorative Inspiration4 Miler Benefiting St. Jude Children’s Research Hospital® medal.

Registration only cost $40, and runners could choose to make an additional donation to support St. Jude, as well as use the race as a fundraiser. The top fundraiser would win a trip for two to the St. Jude launch party for Inspiration4 on Tuesday, September 14th, 2021 (the day before the launch) in Cape Canaveral, Florida, including a private dinner in an open-air hangar, American Airlines vouchers for round trip airfare and a two-night hotel stay at the Hilton Cocoa Beach!

I do realize that running a virtual race isn't for everyone. I have been doing them for years as a way to stay motivated and especially to help support some of the smaller races to which it would be cost-prohibitive for me to travel. The pandemic has helped introduce virtual races to many runners who may have never participated in them before, and I would bet has provided the opportunity for some who for whatever reason might not ever run an in-person race. One of the things I love about the running community is that it is so inclusive. A virtual race such as this is just one more way the running community can be supportive and welcome all to the sport.

Link to this review
Login or sign up to leave a comment.
Linda Juretschke recommends this race
(2021)
"Bear Down, Chicago Bears!"

The PNC Chicago Bears Virtual 5k took place on Saturday, July 31st. I happened to be in Washington, DC that weekend, so that is where I ran my race. Yet another benefit of virtual racing is that you can get your miles in pretty much anywhere on earth!

I loved the swag for this race, which included a super-soft 100% polyester performance shirt (meaning it won't shrink) with the outline of the Chicago skyline and a large bear underneath with the words "RUN LIKE A BEAR ~ IL ~ 2021" 'hidden' within the silhouette of the bear itself. I received a neck gaitor with the Bears logo as well as an awesome medal that is nicely displayed on my "Because Running Isn't Cancelled" medal hanger used specifically for my virtual race medals. I also received a numbered race bib, personalized with my first name, that I proudly wore as I ran my 5K around the U.S. Capitol Reflecting Pool.

I would definitely recommend running this race, and of course as we all do, I am hoping it can be an in-person race next year. I will definitely be there to help support my favorite team’s charity efforts!

Link to this review
Login or sign up to leave a comment.
Linda Juretschke recommends this race
(2020)
"2020 Allstate Chicago Hot Chocolate Virtual 15K: A Delicious Option!"

I originally signed up for the in-person event and was very much looking forward to my first Hot Chocolate race. I chose the 15K distance, which is becoming one of my favorite race distances. The race organizers did a great job of keeping us up to date and enthusiastic about the race, despite the need for it to have gone virtual. Communication was always clear and it often felt like we were leading up to 'the real thing'.

As promised, my race swag and medal arrived about 2 weeks before the official race date. The jacket is so nice - very high quality, and I love the removable zip-off hood. I will definitely be wearing this one for a long time. Lots of sweet treats were included in the goodie bag, and the race medal is just so cool! It has a hidden compartment held shut by a magnet. It took me a while to realize it opened, but when I finally figured it out, I found another sweet treat inside.

I will definitely be signing up for this race next year. Here's hoping we'll all be back to in-person races soon!