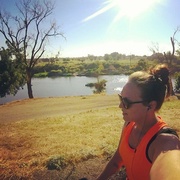 I picked up my bib packet the night before the race. Aside from my bib, the packet contained a cinch bag from Training Zone, the gym that holds the race, a small bag of Pop Corners chips, a small bag of Blue Diamond Nut-Thins, a sample of natural ranch from Hidden Valley, a box of Yorkshire Tea bags, a sample of shave oil, and a coloring book. I only gave 2 stars for T-Shirts/SWAG although this is probably mostly personal preference. First of all, aside from the nut-thins and chips, I will not use the rest of these items. Secondly, there was no t-shirt for this race. I would rather have a t-shirt than a cinch bag, even if it meant spending $5-10 more for my registration.

I gave 3 stars for Parking/Access. If you arrive early enough, parking should be fairly close. I gave a lower rating because this race is advertised as family/stroller friendly but there is a long, steep staircase you have to climb to reach the start line. I was pushing my son in a stroller for this race and had to enlist 2 friends to help me carry the stroller up the stairs. (Then the same back down after the race.)

Before the start of the race, those of us with strollers were instructed to stand in the back of the pack. If I could do it again, I would've ignored these instructions and stood in the middle of the pack like my regular pace. I struggled to get around walkers and slower runners for over half a mile. The road was narrow and only about 3 runners wide. Since I had my stroller, I was unable to run in the grass to pass. However, once I finally got through that part, it was smooth sailing for the rest of the race!

This course is 3.4 miles long so slightly over a true 5k run. Most of it is on levees and you cross a bridge, go down to a water station, turn around, and go back the same way. There were a couple of hills to go up and down the levees but it's mostly flat. The river views are beautiful and serene! I only gave 3 stars because overall, Marysville is just not that scenic aside from the river and there were parts of the course that go under bridges where there is a lot of crude graffiti.

I would still recommend this race because it benefits the YMCA and I like supporting the local community. Hopefully this race will grow with more sponsors in the future and work out the kinks to make it better. Although there were some negatives to this race, overall, I still had a fun run and I enjoyed walking around the Peach Festival after the race. 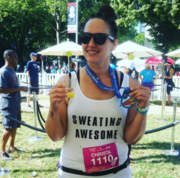 This is the best 5k race that I have attended! There was also a 10k and a Princess 1/2 Mile at this event. Held at the California State Capitol in Sacramento, this year had over 4,000 women, young and old, in attendance!

I gave 5 stars for Race Management because it was definitely the most organized race I've been a part of. Their website clearly explained every detail of the event and had easy registration for the distance of my choice.

The first 500 people to register for the race not only got their bib and t-shirt, but also a free Momentum Jewelry Motivate Wrap! I was unlucky enough to miss this opportunity. The bib was pretty and purple and I was able to customize it with my name. The shirt was pretty to look at but also made of a breathable material as opposed to standard cotton t-shirts I've received at most races. This is a plus for me because I will actually wear it to exercise and it won't just get buried in a pile of race shirts I never wear.

I gave this race 5 stars for parking because I was able to park right across the street from the Capitol. Much to my surprise, the parking was even free! I arrived to the event at 6:15 A.M. when the race starting time was 7:30 A.M. Perhaps getting there that early helped me get my great parking spot.

This was an easy and enjoyable run. It's a completely flat course and it was early in the morning so the weather was nice and cool. This was a relief from the usual NorCal heat of June. We were running in the heart of downtown Sacramento but there were tons of tall and beautiful trees among the city buildings. Plus, you just can't beat the monumental views of the glorious Capitol building!

There was 1 water station along the 5k route which was great. There were lots of volunteers and bystanders on almost every corner along the 3.1 miles cheering us on! Some onlookers even had signs or costumes that made it feel even more fun and encouraging!

After I crossed the finish line, I was handed a gorgeous participation medal by a local firefighter which I thought was really cool! There were volunteers handing out water bottles past the medal station. Once I caught my breath and hydrated a bit, I made my way through all of the sponsor booths. This race was created on the idea of making a great, fun festival event that you want to hang around for first and then adding a race to it. I think that makes this race stand out! I hit the Whole Foods tent for some complimentary yogurt with granola and fresh fruit for some post-race fuel. Then I got to shop at the Fleet Feet Asics tent for some running apparel! There were tons of smaller booths ranging from information on other racing events to health and wellness to healthy foods and snacks. I didn't take advantage of it but there were free health screenings available as well.

My last stop was the much-anticipated Mimosa Garden complete with tables, umbrellas, and a white picket fence. I have to say, a delicious free mimosa is a pretty spectacular reward for a race hard-run! I was only disappointed that I couldn't have another!

Overall, this was a really fun event that I will make sure to attend every year! It was beautiful to see women coming together to celebrate health, fitness, and female empowerment! I 100% recommend this race to all women interested!

Link to this review
Login or sign up to leave a comment.
Christa recommends this race
(2017)
"Run Around the Rice...and Then Win Some!"

The Run Around the Rice 5k is a great local race benefiting a local elementary school. It was a fairly small race but fun nonetheless!

This event is held out in the rice paddies which make for a really unique and pretty view. The downside to being out in this farmland is that you have to drive and park on the side of a gravel road and step into tall grass when you get out of your car. It wasn't a huge deal but it's not preferable.

The course is completely flat so elevation is no issue. It is, however, all gravel, grass, or dirt trails so watch your step. That being said, I didn't have any problems. It was a great course, I loved the rice paddies, and it was nice going in a loop instead of out and back. That is a huge plus to me!

There was 1 water station on the 5k course and several stations of people with signs cheering us on. I always love getting that support! For this race, I had the option of a t-shirt or a tank top which I LOVED. I got the tank top and I wear it for my workouts all the time.

Something quirky and unique about this race were the prizes. I placed in my age group and instead of a medal, I got a gift bag of fresh local olive oil and...rice! What else? I thought it was funny and really neat. Not to mention my family and I enjoyed eating it later!

Overall, this was a fun race with some unique traits and I would definitely run it again!

Link to this review
Login or sign up to leave a comment.
Christa recommends this race
(2017)
"A Small Glimpse of the Beautiful Sutter Buttes Mountains!"

This race was held in the world's smallest mountain range, the Sutter Buttes! These mountains are usually just the backdrop I see on my drives around town so I was excited to see them up close.

The evening before the race, I went to New Earth Market in Yuba City, CA to pick up my bib packet. The pickup table was crowded in a good way. There was a buzz of excitement that got me even more pumped about this event. The staff handing out the packets and shirts were enthusiastic and friendly. I was given a large, high quality reusable bag filled with my bib, shirt, and swag consisting of some gels, snacks, lotion samples, and coupons. I had never received a swag bag for a 5k so I was pleasantly surprised to get one!

On race day, I made the drive to Sutter, CA. The directions were very easy to follow and there was plenty of free street parking all around near the event.

The course for the 5k was obviously short. At the 1.5 mile turnaround point, there was a water station with 5 or 6 people cheering us on and a photographer. I was hoping to see more of the mountains but I should've known the 5k would be too short for that. It was still very beautiful with green rolling hills and the mountains in the distance. There was a very slight climb uphill for a short portion of the race. It barely felt like going uphill at all.

Overall, I really enjoyed this race! I think I'll be training for the half marathon next year so I can fully see the Sutter Buttes in all their glory!