Expo.... really more of a packet pick up. it was held at a running store, and they have racers 20% off. We got a tee, bib, rubber bracelet, a bunch of Charlotte Hornet swag, and a sling bag.
Parking was at a nearby high school with busses running to the park. it was super speedy, I didn't wait in either direction, although the line to catch the bus was long when I was dropped off at the end. There was a Spartan Kids thing going on all day and the people waiting were definitely future Spartans.
The race had plenty of potties, no line, sweet smelling. The race started on time, after the anthem and a speech by Jimmie Johnson.
The course started and ended on dirt road but most of it was single track trail paths with roots and rocks and hills. everything a trail race should be.
It was super well marked and the water stations and most turns were manned by awesome and enthusiastic volunteers.
It was one of the most enjoyable races I've been to in awhile. I'll definitely be going back.
AG prizes were Jimmie Johnson caps and cool wraps.

Link to this review
Login or sign up to leave a comment.
Kim Prytherch recommends this race
(2017)
"Beautiful Course with Beautiful People "

My daughter and I signed up for Zooma Annapolis as a mother daughter race weekend. she was signed up for the 10k and I was signed up for the half. the weather was super hot and humid though so I bumped down to the 10k.
The expo was small but they had wine tasting and a booth that sold race essentials, which was ok with me! It was in the host hotel which we stayed at. The race started about a mile away, an easy walk, if you didn't want to move your car.
The start had music and they let you know when to line up, etc. No confusion, and the race started on time.
The course was beautiful. It ran past the docks, and all around Annapolis. They had Navy cheer stations and Lots of spectators with signs.
There were 3 distances that day, 5k, 10k, and half marathon, and the signs directing the Runners were spot on. Again, no confusion, and the volunteers made it even easier if that's possible.
We finished at the stadium and there was plenty of food and drinks for everyone. The medal was really pretty and we had an amazing time.
I want to go back in 2018 for the half! it's calling my name!

Link to this review
Login or sign up to leave a comment.
Kim Prytherch recommends this race
(2017)
"Scenic Ocean Front Half Marathon " 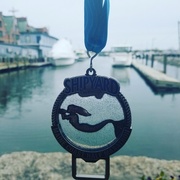 I ran this race as a BibRave Pro.
The expo was easy to find, at the University of New England, which was also the start and finish. They had a large booth that sold race essentials, a medal rack booth, and a few other small booths.
We got our bibs easily, and there were free race specific car stickers with the distances on them which was nice.
Now I don't know how I missed this when I registered but you don't get a shirt with your registration, it was $12 extra. They only had a few extras for purchase, all S or XXL, of which I am neither, so no shirt for me.
Race morning we had no problem parking, and there were tons of potties with almost no wait. They started on time and each wave went off with the sound of a conch which was so cool.

The course was open to traffic and on more than one occasion I was afraid for my life. It was insane. Only small parts were blocked off with cones for us and there was little to no shoulder on the other roads. Cars were speeding by and honking angrily at us.
The course was gorgeous. The first 2 miles were between the college and the ocean, and then we got to run along it for a bit, then into some neighborhoods with Beautiful houses and marshes. Back to the ocean again, with some amazing views. I stopped alot to take pics, I'm not gonna lie. Miles 6 through 11 were pretty much all along the ocean with some twists and turns and plenty of hills, pretty much throughout the whole course, which cracked me up because someone said before the race that it was mostly flat. It's not. The last two miles brought you back to the finish.
Course support was spot on, one station even had a Survivor theme, and they announced your name when you crossed the finish. The medal is gorgeous.
Food choices were mini bagels, slightly stale, watermelon, bananas, oreos, and yogurt. Water was given to us in reusable race bottles and they had tanks to refill them near the food tent. They had beer at the beer garden as well.
If I didn't live so far away I might consider this race again.

Link to this review
Login or sign up to leave a comment.
Kim Prytherch recommends this race
(2017)
"Great 8k for a PR!"

I registered for this race as a team member so I don't know anything about packet pick up, my team captain picked them all up for us.
I switched from the 5k to the 8k the week of the race with no problem, the RD was super helpful and polite.
Parking on race morning was easy and plentiful and they had a lot of businesses with tables set up. Music was playing and they had very organized team areas so you could meet up for a group photo. The bag came with your bib and tee, plus lots of locals coupons and an ice pack, the kind with the little beads inside.
The race started on time after a prayer and the anthem. I love living in the south!
The course was like a maze, but a very organized maze. We started before the 5k, which started about 15 minutes after. We shared the course, but the 8k did an extra loop. Volunteers were very good at keeping everyone going the right way. There was water at mile 2 and 4, and the cups were super full which was nice.
At the finish you were given your bling, then you passed tables full of bagels, granola bars, cheese crackers, and finally water. The water should have been first, but that's my only minor complaint. There was also Gatorade and plenty to be had!
There was a little chaos with the awards, but our team won largest team and fastest team!
It was a fun race, definitely one to do again, especially since I scored a 5 minute PR!

Login or sign up to leave a comment.
Kim Prytherch recommends this race
(2017)
"Crazy Hilly Half Marathon "

Expo: packet pickup was at Dicks Sporting Goods. There was no signage until you got upstairs, and then they had signs with arrows. Tech shirt was nice and bibs were bright. No extra swag to speak of.
Parking was plentiful since it started and ended at a mall.
There were porta potties at the start and the line moved quickly. Not many on course though, although I never needed one.
The start was very organized with 10k runners and Half runners starting separately.
Both distances ran together for 3 miles and then we separated. signage was great, everyone knew right where to go!
The course was very hilly! At around mile 9, we left the road to run through some paved trail roads and gravel. This just about killed me and the last 3 miles were rough. Police and aid stations were on point throughout and I never felt unsafe or thirsty!
The finish was well marked. I finished just under the time limit and was given a medal plus one extra for my running buddy. There was water at the finish and oranges but no other food and the beer was all gone as well. I don't remember a band either, but this is common at Charlotte races, they tend to pack up early.
I really enjoyed the race, overall it was well run, and I would run it again, if only to conquer those crazy hills!