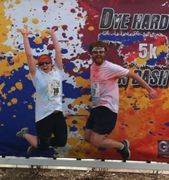 The Dye Hard Fan Dash is a locally organized color run in Tulsa, OK with a fun twist. It's a family friendly event that encourages runners to come out and support their favorite Oklahoma college football team, whether it be the University of Oklahoma - Boomer Sooner! Oklahoma State University - Go Pokes! or the University of Tulsa - Go Cane! Or you can be totally neutral and just have a good time in the race.

The race started and ended at Guthrie Green, a new urban garden and performance park in the Brady Arts District of downtown Tulsa.

The race had a costume contest, a chili cook-off, music, tailgating, beer, and lots of color flying in the air. This was the first year for the race but it still had a pretty good turnout.

According to the race directors, next year the race will be held in August and at night for a fun and festive party environment to kick-off football season!

Link to this review
Login or sign up to leave a comment.
Sarah recommends this race
(2013)
"Route 66 Half Marathon Recap"

The Medals - The medals are literally award winning. They have a few different types such as a "My First Marathon" Medal, a Medal for Half Fanatics, Marathon Maniacs, and a medal for 50 States runners.

The Detour - This race is called the "Shortest Ultra" because runners have the choice to run an extra .3 miles and take the Center of the Universe Detour. If you do, you end up running 26.5 miles and you get an extra coin to commemorate the experience.

The Course - they changed the course this year and it was still a great course that ended at Guthrie Green in downtown Tulsa. A little hilly, probably more so than most were expecting.

The Swag - Everyone gets a participant shirt, but you have to purchase your own finisher's shirt. Not a big deal to me.

Maniac Corner - If you are a Marathon Maniac, Half Fanatic, or 50 State runner they have a special VIP area for you to hang out after the race, drink beer, get warm, and refuel. Love it!

Expo - The expo is good. Not the largest I've seen but not the smallest either. Other races show up and some of the big gear names like Garmin show up.

Support - The race support is like none other! Even though this year was literally freezing, the water stops and aid stations were amazing and the crowd support was great!

Race Ap - They have an ap for iPhone and Android users so your loved ones can track you as you cross certain checkpoints on the course. Pretty cool for those who can't go with you to the race.

Mascot Dash - After the 5k on Saturday they hold a short race for local sports and business mascots called the Mascot Dash. It's pretty fun to watch and gives the race a little extra special feeling.

Link to this review
Login or sign up to leave a comment.
Sarah recommends this race
(2013)
"Nike Women's Marathon San Francisco " 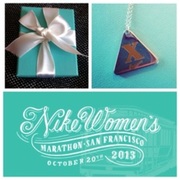 The NWM in San Fran is huge! There were over 30,000 runners in the Half and Full race distances. This race was on my bucket list and the perfect race for a girl's weekend. This race is good if you want a huge group, a lot of fun, lots of girls, and high energy. It's not the race for you if you are looking for a PR in the half or full though.
The Necklace - Instead of a typical finisher's medal each finisher of the Half and Full get's a Tiffany's Necklace! Complete with a fireman handing it to you after you cross the finish line.
The Course - The race is in San Fran so of course it was hilly and hard.
The Swag - the race is a little pricey and you have to buy your own shirts (participant and finisher) but the necklace and experience are totally worth it!
Photos - The Expo and Nike-town both have several perfect photo opportunities as well as the race! Don't forget the hot firemen waiting for you at the finish line!
The Expo - The Expo is small and only has Nike products, which makes sense but don't expect a huge Expo.
Transportation - The race starts downtown and ends at the beach so you have to have a ride or take the shuttle back to downtown to your car or hotel room. Easy to use, just don't forget to buy your shuttle pass.