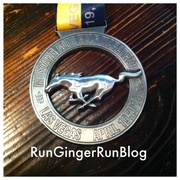 This was a one time only race but it was great! If you ever get a chance to do a race in Las Vegas I highly recommend it!

Overall the race was very well organized and worth every penny to travel to Las Vegas.

The medal is the best part! It's a nice size, a little bigger than my palm, and even though it represents a brand, Ford Mustang, it doesn't just scream ADVERTISING! like some medals I've seen.

The Expo was non-existent and was really more of a packet pick up set up.

The shirt is great! It's a nice tech shirt and it came in men's and women's sizes so the fit is better than races that use unisex shirts.

The race was hot but they had plenty of aid stations to make up for the heat. We had water/Gatorade at almost every two miles. The race was closely watching the weather and did a great job of communicating when the race went from a normal Green flag to a Yellow caution flag.

The Elevation difficulty wasn't bad at all. It was mostly flat with a few slow inclines and only one hill which wasn't a big one. But there was on spot where we were running on gravel for a short while.

Parking was fine. The race was held at the LV Motor Speedway which is use to facilitating parking for a few thousand people at a time. We rode the shuttle and made it even easier. We had a 10 minute walk from the parking lot to the starting line.

The race management did a great job of putting on a well organized and safe race. The course map is a little confusion just to look at but everything was clearly marked on the course. Also the bib had a QR code on the top and we were able to view our race results instantly by using our smart phone to read the code!

The course scenery was hit and miss. It was great when we had a nice view of the mountains and it was fun to run on the Las Vegas Motor speedway, but it was a little boring at time being around nothing but the desert.

Overall I am really glad I did this race. The medal alone was worth it!

Link to this review
Login or sign up to leave a comment.
Sarah recommends this race
(2014)
"The Goo Run Tulsa 5K" 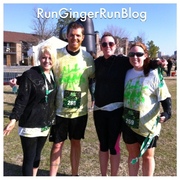 The Goo Run is a fun 5K. It is similar to a Color Run only they cover you with green slime as you run through the course. This is not a race to do for time, but to do to have a good time with your friends or even your kids. The Goo is a slime like texture that isn't harmful, but sure is messy.
This event travels around different parts of the US so check out their website to see if one is coming to your city soon.
For registering for the 5K you get a cotton t-shirt, (white or black), a bib, a discount on race photos and a finisher "medal". The medal is made of plastic and has green goo in the middle which is kinda cool. The race is a bit pricey so sign up early or look out for their discount codes on their Facebook page.
This is definitely a race to do with a big group of people to make it more fun.
Look up where you can park before you go because on one side of the street, parking was $10 and on the other side of the street parking was free!
There are 5 or 6 stations where they shoot you with Goo and even a Goo waterfall that you run under at the start and end of the race.
There was only one water stop but we went by it twice.
The course was flat but since this is a family fun event, there were a lot of walkers to avoid if you are trying to PR.
The bibs are neat.
Overall this was a fun race to do with friends and to get very messy!
Here are a few tips to help you have the most fun!

Wear a "clean" layer of clothing. And by that I mean, were a pair of shorts and a tank top as a base layer that won't get exposed to the Goo. There weren't any changing areas or showers so we had to strip down as much as possible in the parking lot before we got into the car. Bring plenty of towels.

Wipe the Goo off as soon as possible. The stuff is made out of a jelly silicon like substance and when it dries on your skin it cracks and kinda hurts.

Don't wear your good running shoes/clothes. We had to wash our clothes twice and our running shoes three times. Luckily everything did come out clean.

Wear a hat! It's almost impossible to get Goo out of long hair. So you may want to cover it up.

Wear sunglasses. They Goo volunteers found it to be a personal challenge that if you covered your face while running through a Goo station, that is exactly where they wanted to hit you with Goo. So wear some sunglasses to protect your eyes.

Link to this review
Login or sign up to leave a comment.
Sarah recommends this race
(2014)
"Sweetheart Run 10K"

The Sweetheart Run is a fun Valentine's themed race to do with a Sweetheart or a buddy here in Tulsa. You can register as an individual or as a team with your sweetheart.
The race starts and ends in downtown Tulsa in front of the Fleet Feet store. The 10K course is mostly flat with one hill as you come back into downtown Tulsa from riverside. The course is an out-and-back run towards the BOK Center then down to riverside for a few miles and back to the finish line.
There is a couples costume contest and a pancake breakfast (with beer if you are over 21) afterwards! The bibs are actually cute as well and each person gets a long sleeve T-shirt with their race registration.
This event also has a 5K option. If you want to do both the 5K and the 10K, you can sign up to do the "Double" being as the 5K starts 45 minutes before the 10K.

Link to this review
Login or sign up to leave a comment.
Sarah recommends this race
(2014)
"TATUR's Polar Bear Plunge Tulsa"

This race is unlike any I've ever participated in and takes place on New Years Day on the West Side of Tulsa.
Here's how it works:
3 Pools. 2 Miles. 1 Medal.
They have 2 heats. (Heat may be the wrong word for this being as we were jumping into ice cold water) They have a 1:00pm and 1:30pm start time. You know, so you don't have to get up too early if you are hung over from New Years Eve.

The race is a total of 2 miles. You run the first 1.25 miles on a mostly concrete trail on the west side of Tulsa. Then you jump in a series of 3 pools (yes you have to jump into cold water more than once!) and on the third and final pool you have to retrieve your giant medal from the bottom! (How twisted is that!?!) Plus, floating in the third pool are all kinds of frosty adult beverages you can pick up and take with you to the finish line where the bond fires are waiting to warm you up.

The first mile feels like the longest mile ever. It could just be the adrenaline from knowing you have to jump into 3 ice cold pools though.
Parking is easy because it is on the River Parks trail. You pick up your race bib and shirt the day of the event. This year there were about 600 runners and the temps were in the low 40s.
They even have an add-on event, the ice bath, and for an extra $5 you have to submerge yourself in an ice bath but you earn an extra pin and bragging rights.
The medals are seriously huge coming in at 6.5 inches! The cost of the race isn't bad considering it was $40, you get a medal, T-shirt, and an after race party with pizza and beer. I noticed this year that they ran a deal on living social so for those who were able to take advantage of that it was even cheaper.
Oh and before the race they gave out free shots of Rumplemints to those who were old enough to drink! There is also has a fun costume contest before the race that gives out cash prizes.
It's a cold and crazy time, but I highly recommend it to anyone who is brave enough!

This race is entirely on the Riverside (paved) trail system of Tulsa. The race has 4 distance options. 5K or 10K to Go Short. 25K to Go Long. And a 50K to Go Very Long!
The 5K and 10K runners do a out-and-back on the east side of the river. The course is 100% flat and on a paved road so if you are looking for a 5K or 10K PR, this is the race for you!
The 25K runners do one long loop around the Riverside trail system. It is also very flat with one hill at Turkey Mountain. It's not a terrible hill, but definitely a hill after all the miles of flat road.
The 50K runners will do the same loop as the 25K, but they will do it twice.
Parking at this race is in the neighborhood around the start of the race which is located at Blue Rose Cafe, right on the river. There is no expo because the race is put on by a local running store, Fleet Feet.The swag includes a long sleeve tech shirt with the race logo. Love it!
There are nice aid stations around the way, but there could be another bathroom or two for the longer distances. Since this is a smaller local race, there isn't a lot of crowd support. So you just have to bring your own!
The medals are a cute Dr. Seuss theme! This year the 5K and 10K runners got a medal as well, although it was smaller than the 25K and 50K which is how it should be.
If you are looking for an Ultra, I would highly recommend this one. The weather has been nice and the course is very very flat.