The Hot Chocolate Nashville Race was virtual this year, but that doesn’t mean it was any less fun!

The SWAG
The Hot Chocolate 15k medal is pretty sweet! (Pun intended!) The medal opens up to reveal a bar of chocolate!!!! Other swag included some gels, a waffle, hot chocolate, chocolate, and an awesome jacket that fits so nicely! This was a fun race and has nice swag. I would like to run this one in person some time!

Link to this review
Login or sign up to leave a comment.
Katie St Pierre recommends this race
(2021)
"Virtual Race in the cold!" 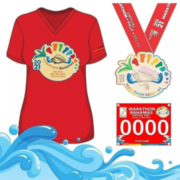 You know, I was supposed to visit the Nassau and Freeport on a Bahamian cruise during the spring of 2020 – just two weeks before IT happened – the SHUTDOWN.. I was super bummed. I had been planning the trip for about a year and was SO CLOSE to going. Alas, here we are almost a year later, and we are still stuck at home. No cruise. No in-person run.

I signed up for this race to help cheer me up a little and, even though it was in January, was hoping for some “warm” weather. Ha! The day I ran was a windy, cold, wear multiple layers type of day. But at least I had my warm Turtle Glove mittens!

BUT – my best running buddy agreed to go run around Great Falls Park in Maryland – a beautiful towpath with gorgeous views of water and waterfalls. AND it was relatively sunny – AND I felt good while running, so I must say that my Bahamas Half Marathon went pretty well!!!!

As you can see from my pictures, the view certainly does not disappoint.

On our return part of the out-and-back run, we decided to get a little adventurous and scramble up some rocks. Getting up was much easier than getting down!

The park was crowded while we were running, with hundreds of people with binoculars and cameras – apparently there was a really rare-for-this-location bird that everyone was trying to get a glimpse of. The sighting even made the national news!

I was really impressed, with how crowded the park was, how many people actually were wearing their masks properly while we were running by!

Our final running time was 3:13:29, not fast by any means, but we weren’t really trained for the distance, it was cold, and we had a lot of fun goofing around!

My swag has not shown up yet, but it is pretty cool stuff!

All in all, this was a a cool race, and even though it wasn’t live, in-person in the Bahamas – I still had a lot of fun! And that medal is FIRE!

Link to this review
Login or sign up to leave a comment.
Katie St Pierre recommends this race
(2020)
"Quality swag though careful of the size you choose"

Hi I’m Katie the Elf, what’s your favorite color? Mine is orange!

When I saw an ad for the Elf Virtual Run on Facebook, I knew it would be such a fun virtual run. I was planning to sign up for it anyway, but was then offered in entry as part of being a BibRave Pro. Score! Any chance to parade around town dressed like an elf with your best running buddy is going to be a grand time.

My friend and I went out a few days after Christmas to complete our Elf Run and we didn’t even care we may have looked silly! We certainly got quite a few honks and smiles as we spread Christmas cheer during our six mile gallivant around town!

The Elf Run SWAG included a beautiful and thick “jacket”, though I might call it more if a sweatshirt. This is a high quality piece of clothing, but unfortunately it does not really fit me! I’m pretty sure I followed the sizing guide, but it is too small. I can squeeze into it to zip it up, but it is not flattering and I can’t pull it down my hips. Next time I need to remember that sizing up is always better!

The beanie is cute and soft and great to wear during these blustery days that we seem to be having so many of. The medal is lost in the mail somewhere between Indianapolis and my house and will show up when it shows up. I will proudly display it in my medal rack when it arrives.

Toni and I weren’t really going for time, as we were still stuffed from Christmas cakes, cookies, sweets, and treat. We walked our six miles, complete with some large hills around mile 5.

Link to this review
Login or sign up to leave a comment.
Katie St Pierre recommends this race
(2020)
"Super cute shirt!" 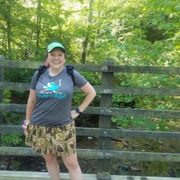 Lincoln Park Run for the Zoo

The Lincoln Park Zoo is Chicago’s free zoo and its yearly Run for the Zoo turned into an exciting virtual race for this year! They have some CUTE animals at the zoo, and I wanted to support them. I mean, c'mon....

My Virtual Run for the Zoo

I signed up for the 10k distance and dressed up in my animal skirt and the most ADORABLE race shirt. Look at that ostrich! The shirt is super soft and was true-to-size.

I didn't have anywhere with animals to run, so I headed out to Prince William Forest Park (Virginia) for a trail run. Lots of hills in nature - it was beautiful scenery, albeit a bit muggy.

My friend Toni joined me on the race and she was very jealous of my shirt. She told me that her son lives in Chicago and loves to visit the Lincoln Park Zoo.

There was a little stream that we crossed over via a bridge...

And look! An animal! Not a bear or penguin or any exciting animal that you can see at the Lincoln Park Zoo, but a real live WILD squirrel!!!!

We also saw this cool bird that posed for me while I took a picture.

And of course, my post-race hydration and refreshment included a Strawberry Acai Refresher from Starbucks.

It' a bummer that this race turned into a virtual, but I'm glad we still got to support the zoo. The "real life" race looks like a lot of fun!

Link to this review
Login or sign up to leave a comment.
Katie St Pierre recommends this race
(2020)
"Hills made me feel like a real Wonder Woman!"

On October 21, 2020, I met up with my best running bud, Toni, and we set out on a circle loop in a new-to-me running area. We began our run at one of the pubic libraries and headed towards a fancy schmancy neighborhood that I did not know existed. Seriously, this neighborhood was nice! It had a running path instead of sidewalks, beautiful tree lined streets with leaves starting to turn a bright and festive color, and huge houses that actually have space in between them!

We started our run pretty late – 6:00pm – and we knew it would get a bit dark as we were running. Luckily, I brought my handy dandy headlamp to light our way as we ran.

The moon and stars starting to come out and it was making for a great run! The weather was perfect, the view was beautiful, and the company was great 🙂

Of course, we needed a leaf shoe-fie!

We certainly felt like a Wonder Woman after our run – there were some nasty hills to climb in the last mile or so! I didn’t look at the elevation gain before planning my loop – oops! A surprise – we WERE Wonder Women! Our time was 1:19:18 – pretty fast for the hills!

This was a fun race and came with some really quality swag – an impressive medal, a long sleeve pullover, a tote bag, and wrist cuffs! I would definitely run another race with this race company!