In order to safely hold the event in-person this year, the race organizers had to do things a little differently. Instead of everyone racing on the same day, they spread the half marathon across four days (Thursday, April 22 – Sunday, April 25) and the marathon was held on Saturday, April 24. Runners signed up to start at a specific time. While I don’t remember the timeframe, I think it was something like 7 – 11:30am. There were waves every 15 minutes and a maximum of 50 runners per wave.

When I had to pick, I had no idea if I would be vaccinated by race day (spoiler alert – I was!), so I purposely picked Thursday at 8:45am hoping it would be the least crowded.

Packet pickup was a drive-thru event spread across three days. Because I went on the first day and the only weekend day for packet pickup I thought it might be crowded, but there was no wait at all! Volunteers directed every car to one of the tents, and after verifying our identities, we were given our bags.

One thing that wasn’t well advertised – and about the only complaint I have about this year’s race – was that parking in the Lynn Family Stadium lot was $10.

Our corral wasn’t crowded at all – maybe 15 people total. The marshal explained that we needed to keep our masks on but as soon as we crossed the start line, we could take them off. He apologized that there was no horn or fanfare, and that he would simply yell, “Go!” when it was time. And then it was time!

The course this year was different since the race was spread over four days. This year, after leaving the stadium, we ran across the Big Four Bridge and made our way to the Greenway, which runs along the Ohio River. I wasn’t especially excited about the course, but one good thing about an out and back is that you pass other runners – which means you can cheer each other on. And I did just that! Nearly every runner I passed, I told them, “Great job!” or “Way to go!” Seriously – that was the best part of the race.

Overall, I thought the race was incredibly well run and organized. I’m glad I ran on Thursday because it wasn’t crowded at all. Other than the charge for parking, my only other complaint is that I’m not a fan of the shirt. The design shows the four bridges in downtown Louisville, and it’s forest green. I love green, but what do you wear with forest green? Regardless, I’ll definitely run this again.

Link to this review
Login or sign up to leave a comment.
SHERRY BOESCH recommends this race
(2021)
"Awesome swag!" 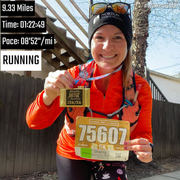 This was my first time running the Allstate Hot Chocolate 15k. In Louisville, it's the final race in a three-race series, and the 15k was a perfect fit in my half marathon training plan.

One thing that impressed me right away was that the swag arrived early - and there's a lot! You get a super nice jacket (with a removable hood), a cool medal (unlike any other medal I have), a couple pieces of dark chocolate, two packets of hot chocolate mix, and some Nuun. Everything was very on brand!

Submitting my time was also super easy. As I mentioned above, this is part of a three-race series and you have to submit all three times at the same time, but the process was flawless. I'll definitely run this race again - hopefully in person!

Link to this review
Login or sign up to leave a comment.
SHERRY BOESCH recommends this race
(2021)
"Loved participating virtually!"

I didn't have the gorgeous scenery of the Blue Ridge Mountains for my virtual 10k, but I decided to run my race in Iroquois Park, which has several rolling hills. Participants in the virtual race could run theirs anytime April 1-30, but I ran mine the same day as the in-person race. The race directors sent out a helpful email a couple weeks prior with lots of great information. The communication detailed how to upload virtual results and notified us that swag would be mailed out after April 30. I can't review the swag yet, but was definitely impressed with how communicative the management was.

Link to this review
Login or sign up to leave a comment.
SHERRY BOESCH recommends this race
(2021)
"Challenging course, cool medal"

The Waverly Park Trail Bash has two distances - a half or a quarter marathon. It's also the second race in DC Timing's three-race Trail Bash series. While they offered both in person and virtual options, I opted to do virtual because I'm not quite ready for an in person race.

My friend Melissa and I completed the quarter marathon at Waverly Park a couple of weeks before the race. It had snowed, but the trail was easy to see and it made the woods so pretty! The trail was in decent condition and the elevation made it challenging enough to keep it interesting.

The medal is super cool. This year for the race series, DC Timing picked a really pretty medal design, and the idea is that the three medal will connect together to form one big medal. While the medal it awesome, the shirt quality and design isn't on par with previous DC Timing race shirts. They used to be known for super soft shirts and cool designs, but the shirts this year aren't soft and the font reminds me of an early 2000s screen saver.

Login or sign up to leave a comment.
SHERRY BOESCH recommends this race
(2021)
"At least the medal is cool"

This is the third and last trail race in a series and I chose to do it virtually. Unfortunately, due to the date I had to submit my time and the unlucky weather streak we had, I had to run it in five inches of snow. Not fun, but it definitely challenged me. Yesterday, we received our swag – a hat and medal. The hat is…interesting. It seems they kept with the 90s clip art theme they used for the t-shirts in the other two races in the series. I’ll likely the donate the hat. I’m not impressed at all. The medal is a different story. It’s the whole reason I decided to do the virtual series in the first place. It magnetically connects to the medals from the Harrod’s Creek and Waverly Park races, and it’s so pretty! I’m usually not the person who races for the medals, but this one is an exception. Will I do this race series again? Likely, especially when life is back to normal and I feel comfortable participating in a live race. DC Timing knows how to put on fun races, and there’s usually donuts and coffee at the end. I do hope they’ll rethink their swag and revisit the t-shirts from a couple of years ago. They were incredible soft, colorful, and had great graphics.