The Statesman Cap10K is an iconic Austin, TX race! I’m still fairly new to Texas and whenever I spoke to other runners, they told me “you HAVE to run the Cap10k!” Unfortunately, due to unforeseen circumstances for the past 2 years, the race has been cancelled. This year, due to COVID-19, the race went virtual. The run could be completed between April 11th and April 30th, 2021. Below are my thoughts and experiences of this race:

Packet Pick-up:
-My race packet was mailed to me, but the race did offer a drive-through packet pick-up for those local to Austin.
-I unfortunately received the packet after the date I originally wanted to run the race, so I postponed the date of my race.

Race Swag:
-I thought the race swag was great and really well thought out compared to other virtual runs I’ve completed.
-The bag came with a t-shirt that fit really well and was better quality in my opinion than many race shirts, my bib, my finisher’s medal, a yellow tape to make a finish line and a piece of chalk to either mark your course or write some words of encouragement.

Course:
-I ran the 6.2 solo miles on Austin trails
-The Cap10k did provide 10 options of in-person running routes in the Austin area. However, many of them went through neighborhoods with streets to cross and I didn’t want to worry about those safety issues while trying to run fast.

Conclusion:
-I believe this is the best overall virtual race experience I’ve had, other than the slight delay in shipping of the race swag.
-I believe the Cap10k team put a lot of effort in planning this to be a positive virtual experience, especially if you live local to the Austin area.
-I will definitely run the Cap10k again! Hopefully, 2022 will be in-person!

Link to this review
Login or sign up to leave a comment.
(2019)
"Run the Alamo 26.2 Needs to be RUN more Efficiently" 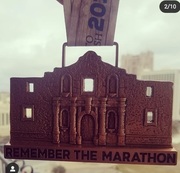 I picked this Marathon based on their marketing of the scenic route, epic finisher's medals, and amazing post-race party. Here was my experience in 2019:

Packet Pick-up/Expo:
-The packet pickup and expo was held in a small size building in La Villita, near the convention center in San Antonio.
- I had to wait over 1.5 hours to pick up my packet.
- My t-shirt size was wrong ( it was not what I ordered) and when I asked if it could be exchanged, the staff person said "no", because they had already let other people switch.

Race Swag:
-This Marathon is really about the MEDAL! It’s huge!
- The t-shirt was also amazing.

Course:
-The course has many beautiful parts- past the historic missions, the River Walk, The San Antonio River and through a lot of neighborhoods.
- The distance markers seemed to fade away at the end of the marathon and the direction signs weren't helpful the last 5-6 miles of the race.

Course Support:
-In my opinion, course support was a total failure for those running the marathon. The race management knows how to successfully run a 13.1 event, but was ill-prepared for a marathon.
After the half marathon turn off, the hydration stations were sparse. Several tables were empty with no volunteers or water left. Water at one stop was warm- almost hot. At another station, the water tasted so bad, I had to spit it out. The one volunteer at that table apologized and said a lot of people were spitting it out. There were no electrolyte drinks that I saw.The best run support was a table of snacks provided by a local Running Group- not the race management.
- Lack of medical staff. At Mile 17, I blew something in my knee. If there had been a medic anywhere nearby, I would have DNF the race and quit. I was in so much pain. However, I never came across anyone and at the next waterstop they told me it would take at least an hour to get me help, so I walked/ran the rest of the marathon.

End of Race:
-The race had really hyped the awesome “after party”. Well, not for people who finished the marathon after 4 hours. The food and chocolate milk was WIPED out. The staff half-heartedly showed us that they had a few cold baked potatoes left.
-The staff said the 5k, 10k, and half marathon participants got to the snacks first! This felt insulting to those of us taking on 26.2 that snacks weren’t put aside.
-It was hard to find the finisher’s jackets and once again, I couldn’t get the size I ordered because other people who got there first took the XS even though that’s what I had ordered.

Conclusion:
-I would consider running this marathon again, ONLY with assurances that race hydration and staffing had changed. Overall, I did not find the staff management helpful or understanding. Running a marathon is hard enough and I count on a basic level of support.

Link to this review
Login or sign up to leave a comment.
Liv T recommends this race
(2019)
"The "PR MAKER"" 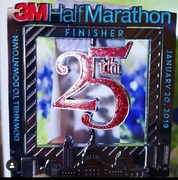 I chose this race in 2019 as a training run for a Marathon I was running in the Spring. I was not disappointed!

Packet Pick-up/Expo:
-The packet pickup and expo was held in the Austin Convention Center. I found it to be very well-organized and easy to navigate.
-There were a lot of vendors in the EXPO from fitness companies to athletic wear to nutrition products. Most of them were interesting, but I don’t enjoy the timeshare companies that are becoming staples at these expos.

Race Swag:
-Because the race is sponsored by 3M, the swag bag was filled with practical items like Post-it Notes and Tape .It’s my favorite race bag to date!
- The 2019 T-shirt was not my style, but seemed like a quality shirt and they did actually have XS!

Course:
-This Race is often known as the “Downhill to Downtown” Race and the “PR Maker”.
- The course is net-downhill, but be aware that there are certainly hills as part of this course.
- The course “feels” fast paced.

End of Race:
-The Medal was great! It was the 25th anniversary of the race.
-Food was portioned out in a little bag to grab and go- which I enjoyed.
- There was a lot of postive energy at the finish line!

Conclusion:
-I would definitely run this race again and recommend it to others.
-It was a relief to run such a well-organized event!
-And I did make my half-marathon PR at this race! 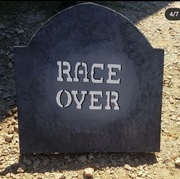 What could be better than running a race through a Ghost Town? That's what I thought when I signed up for the 5K event as part of the 2018 Austin Haunted Half. Instead, it was a morning filled with confusion and chaos- not what any runner wants to experience before their race.

The Course:
- Was pretty unremarkable. Up a paved road with a turn-around back.
- At the very end, the course goes through a haunted house, but people in costumes jumped out at me, which I thought was very unsafe in the dark.
- No water station on the 5k

PROS:
-The venue was adorable and perfect for photo shoots!
-The medal and T-shirt were well-designed and Fun!

CONS:
- The race began with many of the participants still trying to find parking
- There was limited parking- even for people like me who paid EXTRA for VIP tickets, could not find a parking space. I was told by staff that "they sold too many VIP spaces".
-Staff management started to avoid answering questions at the "help" desk.
- The race medals were 2 different sizes- the half marathon size was larger. The staff just started passing these out to 5k finishers who asked for them.
- Race results were not posted for more than 24 hours
- Race pictures were not posted for weeks!