First Ottawa Marathon for me and I came in from Washington State for it. If you’re bold, take advantage of the Lumberjack Challenge and do the 2K/5K/10K on Saturday and the Full on Sunday.

The Expo: At the Shaw Center, I walked there from my hotel. Held Thursday/Friday/Saturday. Picked up my bibs (kits in Canada) on Friday with no wait. Only swag per say in the bag was the shirts that you get for signing up. Good amount of vendors throughout the expo, even found my running shoes on sale, which was a perk.

Race morning: stay within walking distance to the race, parking seemed limited (also coming from someone who’s not local). I stayed what felt like a good 3/4 mile from the race. Gear check available, but not close to the finish if you thought about it and out of the way (off Lisgar and Cartier, which felt like a good 5-10 min walk in the opposite direction of where I needed to go to get back to the hotel).

Time: Full started at 7AM, Half at 9AM

Weather: cool, but warmed up quickly. I was the stupid one who forgot a throw away shirt and ended up dumping a good long sleeved shirt 14 miles in 😢.

The Course: some mild hills, but nothing to cry home about. It’d be nice to have some sort of course elevation map available, though I couldn’t find one on the website. You pass Parliament, the War Museum, War Memorial, Rideau and 24 Sussex. They did have ‘xtra mile’ crew at 35k and 40k to help get you through the last few miles. The last few kilometers were with the half marathon.

Aid stations: quite honestly, need some work. I feel like there was no real rhyme between the distances between them. I wish they would have been every 2K and based on prior reviews, this seems to be a recurring theme. I’d also argue that not everyone drinks Nuun (myself included). An idea would be to alternate Nuun and Gatorade/Powerade, I essentially went without electrolytes because Nuun doesn’t agree with my stomach what so ever.

The Finish/Post Race: needs some definite work. You were filtered into Confederation after getting your medal and cup of water/electrolytes. I finished in 4:49 and there was absolutely zero bottled water/chocolate milk etc in the food area for runners. Food was limited by the time i got there and was nearly out. Essentially half a banana that didn’t look good, half a bagel and bag of chips. There really needed some more options and if you’re going to hand out bags to put food in, it’d be easier to have it pre setup for runners to take and go

Link to this review
Login or sign up to leave a comment.
Christine Guenther recommends this race
(2019)
"Ottawa 2K"

I did 3 races Race weekend (2K, 5K and the full marathon) and considered doing the lumber jack challenge which included the 10k, but didn’t think me legs would tolerate the miles over the weekend (I was right...). 2K is Saturday afternoon and the first race to go off. Some sprinkling rain, nothing to cry home about. Quick race, took me about 10 minutes start to finish, mainly in the neighborhoods and flat. WHat needs worked on is there’s zero organization to who goes where. Walkers are in the front, runners are trying to weave around kids. I was just glad I didn’t trip and fall on my face while plowing over a kid. Great idea for a family fun race, but some sort of organization needs to happen for people legitimately trying to run this or doing one of the challenges.

Link to this review
Login or sign up to leave a comment.
Christine Guenther recommends this race
(2019)
"2019 Half marathon"

Part of the RnR series, though I think run by EDP. Registered for the half during one of the RnR flash sales so I paid 19 euro for the half and ended up making a vacation of it. Originally, race was suppose to be on Sunday April 28, but about 2 months before race day it got changed to Saturday, April 27 due to Spanish General elections. I didn’t realize this until Thursday before race day. I feel like there needed to be better communication with this. There was an email at one point, but with RnR, it’s difficult to decipher important emails from promo emails, so it it was it is

The Expo: Held at IFEMA, easily accessibly by the transit system. Getting there was easy, figuring out where to go if you’re not local was difficult and put me in circles for a little bit. Some sort of markings on which way to go would have been helpful. Decent size expo, easy to get your bib, bags and shirts. Tech shirts, though I’ll probably never wear it. Local/European races at the expo, plus your typical runner gear stuff.

The course: takes you throughout most of Madrid and plenty to see. A little bit of hills the first half, downhill the second half. The first 16-17k, the half and full marathon are together, and then you split off, which helped with the congestion. The Europeans were fast so I feel like it made it harder to actually stay on my own pace. I nearly got plowed over a few times

Water Stops: you get actual water bottles, rather than cups. Double edge sword in my opinion. I wasn’t complaining because the water stops were at least every 5K, so they were fairly far between. Downside is I was trying to not step on them. Additionally, I nearly got pushed over with people trying to grab waters, to the point where I actually didn’t feel safe at a few of them. Gatorade at 1-2 of them, gels as well. Need to look at more water stops and water cups over bottles.

The finish: bag of food handed to you at some point, but you had to walk awhile for it, had water, food and Powerade. Medal also given pretty quickly. Fairly congested, even after you got out of the runners only area. Podiatry, stretching area and massages available

Overall: 3.5 stars. Need to work on getting the waves out better to reduce congestion, better communication, especially with date changes, and more water stops on course

Link to this review
Login or sign up to leave a comment.
Christine Guenther recommends this race
(2019)
"The hills just kept coming!" 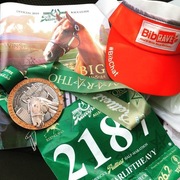 Second race in Kentucky ever and first Run the Bluegrass. I know people who love this race, so I figured I’d come run it. I knew there would probably be hills, but you really have no clue until you come and run the course itself.

The Expo: Thursday afternoon and 11-830 on Friday with race day bib pick up as well. Plenty of vendors and local stuff to see, which was great. Pick up was at Keeneland Race Course, which is right by the airport. Bib numbers are emailed week of, or you can look them up race day. Shirts/jackets (if you upgrade) are towards the end. Plenty of parking available as well.

Race Distances: half marathon, 7 miler and the Yearling (3.65 miles).

Race day parking: plan to be there at least 45 min to an hour early just to park. Parking is at Keeneland and you enter through gates 1 and 2. Gate 1 was pretty backed up and I ended up going through gate 2, which took a whole lot less time.

The course: very scenic, be ready for hills. Did I mention hills? The course starts in Keeneland and takes you through the property before heading out onto the roads of Lexington. Be ready for not a whole lot of spectator support, but that’s ok. While on course, plenty of horse farms, distilleries. Weather wise, overcast and 50s/60s with some rain about half way into the race (though nothing heavy). Aid stations on course, though I couldn’t figure out the spacing between them. Aid stations had water and something called SWORD, which I’ve never heard of.

The hills: they’re rolling and they never let up. I’m ok with some hills, but they never let up. Don’t expect a PR on this course. I’m typically 2-2:10 but once I saw the hills the first mile or two, I knew it was going to be a long race. One of the few races where I saw a whole bunch of runners walking because the hills were that crazy. Hill work outs should be your friend in preparation for this race

Swag: best swag I’ve seen in awhile medal wise. The medal had Justify on it and it’s 3D like. You have the option of the standard shirt or upgrading to a jacket, which I ended up doing.

Overall fun race, still unsure if I want to put myself through those hills again though!

Link to this review
Login or sign up to leave a comment.
Christine Guenther recommends this race
(2019)
"Portland Shamrock 5K"

First time doing the Shamrock Portland Race and I had a blast! I ended up registering for 2 races due to how spread out they were and the 5K was the first of the morning.

The expo: at the Oregon Convention Center with pick up Friday and Saturday. Easy to get to (I walked from my hotel), but can't speak from a parking stand point. Bit of a walk around some interior construction this year, but plenty of space once you were in the expo. Bib pick up was painless, just remember to have your QR code pulled up, as they scan it and assign your bib based off your distance there at the expo. Shirt pick up just as easy. I would bring your own bag though, there weren't bags passed out. Plenty of vendors and races to visit and if you're looking to buy stuff, keep in mind no sales tax in Oregon!

Location: downtown Portland along the river

The course: the 5k is out and back for the most part, though you due a bit of an outpouch by turning onto Taylor, then SW 2nd, followed by W Salmon before getting back on SW Naito Parkway Drive. A little bit of a hill, but nothing compared to what the 15K and half marathon deal with. 1 water stop that I saw on course, miles were marked and it's a fairly quick race!

Post Race: be ready to join in a morning long party. Plenty of food trucks, music, post race refreshments, beer garden, soup, etc. Medals for the 5K this year as well, that was new this year.

Overall, a fun race and an easy way to get the entire family involved if you didn't want to get in on the longer distances.