I want to preface this review by saying the only reason why I gave a below average rating in the Parking/Access category is due to the traffic that I ran into driving to the race location and leaving the race location. As annoying and frustrating NY traffic is, it was completely out of the control and no fault of the race directors.

The Tesla Hertz Trail Series is a younger multi distance race with the first running of it in 2013. Managed by the Happily Running race company, the Tesla Hertz series offers 10 mile, 50k, 50 mile, 100k, and 100 mile distance options on a relatively flat trail loop of just over 10 miles. It takes place at the Rocky Point State Pine Barrens Preserve in Long Island, NY. The course is entirely single track trail with a short (about 1 mile) out and back to the mid loop aid station right around the halfway point of the course. The course has a few short hills, but is for the most part flat with somewhere around 240 feet of gain per 10 mile lap according to my Garmin data. The course isn’t technical. There are some roots and rocks as you would expect on a trail, but entirely runnable. However, the one aspect of technicality that this data doesn’t show is all of the twists and turns on the course. Very little of the course is a long, straight runnable stretch where you can just get into a rhythm and feel the flow of the trail. It is almost constantly twisting and forcing you to lean into turns to maintain a pace and stressing your hips.

Link to this review
Login or sign up to leave a comment.
scott snell recommends this race
(2017)
"Wrapping Up The PA Triple Crown Series" 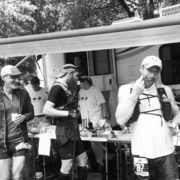 If you are looking for a challenging 100 miler, Eastern States 100 may be perfect for you. With around 20,000 feet of elevation gain, 102.9 miles of mostly single track trail, and some extremely technical terrain, Eastern States is no joke. The role of race director was taken over by David Walker this year, and he did an amazing job in my opinion. The organization of the race was amazing. The amount of swag was surprising. The scenery is stunning. I have zero complaints. Here is a short excerpt of my race report:

With that somewhat bittersweet news, I continued on to the next aid station which I expected to be a water only aid station. Upon arrival, it was anything but. They had perogies there. I ate my fill and continued on to AS9, Halfway House (mile 54.7), where I saw my wife and boys for the last time before the finish. There was one additional aid station for spectators, but I would arrive there too late for my wife to bring the boys there. She had to take them back to camp and get them to bed. With the sun beginning to set at the time, I said my goodbyes and thanked my wife for being so supportive. The inspiration that kids bring is irrational. I moved on and focused on covering the distance. My goal was to continue to take the course on in sections. At every aid station I would ask how far it was to the next and then focus on making it there. To assist that goal, every aid station had a print out posted of the distance and elevation profile from the current aid station to the next. Mad props to the race director for that.

This strategy worked great for me. I covered miles without thinking about the majority of the remaining distance I had to cover. It wasn’t until AS12 that I got my next surprise. At the Alegrines (mile 62.9) aid station they were recording and posting runners’ places and arrival times. The last I had heard from my wife at the halfway point was that I was in 38th place. At this aid station, while I was casually eating a grilled cheese sandwich, they announced that I was in 16th place! How that happened, I have no clue. It scared me more than it motivated me. But I continued on just hoping that I could at least make it to the finish with a top 20 spot.

Link to this review
Login or sign up to leave a comment.
scott snell recommends this race
(2017)
"Running A Tough 100k The Day Before A Wedding Is The Greatest Excuse For Being A Crappy Dancer"

Worlds End Ultramarathon offers 50k and 100k distances. I chose to run the 100k as that is the second race of the PA Triple Crown Series and successfully completing the series is my ultrarunning goal for 2017. I feel that the best way to describe Worlds End is simple and only requires one word: relentless. This is how another runner described the course to me early in the day and as the day went on and I covered a greater and greater distance, the closer to perfection that word became. Just look at the elevation profile and I think you’ll agree that “relentless” is a great descriptor. The technicality of the course hits you early and never lets up. They call it Rocksylvania for a reason. Stream crossings? Check. Maybe not all years, but at least this year many sections that at first glance looked completely and easily runnable were anything but due to the ground being so wet that my feet sank into the shoe sucking muck. For all of these challenges I was accepting; my greatest challenges during the race were not due to external factors such as weather or trail conditions. My greatest hurdles during Worlds End were of my own doing, primarily due to poor planning or a total lack of planning.

Link to this review
Login or sign up to leave a comment.
scott snell recommends this race
(2017)
"First Race In Which I Peed My Pants"

The 2017 Ultra Festival is a multi distance event put on by NJ Trail Series. The distances offered include half marathon, marathon, 50K, 50 mile, 100K, and 100 mile. Something for everyone, right? The 2017 race took place on April 1st at the Princeton Blairstown Center in Hardwick, NJ. The course consists of two loops which both start and end at the race headquarters which also acts as the solo aid station. The two loops were referred to as the forest loop and the lake loop. Respectively, the distances of the two loops according to my Garmin were 3.1 and 2.25 miles making each lap about 5.35 miles long. The 50K distance consisted of 5 full laps and an additional lake loop which my Garmin recorded as a total distance of 28.99 miles with 4200 feet of elevation gain, the majority of which was on the forest loop as the lake loop is relatively flat.

Race day followed a day of severe thunderstorms that dropped a tremendous amount of rain in a short amount of time. To say the trails were wet is one of the greatest understatements that could be made. Although there are four water crossings along the route of the course, many sections of the trail had become miniature creeks with flowing water due to the previous day’s storm. It was basically the best situation for someone like myself to overcome their fear of running with wet feet. Facing this fear and dealing with it was better than any training run I could have planned to prepare for the conditions of the Hyner 50K. Unfortunately I wouldn’t appreciate it until three weeks later when I was running some similarly wet trails at Hyner View State Park with soggy Lone Peaks on my feet. Just before the start of the 50K the race director, Rick McNulty, let us all know about the trail conditions. In short the message was to plan on having wet feet. With that encouragement and advice, we were off for our first time around the forest loop.

Link to this review
Login or sign up to leave a comment.
scott snell recommends this race
(2017)
""If you never have you should. These things are fun, and fun is good." -- Dr. Seuss"

The Hyner course is technical and challenging, but also offers some breathtaking vistas along the way and beautiful scenery for its entirety. If you live on the East Coast and thought you had to go “out west” to find breathtaking and scenic trail courses with challenging terrain you were right and wrong. You do have to go west, but only as far as central Pennsylvania. Other than at the start and the finish of the course when you follow a short stretch of road to use Hyner Bridge to cross over the Susquehanna River, the rest of the course is basically all single track trail with a few fire roads mixed in. If you like hills, the Hyner course will not disappoint. The 50K course has few flat sections and will treat you to basically five big climbs totalling 7,232 feet of elevation gain (according to my Garmin). The course brings the climbs early as well. Maybe about or a little under two miles from the start we hit the base of the first major climb, lovingly named Humble Hill. This climb is steep and lasts for over a mile before we reached the top and were treated to the beautiful view of the Susquehanna River from the peak of Hyner View. I felt good during this climb and forced myself not to push too hard, accepting my pace based on my effort level rather than aiming to maintain a specific pace. I knew that I still had a good distance to go and a lot of climbing to do after this hill and I did not want to blow up my quads before the finish. What I thought was really awesome about this first climb of the race wasn’t just the view, but the fact that the Hyner View overlook at the peak is highly accessible by road allowing spectators an easy means of access. This allowed for a big group of spectators cheering right at the peak of the first major climb. It was a welcome and motivating sound as I got near the peak to hear all of their support. It also felt like getting completely recharged from their energy after having just spent so much to make the long climb to the top.