The Krispy Kreme Challenge is a race that should be experienced by all. Such child-like joy and excitement! The thought of running 2.5 miles, then consuming a dozen donuts, followed by 2.5 miles back the way you came sounds horrible but it's so worth trying. There is a "challenger" entry as well as a "casual runner" so you have the option of not making a pig of yourself with the donuts. There's a costume contest as well and people bring their "A" game for it. I've run the KKC 8 times and don't intend to miss it any time soon.

Donuts: Delicious! The "hot light" isn't on and it's the middle of winter, but they are as fresh as it gets.

Course: Nothing to write home about. It's from the NC State campus to the donut shop and there isn't a whole lot to see. There are a few hills, but nothing too scary. I wouldn't worry, because you have no chance at a 5 mile PR with those donuts involved.

Expo: Not much to it at all. Like nothing to it. They sell some KKC gear and that's about all there is.

Finisher Medal: They've only had finisher medals once in all of my times running the race and you had to pay $5 extra for it. Not a bad deal since the early entry was only $20. The medal is pretty awesome though.

To reiterate, you will not regret running this race if you like donuts and have a soul. So much fun!

Link to this review
Login or sign up to leave a comment.
Randy Birnschein recommends this race
(2016)
"A Great Race Since 1974"

Honestly, I'm a little bit biased because I live in Lynchburg. That doesn't change the fact that this is a great race. The organizers do a fabulous job. There's a great food spread for finishers. The finisher medals are always top notch. The spectators are great. The course is a killer, but a ton of fun to suffer through. There are massages! It seems as though the whole city of Lynchburg is there to be a part of it. The evening before the race, there are kids' runs of varying distances and a ton of activities for the families to enjoy. This event is more than a race. I encourage anyone to pay Lynchburg a visit and have a great time.

Link to this review
Login or sign up to leave a comment.
Randy Birnschein recommends this race
(2015)
"So friendly, so fun. "

I've run the Richmond Marathon 3 times and have signed up for 2017. The spectators are some of the best. They cheer loudly and even offer snacks and adult beverages. The course is interesting enough with only a few areas lacking in crowds or scenery. Richmond is also a great place to celebrate a race well run. Sign up and you won't regret it!

Link to this review
Login or sign up to leave a comment.
Randy Birnschein recommends this race
(2014)
"Beautiful, Historic, and Fast!" 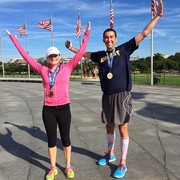 What a great race! I'm not totally biased because I was in the Navy hehe. Seriously, DC is such a great city to run a race. So much to see all around you. The course is pretty darn flat. This was a big PR for me at the time. The race shirt was a long sleeved shirt. The medal was pretty cool. I can't think of any reason NOT to give this one a chance. You won't regret it.

Link to this review
Login or sign up to leave a comment.
Randy Birnschein recommends this race
(2011)
"MCM is a Great and Inspiring Marathon"

It's been quite some time since I ran MCM and I'm just now reviewing it, mainly because I want all of my states to show up on my profile. I was fortunate enough to run it before there was a lottery system. I didn't do well at all, but it certainly wasn't the race's fault. I went out fast and wasn't in shape for it. The course is absolutely beautiful. I'm not sure there are any places I've run with more to see than Washington DC. So much history and so much inspiration. Having the marines around will keep you motivated too. This is more than a race, it's an experience. I'll be back to run it again someday.