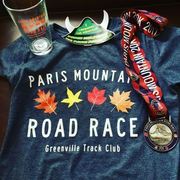 This year was my 8th year running the 20K. I have seen many changes over the years. They even changed the distance from a 20K to the half marathon for a few years in an attempt to attract more runners. The truth if this race is small because it is tough, and I love it.

It is one of my favorite races in my hometown of Greenville, SC. It finishes the Greenville Track Club's annual race series. It has become an annual tradition for me and many other Greenville runners. I think that is what I love about this race. We all know how tough it is, but many of us keep coming back every year for more mountain fun.

Packet Pickup/Expo:
Packet Pickup is at Timmons Arena the morning of the race and is always very organized. There is not an expo because it is a smaller race.

Every year the swag keeps improving. For the past few years they have been giving 20K finishers medals and a viking helmet. This year we received a nice swag bag, t-shirt, medal, and a magnet of a viking helmet. I thought that was better because I now have three viking helmets in my apartment.

The course always starts in Furman where you start your assent up Paris Mountain. It is a 2 and a half mile climb up the mountain. After the climb, you have a set of rolling hills to the bottom. You are the half way mark at the bottom of the mountain, but the hills are not over. The last 10k is a set of rolling hills through some neighborhoods until you finish. They changed the location of the finish this year. In the past you would finish down hill and have a flat finish in. This year we ran to the back of Furman and finished with one more hill.

In the past they have had Queen and King of the mountain for the first male and female to make it to the top. This year they did not :( But they did add cash prizes and every overall and age group winner received a pint glass with this year's race logo.

Overall I would recommend this race but I would advise runners to be aware of what they are signing up for. This is not an easy race, but it is fun! Also if you don't want to do the 20k they have added a 10k and 5k race as well.

Link to this review
Login or sign up to leave a comment.
Brooke recommends this race
(2017)
"The People's Marathon Needs to Corral the People" 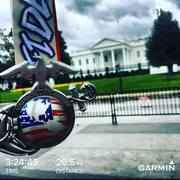 Overall I loved this race. I have come here the past few years as race support and this was my first time running it.

The expo was okay. I think there should have been more outside races represented there. Getting there was chaotic. It is not located near the star, finish, or any part of the race. It took us pretty much all day to get there, pick up my race packet, and then make the trek back to our hotel.

My number one issue with the race was the "corral" at the start. MCM for some reason trusts thousands of runners to corral themselves. They have large signs of what paces should start where, but runners are not officially assigned to a time corral. This works in smaller races but MCM is too big for this to work and they need to do better.

I started with the 3:15 pacer and when we went over the start, we were still walking, barely even running. I had to weave through at least 200 people who should have been in the 5-6 hour pace group. There is absolutely no reason this should happen in a race this big. If I was late and had missed my corral, it is my fault. I was on time, I placed myself where I knew I could finish and was stuck behind people who had no place at the front. It may sound harsh, but it is running etiquette 101. Know where you should start, because you could be in the way and ruin someone else's race. If MCM had corralled runners based on submitted entry times like most big races, this problem could have been avoided.

Once I was able to settle into a comfortable spot (mile 4) the race went as well as could be expected. The weather was a bit warmer than I would have liked, but they had water and Gatorade stops at almost every mile. I do wish they had water on the overpass coming into Crystal City because that is the section that was the most exposed to the sun and it was the longest between water stops.

Running around the monuments was incredible. The spectators were everywhere and very encouraging. My fiance, his mother, brother, and my mother were easily able to pop in a run with me for a bit. Something I really needed towards the end of the race.

Just a heads up if you plan to run this marathon, you finish on a hill. I mean it is the Marine Corps Marathon. The post race festival was one of the best I have been to. Brooks was giving away free bacon !! even fake bacon for vegans and Ultra rewarded marathoners with two post race beers.

The medal is one of the coolest I have added to my collection.

Overall I would recommend this marathon. Just be aware of the frantic start, allow yourself a day to go to the expo, and don't forget the last .2 is uphill :)

Link to this review
Login or sign up to leave a comment.
Brooke recommends this race
(2017)
"Flat-Up-Around-Down-Flat" 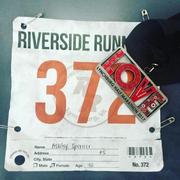 I ran this race as a jump start into Marine Corp marathon training. I had taken a week off the week prior to hiking in California for my big 3-0. I also got engaged, so it was a good week off.

My race strategy for this half marathon was just purely to test my fitness and to finish since this is the final race in the Lynchburg Road Runners Summer Race Series. I had been racing short distances all summer, so I had the speed but I did not have the endurance to finish the race as strong as I would have liked.
This half marathon is not the easiest course, but it is also not the hardest. Do not expect a PR on this course, unless you are a master of hills. If you are the Yoda of hills- then this is your course.

It starts on Percival's Island and its a nice easy, flat running trail until the fun begins. After you turn around at the 3 mile mark you run back towards a hill you passed. A hill you probably thought to yourself- "Oh good, we are passing that hill and I will not have to conquer that today."

Fertilizer hill is this gradual climb of fun on a gravel hill. It takes you to a loop that you will run twice of rolling hills. Once you have finished most of the race you get to run down this hill and then its a flat race to the finish.

If you are a strategic runner- I recommend planning to run fast in the flat areas and don't waste your energy on the hills.

I ran out fast in the first mile and held on for a third place female overall finish. It was nowhere close to a PR, but I did what I wanted to do. The weather wasn't too bad this year and the swag was on point. T-shirts and race medals both had the Percival's Island LOVE sign on them. Overall a great conclusion to a fun race series.

Link to this review
Login or sign up to leave a comment.
Brooke recommends this race
(2017)
"Concrete Jungle"

This was my slowest marathon, but not at all because of the course. I did not pick up training right after Chicago.

The hardest part about this marathon despite my lack of long runs was running on concrete for 26.2 miles. Training for this if you are not a local I recommend running on as much concrete as possible. Other than the surface, overall this was a great marathon.

It was slightly humid for me since I was traveling from a snowy Virginia, but this is another thing you should expect if you are traveling to Houston. Concrete and humidity.

The crowd was there for most of the 26.2 miles. I was happy to see family on the course. This is a great marathon for spectators because there are several spots you can see your runner.

I recommend this marathon if you are looking for something flat, you enjoy a post race ice cream and beer, and you like race swag (who doesn't)!

Link to this review
Login or sign up to leave a comment.
Brooke recommends this race
(2016)
"Speedy Course through Chi Town"

EXPO: Easy to get to and very well organized. I recommend talking a walk on the biking trail afterwards because you walk by the Chicago Bears stadium.

This course is the home of my PR. Pro Tip: They have a line that marks the course, if you run on the line you won't run "extra". It is a FAST course, so great marathon to go for that BQ or a PR. If there were hills, they weren't memorable.

The crowd was excellent and this is a great course for spectators. It is very easy for your race support to see you several times during the marathon.

Post Race: You get two Goose Island beers- I call that a plus in my book :) Family meet up was pretty crowded but that is to be expected.

Overall this is one of my favorite marathon experiences. Great city and even better course!