The Blueberry Stomp, tied into the Blueberry Festival in Plymouth, IN, takes place every Labor Day. You have your choice on either the 15k or 5k. There is also a 1 mile kids fun run as well. The 15kand 5k do start at the same time, which for most races could cause a lot of congestion and confusion, but for this race, it is a very smooth start.
The race starts by Central Park on the North side of Plymouth and heads south through downtown. A tradition at the start is that the race is started with the sound of a large cannon and also stomping on blueberries laid out at the start by the festival queen. The start of the race is a gradual downhill and running straight through town for the first mile and a half before the first turn as you are leaving town.
Shortly after the first turn, the 5k makes another right hand turn and starts heading back towards the park for the finish, while the 15k heads out to the country roads. After the second mile, the rolling hills really begin to hit and it is a lot of ups and downs. It's nothing too bad but it's noticeable. If you take it easy at the start, you should have no trouble.
Miles 2-8 are primarily out in the country with no one out there besides those working at the aid stations (which are very well maned) and your fellow runners. Depending on the day's weather, it can get very hot at this point. After about the 3.5 mile mark, you make a left turn, then run a mile to another left turn, run another mile until another left turn and run a mile and turn right to start back into town. Running around the country mile is a lot better than making a u turn around a cone.
The finish is great. You run in the opposite direction of the festival parade that has already started and you hear the cheers of the crowd as you run by, and it is a large crowd. The finish line is then just past where you started from.
The t shirts for the race, I would like to see some improvements. They are cotton and in my oppinion are too colorful. Every year, an artist hand drawls the logo for the shirt.
The awards on the other hand are very original. Last year it was a coaster and a grill spatula with the race logo. Very unique.
Plenty of food after the race. I think if they change the shirts, this would be a fantastic race. Other than that, I highly recommend it. You never know who will be running it. Last year, hometown girl and Olympian, Morgan Uceny ran in the 5k. I have not heard but I do not believe she will be back this year. If you do come, make sure to check out the rest of the festival. Great food to be had.

Link to this review
Login or sign up to leave a comment.
Mark Davidhizar recommends this race
(2015)
"Watch Oeut For The Trains!"

The Parade 5000 is held along with the Elkhart County Fair in Goshen, IN. The fair itself is one of the top 3 largest county fairs in the nation, so it's a big deal in the area. The race run in front of the county fair parade in front of the crowds lining the streets. The race starts in down town Goshen and makes its way towards the fair grounds, along the outside of the fair grounds and a lap around the half mile horse track before finishing in front of the grand stands. Sounds like a great idea until you consider a couple of things.
1. The heat. The race starts in the afternoon and it was in the kids 80s and very sunny
2. The race started 15-20 minutes later because of local traffic not being cleared from the roads fast enough (this has been common over the years).
3. The course crosses 2 train crossings. There were 3 trains that crossed during the running of the race and everyone got stopped by at least one train. They have tried working this issue out over the years but the train companies will not work around the race.
This is the 34th year of the race and not the first time it was stopes by trains, very slow moving trains.
The competition is very good at this race, the shirts are ok, 50%cotton 50% polyester this year, air stations at miles 1 and 2. No food after the race however.
I would recommend this race if you like hot races and the adventure of trying to beat a coming train.

Link to this review
Login or sign up to leave a comment.
Mark Davidhizar recommends this race
(2015)
"Inspirational run for a good cause. "

The b STRONG 5k is run on the last Saturday of July. It is held in the small town of Bremen, Indiana. It is in honor of a local woman who lost her battle with lung cancer but was an inspiration to others in the community. The run starts and finished at Bremen High School, so there was plenty of close parking. I did not run this race, but my wife did and my kids and I volunteered. Speaking of volunteers, there were a lot of them and they were at every intersection of the race, making sure that no vehicles were allowed on the course. This was a completely closed race course. The aid stations (3 of them) were also very well maned.
The race itself was very well organized. Packet pickup was easy. The only issue was that they could not find one of my daughters on their list, but with the confirmation email, it was cleared up with no problems. The race started on time.
The inspirational part of the race was at the top of "b Strong Hill." They had a bell to ring at the top to signify that you conquered the hill and to encourage those behind you. The teenager who was manning the bell was a teen who had just finished his last round of chemo. At the hospital that he was receiving chemo at, they have a bell for patients to ring when they have completed their last round of chemo, so it only seems fitting that that was his job.
The awards were trophies and back packs to the top 3 overall runners and medals to the top 3 in each age group and back packets to age group winners.
The kids fun ru was great as well. Top 50 kids receivedmedals, and each kid also got a shirt.
Overall this is a great event and very well run race for the first time event. This is not a chipped timed race but they did a great job of getting the times and results quickly. Each runner who resisted On time received a tech shirt. If you registered early, registration was only $15. A great deal!!! I was really impressed by this race. Can't wait to do it in 2016!!!

Link to this review
Login or sign up to leave a comment.
Mark Davidhizar recommends this race
(2015)
"Great 4th of July Race"

This is a small town Indiana race. Although there were only about 125 runners, it is a growing race. For a race in only its second year, this is a very smooth race. The race organizers know what they are doing and know how to make runners happy. All proceeds go towards Hoosier Burn Camps.
The course is very fast and flat and with prize money being awarded to the top 3 overall runners, it brings out some very fast competition.

The course winds through the small town of Bremen, IN. And finishes in the towns park under a large American Flag held up by two of the towns fire trucks. There are 3 aid stations on the course as well with water. The race director is also very open to advice on making the race better. Awards are given out to the top finisher in 5 year age divisions.
This is a great race and look forward to making it a yearly 4th of July tradition.

Link to this review
Login or sign up to leave a comment.
Mark Davidhizar recommends this race
(2015)
"An improved race" 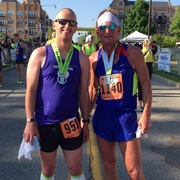 This was the third time I have done the Sunburst half marathon, and this was probably the best I have seen it as far as the course, weather, and volunteers. Sunburst continues to offer a 5k, 10k, half marathon and full marathon. Be aware that early June can be very warm in northern Indiana.
The course for the half marathon changed drastically this year, running along the St. Joe River, into Mishawaka, through the IUSB campus, through the neighborhoods of South Bend and finishing on Notre Dames Campus. There are rolling hills throughout the course with a steep incline at mile 12 called Hallelujah Hill. Typically the course ends at Norte Dame Stadiums 50 yard line, but do to construction to the stadium, that was not the case this year.
The race shirts I was not a fan of but the medals were nice this year.
For the money, this an expensive race and you don't get too much in return. For more photos from the race, visit my blog at www.marktoboston2015.wordpress.com