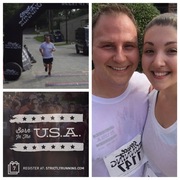 Strictly Running never disappoints with their races. I wasn't entirely sure where this one was being held exactly but the address they gave to GPS lead me right to it. Tons of parking, and not very crowded. It started right on time. The website said "flat and fast" which I was skeptical about because this is Columbia and I don't think I've seen 4 miles of flatness consecutively since i've lived here ;). But for the most part it was and easy course.

There were two (maybe three?) water stops on the course, and monitors with time at each mile. The course itself was beautiful, and the race seemed to fly by (even though I was super slow because of the insane humidity.) At the finish line they had fruit, water, coffee, and donuts for the runners. This was a plus for me because donuts are the quickest way to my heart.

I've done other color run's before and had a really great experience. But I felt that the Color Vibe nickeled and dimed you to death, and really wasn't worth it. For starters, parking was terrible. Getting in wasn't too bad, but I finished fairly early and was leaving as people were still running. To get out of the lot, you had to DRIVE THE SAME ROAD PEOPLE WERE RUNNING. Seriously? No one thought about this? It was ridiculous.

Their registration "deal" was get a free kids registration when you sign up an adult. The woman I nanny for generously paid for me and her son to do the race together, so I don't know exactly what the registration price was, but it was somewhere between 35-40 dollars. Not too bad, but compared to The Color Run which cost the same per registration you really don't get anything for your money. You had to pay $20 for a T-Shirt if you wanted it, or you could pay for a bag with sunglasses, a t-shirt, and a bandana. For such a big named race you would think that they could throw in a T-Shirt. Also, if you wanted color to throw around for the big color party at the end you had to pay for that. (Compared to the Color Run where you get color packets, a t-shirt, a headband, face tattoos, and a medal it really felt like a rip-off.) After buying a shirt for me and the shirt/bandana/sunglasses combo the total came to almost 65 dollars.

The race terrain itself wasn't too bad, it was at a high school which struck me as odd at first. Not really much to look at, but it wasn't terrible. Unfortunately I was very disappointed in the race overall. I would not attend again and if anyone asks me if they should do it I would suggest they go with the original Color Run brand.

Link to this review
Login or sign up to leave a comment.
Kristin recommends this race
(2015)
"Tons of Fun Overall "

This was such a fun race to do. It was incredibly easy to register for, and all the information needed for race day was sent in an easy to read PDF about a week beforehand. Packet pickup was available the day before (although it was a good 30 minute drive from where the race was, I thought that was a bit odd) or on race day at the expo which was very convenient. The expo was well organized, and even though I was picking up my packet that morning I stood in line for less than five minutes while waiting for my packet. Parking was a pain in the butt, but anyone familiar with the Downtown Columbia area where the race was held would expect that. Arrive early.

They started the runners in waves on a first come first serve basis, and since I was in the middle it took about 30 minutes for me to actually be able to start. Not a big deal though because the atmosphere was very fun and energetic, and the DJ kept everyone well entertained.

The course itself was typical of the area: hilly and difficult at some parts, but overall a good mix of challenging and easy enough that a beginner like myself could still enjoy the race. Of course the color stations (five of them, I believe) were the best part.

Overall the race was fun, well organized, and the swag bag was WAY better than any other color themed races I've done (that I've paid more for). You can tell they don't skimp on the good stuff. I plan to do it every year for a fun race and I highly recommend it.