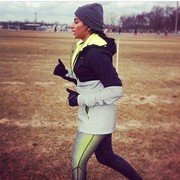 In early February, a coworker mentioned to me that she would like to try to train for a 5k. So I suggested we find a 5k to train for and we could run it together. Due to timing (she was leaving for India in April and wanted to run it before then) we looked up 5ks in the Chicagoland area and decided on this one. It is in Oak Forest around a lot of forest preserves, so I figured it might involve a good trail run. It is also a smaller race so I figured it might be a less overwhelming place to start, and also the price was right (~$25).

This race is a fundraiser for Michael Cusack's Hurling Club and the Irish community in Chicagoland. This past year the race had 207 runners, which was its largest ever turnout. We definitely stuck out as outsiders, as (a) neither of us are Irish and (b) it seemed to be a race for a community that knew each other pretty well. Thankfully, Irish people are incredibly nice, so it wasn't too awkward.

This race is held in the middle of Oak Forest at a Gaelic convention center (who knew that existed? We didn't). There's free parking. The race itself is just running 2 loops around the grounds, which is basically just one flat field that is fenced in. Not much to see except gravel/grass and fences and some orange cones. I was a little disappointed as the area is surrounded by beautiful running trails in the woods, but I can understand as a fundraiser they would make a larger profit staying on their own property. This past year it was right after a week of rainfall, so the grounds were unbelievably soggy/wet.

Still, perhaps because there were a lot of moments of laughing at ourselves and the race (Where ARE we?! Why are we here? What is this place and why are we running around a parking lot? Does everybody here know each other except for us?) ...we still had a really fun time. My friend felt accomplished after running her first 5k and I felt inspired watching her complete that goal.

Pros:
+ legitimate Irish beer at the end of the race from a bar (Guinness, Harp, or Smithwick's on tap)
+ easy access to race, well managed, lots of treats after the race, t-shirt included
+ fun Irish theme with fun Irish people

And yet... my co-worker and I are seriously considering making this race an annual tradition, so you will probably see us there next year.

Link to this review
Login or sign up to leave a comment.
Cass recommends this race
(2013)
"Better than expected, fun theme" 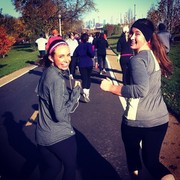 First of all, I had heard a lot of horror stories about the expo and management of this race from 2012 so I was hesitant to sign up at first, but I really wanted to find a race with a fun theme to run with my roommates this past year.

I think because they got so much negative feedback from 2012, the management of this race really picked it up for 2013. The expo was well organized and the aid stations were well staffed and placed.

I will say that the beginning of the race lacked a little organization - though you were assigned a corral it was noted that they were "first come first serve" - which doesn't make much sense to me. It took quite a long time to get to the start line (40 minutes for us!) - this race is very crowded. If you are running it for the 5k it would not be a race to run for time! There are just too many people that you wouldn't be spread out enough in 3 miles. The 15k finally got comfortably spread out by mile 4 or so. Still, the first few miles are ran together with 5k participants so it gets jammed.

There's also this strange part before you turn back north where you are running alongside the highway that was a little weird. As you can imagine, 90/94 isn't very scenic. The route takes the lakefront path up the last few miles, which is very pretty, but the path is narrow for the amount of people running.

Overall, I'd say this is more of a "fun" race to encourage fellow friends to try a 5k or 15k with you. The chocolate at the end of the race is actually pretty great! They give you a fondue bowl of chocolate with several things to dip in it. The tech hoodie is also a big selling point for this race, and the 2013 hoodie was pretty nice - it even had a little zipper in the back to hold keys, etc.

Link to this review
Login or sign up to leave a comment.
Cass recommends this race
(2013)
"Fast and flat course in a great city!" 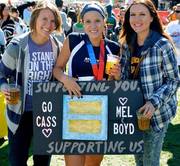 This was my second marathon and my second time running the Chicago marathon (it was so nice I had to run it twice)! The course takes you through several neighborhoods and has great views of the city. It is a very large race - 45,000 runners - but it is part of the international marathon series so the group is pretty diverse. As a Chicago native, I'm biased, but I think it's a beautiful city to run in. The course is very flat and fast - a great race for your first marathon or to try to get a PR.

I think this race is very well managed. The expo is HUGE and operated very well - definitely gets you excited to run the 26.2! The race is sponsored by Nike so the swag and Nike Chicago marathon attire is pretty great. There are plenty of water stations and aid stations and LOTS of volunteers throughout the entire process. I think the race (October) is generally pretty great weather to race in, especially for this past race in 2013.

You hit Chinatown right after most runners hit the "wall" which is a pretty great pick-me-up, though mile 23-24 aren't very scenic - it picks up in the last mile as you run up Michigan Ave towards Grant Park. There were spectators EVERYWHERE this past year - I didn't recall a single part of the marathon this past year didn't have crowds of people cheering.

It's going to be hard for me to top this marathon!

I ran this half marathon as part of my training for the Chicago Marathon and I figured it sounded like a fun "girl power" race. The race itself is very pricey for the course - the race is around $100 (I think more for 2014) and the course is just the lakefront path in Chicago. The price would be more justifiable if they had to pay to close down streets to run the race, but instead the race was on a trail that was simultaneously open to the public. And if you're a runner in Chicago, you know that the lakefront path is packed in the weekends on the mornings with other fellow runners. I found the course a little annoying for this reason and because the markers were messed up and hard to follow. Several runners ended up running much further than 13.1 due to lack of direction.

The expo was at a nice hotel downtown and was very small but cute and included free tea from a sponsor, Honest Tea. The swag is pretty great for this race - the shirt has a great design and you get nice tote and a yoga mat as well. The post race included wine or champagne from Barefoot, which goes with the girly theme but just isn't something I want to drink early in the morning! They also gave out little lunch boxes, a necklace and Muscle Milk light at the post-race which was nice. Other than that, the post race party wasn't much to brag about. This race might be fun to run with a group of girls if they are interested in running their first half marathon but aren't too serious about time and want a more aesthetic experience - but I feel like more avid runners would prefer a race with better management and course guidance.

Link to this review
Login or sign up to leave a comment.
Cass recommends this race
(2013)
"Great run, great cause"

I ran this race with a group of friends last year and plan to make the trip to Milwaukee to run it every year that I can. My best friend's boyfriend set up a team last year in memory of his mom that passed away after a long battle with cancer.

Pros:
+ Great cause
+ The 5k race is ran in two loops through the Milwaukee County Zoo. It's pretty cool scenery!
+ There are two water/aid stations for the 3.1 mile race
+ Easy access/free parking
+ Well organized and managed
+ The race is very inexpensive with a lot of perks: usually around $30 (if you donate or get donations you can get a t-shirt if you get up to $50, which includes your original expense of $30 for the raise), there are plenty of post-race treats (and beers - no beer ticket here - you can get more than one if you're feeling like you need another!) and FREE admission to the zoo afterwards (which is normally $15)
+ Great race to run with a group of friends


Cons:
- As comes with the territory of running through a zoo, there are some intense smells you may experience during the 5k. But I don't mind, it's worth the occasional smell to run past some monkeys/kangaroos/lions/tigers/bears (oh my!)

This is definitely my favorite 5k I've ever ran and I am SO excited to run it again in 2014!