This race is put on by the Atlanta Track Club and they do not disappoint! They put on top-notch events, and I got to experience that with the PNC Atlanta 10 Miler.

As a Florida runner, the hills on this 10 mile route are no joke. I heard from the locals that this race are definitely one of the most challenging, and I believe it! My legs were definitely feeling the 785 feet of elevation gain. I highly recommend getting in lots of hill work before running it. I know I will next time!

This race has amazing cheer zones, each one is themed. The consist of 10 local non-profit groups selected by the Atlanta Track Club Adopt a Mile program. Groups were super enthusiastic and I highly enjoyed them all. There were bananas, dinosaurs, butterflies and more! I loved them all. Atlanta Track Club donates up to $3,000 to each of the non-profits depending upon their level of assistance, participation, and enthusiasm. There is also a "Best of the Best" where event participants can vote and the winner gets a $500 prize.

A big part of the 10 Miler is conquering Cardiac Hill. It's located at about mile two, and is the stretch of Peachtree Road that falls more than stories in elevation in less than one mile. The top 50 men and women who run down Cardiac Hill the fastest earn a prize. It's quite a challenging mile of the course, and I loved seeing all of the motivating signs along the way. It became my fastest mile of course, but nowhere near that of the top folks. Top men were starting at a 4:56 minute mile, and top women, 5:32 minute mile! Wow!

Come out and run this race, because it truly is a great one. Just be sure you get your hill work in before hand so that you are ready! ;)

Link to this review
Login or sign up to leave a comment.
Shannon Chenoweth recommends this race
(2018)
"Hot, Fun Race for Watermelon!" 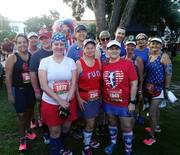 This is my 4th year running the Watermelon 5k in Winter Park, Florida. This year, it was actually sponsored by Florida Hospital, and not Hunter Vision which is a change from previous years.

Watermelon 5k is always well put on, as Track Shack Race Management truly is the best. The race has plenty of volunteers who truly are the greatest, and some awesome ice-cold watermelon to enjoy after you finish running 3.1 miles.

The race begins on Park Avenue and goes down New York Ave through to Pennsylvania Ave, back to Park Ave, then off to Interlachen Ave, finishing right on Wellborne. It gives you a nice 3 mile "tour" of beautiful Winter Park.

I always run this fun 5k with my running friends and even though it's a hot and sweaty one, i have a great time. We lucked out this year in that while it was humid, the sun didn't come out until right when we were head across that finish line.

This isn't a timed race, as all of the Track Shack holiday races are for fun. You can come out and run, run/walk, or walk the event, whatever you'd like. Track Shack and the City of Winter Park encourages everyone to be able to complete the race within an hour, as the roads will begin to reopen not long after that time.

If you're in Central Florida and looking for a fun 4th of July running event, this is definitely one to put on your list to come out and do!

Link to this review
Login or sign up to leave a comment.
Shannon Chenoweth recommends this race
(2018)
"Beautiful sunrise view and great bling!"

This race should be on your bucket list of half marathons to run in Florida. Major highlight is the sunrise view as you come back over the causeway. Really awesome way to start your day.

The race offers bib pickup at three local Fit2Run stores in the area between Wednesday, Friday and Saturday before Sunday morning's race. This is in addition to race morning pickup, so many options for getting your packet before the race which is great. I was impressed that when my friend and I called during our drive over from Orlando, they held our packets for us beyond the 5pm time listed. That was definitely eased my mind from doing race morning pickup.

Race morning had a bit of backup when it came to getting parked, but it happens at races. I would suggest getting there up to an hour before the race start time to avoid that. Once we got into the parking area, volunteers got us parked quickly and we had enough time for a port-o-let stop (a must before a race LOL!).

The race itself was nice, so many volunteers out on the course, especially at the aid stations. They really made you feel good and were great with water and Gatorade Endurance. I was impressed with the volunteers, and I appreciated them a lot. Some of the best I've encountered!

Like I said before, the sunrise coming back over the causeway is just beautiful. After having a bit of my own struggle with a crazy sock (see my blog review, link at bottom), it made me feel relaxed and smile at how beautiful it was. Florida beauty at it's best!

There were some fun, motivating signs along the course that I enjoyed seeing. For me, fun spectator signs or signs by a race give the experience a little extra greatness. Some signs were about food since the main sponsor is First Watch, while others were just generally inspirational to keep you going.

The finisher party was full of food and beer if you are into that. Even as a back of the pack finisher, there was still plenty of breakfast food left for everyone. You could get pancakes, parfaits, bananas, muffins and more.

A huge thing about this race, besides the big bling (and it's big!) is the photos. The race offers FREE race photos to all participates! It's a great perk and I love it when a race offers free photos.

I would most definitely run this race again. It is well supported and the race management does a great job. The only thing I would like to see is more options for vegans (maybe a vegan smoothie or parfait?). It's a race I plan on going back to run again in hopes of getting a better finish time. It's a course that I can see many folks getting a PR on.

Link to this review
Login or sign up to leave a comment.
Shannon Chenoweth recommends this race
(2017)
"Hilly, But Fun Race"

The Mt. Dora Half Marathon is a race I've thought about doing a few times. I did run the 5k back in 2014, so it was great to come back and run the half this time.

The race is hilly, for Florida that is. There are a couple of hills that are more challenging than others, and I walked up those and would run the down hill portions. If you do a good amount of hill training though, I think the Mt. Dora hills would be easier.

I enjoyed the course, it's mostly through neighborhoods and they are pretty nice. Some of the locals also came out to cheer us on. Most memorable are these two little girls who were on their porch encouraging the runners with bells on. :)

The support is great, I felt that there were plenty of water stops and cheering volunteers along the way. Definitely well-run by the race management. Never felt like there was anything lacking along the race route.

The finish area is pretty neat, since this race is in December, it's taken on a Christmas theme. I enjoyed that there were photo ops with a giant inflated Snowman and Santa. The medal is also nice, this year it was a spinner which is pretty cool.

The only thing I would recommend to the RD is to have more port-o-lets in the starting area, there were only about 6 or 7 of them and I ended up waiting a bit longer than I would have had to if there were more available. Otherwise, I recommend this race, and would do it again.

You can check out my more detailed race recap on my blog: http://girlsgotsole.com/blog/race-recap-2017-mt-dora-half-marathon/

Link to this review
Login or sign up to leave a comment.
Shannon Chenoweth recommends this race
(2017)
"An Annual Winter Park Tradition"

This year's WPRR was the 40th anniversary of the race, and the 6th time that I have run the event. It's a race that I always recommend to fellow runners, and I think it's the best 10k around the area. They also offer a 2 mile option, or you can go all in and do the Distance Dare, which is both the 10k and 2-miler.

I carpooled to the race with my weekday running buddy, Annikki since I'm not living close to Winter Park right now. We found street parking pretty easily, and were close to Park Avenue, where the race starts and finishes. Walking into the race area, I quickly spotted a number of my Orlando Galloway friends.

Once we all made the obligatory port-o-let stop, we chatted for a bit before heading over to the starting area. It's not a corral set-up per say, you just line up according to your pace. We placed ourselves before the walkers and after the 12MM sign.

Before we knew it, the gun went off and the race had begun. I opted to stick with a 30:30 interval (run to walk), as it's become my favorite. A few of my Galloway friends were with me, and we only spaced out from one another after the first half of a mile or mile.

I was keeping a nice pace, and I wondered if I could keep it up. Ended up that I went out a bit too fast, a mistake that tends to happen even still to me. LOL! But, I still felt okay, I knew I was pushing myself, but I wasn't feeling bad.

The last half though of the race got to me. Took all I had to keep pushing and it became a mental game of telling myself that it was just a 5k (the things we tell ourselves)...the bricks on the course are rough in some areas, so that doesn't help matters either. We may run on these streets every weekend, but that doesn't make them easier!

Ended up finishing with a nice time, one I'm proud of, but wasn't a 10k PR for me. This is a race that I have a complicated relationship with because of those brick roads! I love it enough though that that challenge makes me come back just about every year.

After the race, Annikki and I signed up to take advantage of the VIP access. The food in the VIP section was awesome! They had some great vegan options which I loved a lot. There really was something for everyone which doesn't tend to happen at races for post-race food, VIP or not. So, I'd recommend the VIP experience as well.

The Winter Park Road Race always has a great medal, so if it's bling you seek, you don't want to miss it! And, they tend to give out pint glasses the last couple of years as well to finishers.