For the second year in a row, I traveled to Washington, D.C. on the last weekend in October to run the Marine Corps Marathon.

This year was different from last because this year I ran the race with my hubby Bill, my friend Nancy (it was her 99th marathon), and another friend Dennis. Dennis had run the Marine Corps Marathon 30 times before but not since 2007. He wanted to attempt to run it one last time at age 78.

I really like the race shirt this year. It is a black quarter-zip with the phrase “Courage is Endurance for One Moment More” emblazoned on the back.

Race day dawned gray and rainy, but we were prepared. We brought hats, throw-away shirts, and rain ponchos, which we donned before setting out for our 1-mile walk to the race start before sunrise.

In the Marine Corps Marathon, there are three checkpoints – at miles 17, 20, and 22. In order to beat the gauntlet at mile 17, you must maintain approximately a 15 minutes per mile pace.

The first few miles were good. We ran-walked and maintained an acceptible pace. Then we turned into Rock Creek Park. The rain, which had been light up until then, became much heavier and Dennis’ knees started acting up. He began to have trouble sustaining the necessary speed.

Link to this review
Login or sign up to leave a comment.
Laurie Hess recommends this race
(2019)
"Going the Distance"

Last Sunday my hubby Bill and I traveled to Forest City, Pennsylvania to run the D&H Distance Run, a half marathon.

We arrived at the trailhead on an overcast, cool race morning to pick up our race packets and were instructed by a volunteer to park in a nearby field. We parked and headed downhill to the pavillion, where we stood in a short line to receive our race bibs and T-shirts. The short-sleeved T-shirt was a soft poly-cotton mix, my favorite kind.

The starting line was actually on the road leading to the field where we parked, up the hill from the rail-trail, giving us a nice downhill start.

I liked the sound of that.

There were aid stations approximately every two miles. Bill and I decided to get a drink and walk through the aid stations. I was feeling fine until about mile four, when I began struggling again, just as I had done in a similar rail-trail half marathon (The Hellbender Half Marathon), which we had run three weeks before.

To read the rest of the report, please visit:

Link to this review
Login or sign up to leave a comment.
Laurie Hess recommends this race
(2019)
"Flying With the Fish"

On Saturday, the hubs and I traveled east to Somerdale, New Jersey, home of the Flying Fish brewery, to run the Flying Fish 5K. The race premium for the 5K was a coaster. The race shirt cost an extra $20. Bill ordered one; I did not.

The shirts were really nice. They were the type of poly-cotton blend that holds their shape but has a nice, soft feel. The women’s shirts had a V-neck, which I like, and I contemplated purchasing one after the race, but, luckily for my pocketbook, they had run out of my size.

The morning was perfect for running – low humidity and sunny, with temperatures hovering right around 70 degrees. Bill and I picked up our bibs and wandered around the area near the race start.

The 1,000 or so runners lined up at the starting line, listened to the national anthem, and were off at the sound of a horn signaling the race start.

The race took us past a school and through the neighborhoods surrounding the Flying Fish Brewery. There were a few rolling hills, but I would classify the racecourse as mostly flat. Roads were closed and, with one notable exception, traffic was not an issue.

Read my full review at:
https://meditationsinmotion.wordpress.com/2019/09/08/flying-with-the-fish/

Link to this review
Login or sign up to leave a comment.
Laurie Hess recommends this race
(2019)
"Flat, Fun, and Aebelskivers"

On August 10, my hubby Bill and I traveled 45 minutes south from our son’s house in Corvallis through the farm country of Central Oregon to Junction City to run the Scandia Run 5K. Our son Rob graciously volunteered to be our driver, jacket-holder, guide, and photographer.

The Scandia Run is part of a Scandinavian Heritage festival held each year in Junction City. Streets are closed to make room for stands selling Scandinavian foods and crafts, and Scandinavian music fills the air. Modern-day Vikings in horned helmets stroll the streets with women dressed in traditional Scandinavian attire.

My race plan, if you could call it that, was to run comfortably hard, rather than pedal to the metal and I followed that plan very easily. The 5K race course was almost completely pancake-flat (and I mean the American version of flapjacks, not the round Scandinavian “aebelskivers” given to race-goers before by the run). We quickly ran outside of town, into the surrounding farmland.

As the first mile marker came into view, I felt great, better than I have felt during a race in…well in a long time. I almost didn’t trust the feeling and wondered when the slow down would come, but I resolved to enjoy the effortless feeling of being in control and pressed on.

At the midway point of the race, we did a quick turn-around and headed back toward town. I was still feeling really good at the second mile marker and decided to increase my speed very slightly.

To read the rest of the review, please go here:
https://meditationsinmotion.wordpress.com/2019/08/15/the-scandia-run-race-report/

Link to this review
Login or sign up to leave a comment.
Laurie Hess recommends this race
(2019)
"A Hellbender of a Half" 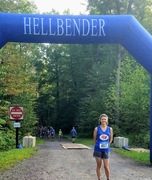 The Hellbender Half Marathon (and an associated 5K) is held in Weiser State Forest in Central Pennsylvania to raise funds for the Roaring Creek Valley Conservation Association, which promotes clean water in the state forest and the surrounding Roaring Creek Valley, thus the name of the race.

At exactly 8:30 we lined up at the starting line and were off, running through the woods on a wide dirt path. Bill and I decided to run together in this race. Our speedy friend was out of sight in no time.

The path we were on was fairly flat at some places and gently rolling in others. Bill and I both thought there were more downhills than uphills for the first miles of the race, and I made a mental note to save something for the end of the out-and-back course, reasoning the end of the race would be mostly uphill.

One very nice feature of the course was that it was 90% shaded, a much-needed perk on this very hot and humid morning.

To read the rest of the race report please go here:
https://meditationsinmotion.wordpress.com/2019/08/25/the-hellbender-half-marathon/