On Saturday, January 4 my hubby Bill and I traveled with our friend Nancy to R.B. Winter State Park in mid-state Pennsylvania to participate in CJ’s Resolution Challenge, a three-hour timed race to benefit autism awareness.

This was my fifth CJ’s, so you know I love the race, which is always held on the first Saturday in January.

This race is actually two events rolled into one. When registering, you can opt for the RC Revolutions Race or the Last Man (or Woman) Standing Race.

In the first option, racers run a 1.5-ish mile loop for three hours. The man/woman who completes the most loops wins the race. Pretty straightforward.

In the second option, participants run the first loop in 20 minutes, the second loop in 19 minutes, the third in 18 minutes, et cetera. The last man/woman to successfully complete the loop in the designated amount of time wins.

We chose the first option.

The loop is a mix of single-track trails filled with roots, rocks, and mud and gravel park roads.

The weather conditions at the seventh annual CJ’s were overcast skies, intermittent light drizzle, and hazy. The temperature hovered in the mid-forties, 45 degrees higher than the temperature at the beginning of the fifth CJ’s two years ago. You never know what the first week of January will bring in central Pennsylvania.
To read the rest of my review, please follow this link:
https://meditationsinmotion.wordpress.com/2020/01/09/resolutions-revolutions/

Link to this review
Login or sign up to leave a comment.
Laurie Hess recommends this race
(2019)
"Fast, Fun Freeze Up At Free Will" 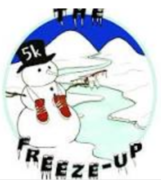 On Sunday my hubby Bill and I were joined by our youngest son Chris as we traveled to Perkasie, Pennsylvania for what I believe was our final race in 2019 – The Freeze-Up 5K. The race started and ended at the Free Will Brewing Company.

We arrived early, picked up our race packets, goodie bags (which included a kit to make your own hot chocolate, complete with marshmallows and candy canes), and nice, soft cotton long-sleeved race shirts from friendly volunteers in the Free Will Brewery, then checked out the tasting room and studied the course map.

Fifteen minutes before the race, we headed over to a paved path near the Perkiomen Creek to get our last-minute instructions from the race director: Follow the arrows; you can’t get lost.

Bill and I tried to start near the front of the pack. The path was fairly narrow and there was no chip timing. Race time began for everyone when the race director gave the starting signal.

The narrow path was really not an issue. As we began running on the scenic path near the creek, runners quickly spread out and I settled into a comfortably hard pace. The course was almost entirely flat, with only one road crossing where a policeman was on hand to stop traffic for the runners.

Link to this review
Login or sign up to leave a comment.
Laurie Hess recommends this race
(2019)
"The Challenge"

On Saturday, My hubby Bill and I traveled to Williamsport, a town about two hours north of us, to take part in the Williamsport Community Challenge trail race.

One intriguing feature of the race is that the race director changes each course every year, so even if you do the same distance two years in a row, you will not be running the same race. Another interesting feature is that you get to run on the Williamsport Water Authority property, a place usually off-limits to hikers, bikers, and runners.

15 minutes before the start we ambled over to the starting line (two orange cones set up on a dirt road), looked for our friend who was also doing the race, listened to the race director’s brief instructions (Follow the orange ribbons!), and were off.

The first part of the race was run on a dirt logging road. It was crowded with 400 runners and difficult to settle into a comfortable pace. We turned onto another, even rougher logging road at the half-mile mark and began climbing. And climbing.

To read the rest of the review, please click the following link: https://meditationsinmotion.wordpress.com/2019/11/10/the-challenge/

Link to this review
Login or sign up to leave a comment.
Laurie Hess recommends this race
(2019)
"Running With the Marines (In the Deluge)"

For the second year in a row, I traveled to Washington, D.C. on the last weekend in October to run the Marine Corps Marathon.

This year was different from last because this year I ran the race with my hubby Bill, my friend Nancy (it was her 99th marathon), and another friend Dennis. Dennis had run the Marine Corps Marathon 30 times before but not since 2007. He wanted to attempt to run it one last time at age 78.

I really like the race shirt this year. It is a black quarter-zip with the phrase “Courage is Endurance for One Moment More” emblazoned on the back.

Race day dawned gray and rainy, but we were prepared. We brought hats, throw-away shirts, and rain ponchos, which we donned before setting out for our 1-mile walk to the race start before sunrise.

In the Marine Corps Marathon, there are three checkpoints – at miles 17, 20, and 22. In order to beat the gauntlet at mile 17, you must maintain approximately a 15 minutes per mile pace.

The first few miles were good. We ran-walked and maintained an acceptible pace. Then we turned into Rock Creek Park. The rain, which had been light up until then, became much heavier and Dennis’ knees started acting up. He began to have trouble sustaining the necessary speed.

Link to this review
Login or sign up to leave a comment.
Laurie Hess recommends this race
(2019)
"Going the Distance"

Last Sunday my hubby Bill and I traveled to Forest City, Pennsylvania to run the D&H Distance Run, a half marathon.

We arrived at the trailhead on an overcast, cool race morning to pick up our race packets and were instructed by a volunteer to park in a nearby field. We parked and headed downhill to the pavillion, where we stood in a short line to receive our race bibs and T-shirts. The short-sleeved T-shirt was a soft poly-cotton mix, my favorite kind.

The starting line was actually on the road leading to the field where we parked, up the hill from the rail-trail, giving us a nice downhill start.

I liked the sound of that.

There were aid stations approximately every two miles. Bill and I decided to get a drink and walk through the aid stations. I was feeling fine until about mile four, when I began struggling again, just as I had done in a similar rail-trail half marathon (The Hellbender Half Marathon), which we had run three weeks before.

To read the rest of the report, please visit: