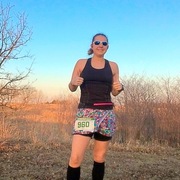 I had so much fun at the Leprechaun Chase 10K, in Ashland, NE!!! The reason this turned into such a fun event, I got to meet up with some great runners that I have connected with via social media. This was the first race that I got to run with them, and it was a blast. So below are my thoughts on the race and more about the race itself!

LEPRECHAUN CHASE® – A 10K RUN WITH A TWIST
The Leprechaun Chase® isn’t just a 10K with kilt-wearing bagpipers—this is a chase of lads versus lasses. The race kicks off with the lasses in the first wave, followed by the lads (5½ minutes later.) Whoever crosses the finish line first wins a free green beer for their gender. Who will it be this year? The pot o’ gold is in your court.

BY THE WAY, THE GIRLS TOOK IT THIS YEAR!!
The Course-
This is a beautiful course that starts at the Strategic Air Command Museum and goes through Mahoney State Park. You actually start the race in the hanger with the planes, which is very cool. That mixed with the beautiful scenery, makes this a race worth running! There was a mix of terrains, from grass, concrete, wood bridges. Though, I wouldn’t classify it as a trail race since the majority was street running.

Organization-
This race was so well organized. There was quite a bit of parking in many locations, along with shuttles running between the parking and the Museum where the race started. Pink Gorilla Events are always a great group, and run their races like fine tuned machines. There were also lots of water stations, and great post race snacks. It can be a little tight getting out of the park at the end of the race, but they had officers and volunteers stationed at intersections to help keep it moving.

Value-
This was a great value on a race. It was $38 when I entered, and I received a cup and shirt. I am also running the BRIN series to get the blackout medal for this series. Overall, this is a great race, with amazing atmosphere! I would suggest it to anyone that is looking for a fun March race.

Link to this review
Login or sign up to leave a comment.
Katherine Coffman recommends this race
(2017)
"Great for a New Runner!" 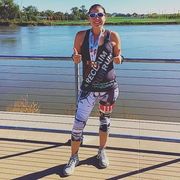 This was a great event, lots of downhill and a very cool run over the river from Nebraska to Iowa. Also ran through the historic downtown Omaha area, which is beautiful Finished with a finisher beer, great shirt and amazing medal. They also have so many water stations and restrooms on the route, it is great for a newbie!

Link to this review
Login or sign up to leave a comment.
Katherine Coffman recommends this race
(2017)
"An Amazing First Race" 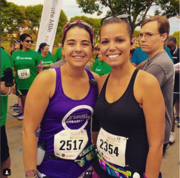 This was my first race ever! It was a great one, since the staff was so helpful. Packet Pickup was a breeze and the day of parking was a very large lot across the street. It was amazing to see the different survivors and strong people overcoming lung disease. This is truly a race for everyone, it doesn't matter if you walk the whole course or are the 1st place finisher, the crowd is amazing. You run through some very historic and beautiful parts of Omaha and into the UNO campus. With the finish being at Aksarben village where there are all the normal snacks, along with CUPCAKES!!!! This was a race that was near and dear to my heart, as my mother suffers from COPD.