Expo:
Little man and I came to KC Friday afternoon and played around at the expo. There was tons of snacks, a lot of people too be shy around, things to climb on, and tables to crawl under…basically a little boy’s dream playground (minus the slides). Gypsy Runner had some great shirts, headbands, hats, and everything a running lady would love to wear! The KC Running Co had some of their upcoming race medals out on display and some create tees for sale. The Ultramax team, same sponsor of the Go Girl Run KC I ran last fall, was there and heat pressing shirts:) Of course we had to look at all of the Garmin watches and play on the display!

EXPO OVERALL:
The Expo was nice! There was enough to see without being overwhelmed. There was clothes, fuel, massages (which I would have got one Friday since they were packed up and gone when I finished Saturday…), snacks for the little man, and several running related companies with great giveaways!

Marathon Morning:
As I was walking up to the start area, I was overtook by the greatness of the American flag – it was huge! I am overcome by emotions when I am in the presence of such an iconic representation of our freedom…I THEN got super excited and super nervous!

…and it was time to check my bag and find a port-a-potty, STAT! What about those potty lines!! **Disclaimer – when there are 3-4 port-a-potties are flagged off, DO NOT start a second line in the same group of potties!! ARG!!** Due to my poor selection of bathroom lines, I waited for 30 minutes as I watched people cut over to other lines (just as long as mine) and get through in 1/2 the time…that was when I realized that there was a second line started in the same group of potties I was standing in… WHAT?! So, I switched groups, was in and out of the bathroom in 5 minutes, and walked right into the moving group of runners starting the race…

The hills started from the beginning and we rolled up and down Ridgeview for the first 3 miles. There was one water stop around mile 2, but I didn’t stop. The first major turn was around the Mahaffie Farmstead area. There is a small tallgrass prairie reserve on the corner, a great visiter’s center, and land and buildings to walk through. Granted, we were not stopping to enjoy the area, but I did get a few quick snaps of the atmosphere.

Once we passed the Mahaffie area, we were on our way to Olathe North High School and there was a guy videoing the runners passing with a drone…odd, but cool! Soon, we were at the second water stop – I slowed to a fast walk, took a water, drank it, and was off running again soon after:) While I run in these areas when I am in town for races or visiting family and friends, I don’t generally take the time to really embrace the scenery… Not today. It seemed like my senses were on overdrive and I took in as much of the day as I could.

About this time, I passed the 4:30 marathon pacer. I mentioned to her that I was going to try and keep her in my sights… While that seemed like a doable goal around mile 4, I had no clue what I was getting myself into!

The rolling hills of Olathe were starting to show more and more. I ran with and past several people talking about how they didn’t anticipate the hills – I just laughed (silently)… Whenever I am in town, I run my hill workouts – I am not sure why locals would think that it is flat…

The rolling hills continued… Around mile 6, I could hear music coming up behind me… There was a gal with her phone on blast in her running belt. The music was similar to what I listen to and it had a nice beat for a good running cadence. I slightly quickened my pace to keep up with her for the next several miles. While I was still running faster than I anticipated to this point, we had a fun conversation about running, tri training, and life!

The Garmin 1/2 was her 2nd half from coming back from hip surgery…and she was clocking a new post-op PR! **Mental Note : I need to look through the images around the area where we broke away to check her bib # and see how she finished!

We broke away around mile 10 and I could hear her tell something about, “You’ll do awesome in the marathon! Great work marathon runners!” While I didn’t formally excuse myself, there were several other runners chatting it up with her and it was a natural feeling to just keep on running…

We rounded the corner of Olathe Northwest High School and another water stop. I walked through this area and took several cups of whatever they had to serve.

Around the mile 12 mark, the half marathoners continued to the finish and the full marathoners veered off to the left onto the Mill Creek trail system for 6.5 miles out and then back.

I am lumping the entire trail into 1 category because it was the beginning of the end!

My family was planning on being around mile 15 and 23 (the same spot). I got a call from my dad when I was around 14.5 miles in…good timing! They just settled in and were waiting on me. I tossed off my hydration pack to be refilled and took a bottle of water. Everyone was excited to see me, even the little man!

Once I was on my own again, my feet started hurting… I lasted until around mile 17/18 before I really had to take some walk breaks. My feet were on FIRE!! I hadn’t ever felt pain like this in my feet before and I wasn’t sure if it was just from the miles or if I had hurt myself somehow.

I pushed through, walking and running… I met some fellow first-timers along the way with similar aches and pains. We reveled in the fact that we were going to distance and joked about running a different course:)

I made my way back to where my family was and I fed off of their energy a little – I was beat, but the cold water and smiles helped a little!

The race maker must have had a good sense of humor, because no one liked him after the climb back to the main road…Once I was to this point, I knew I could make my way back to the start/FINISH!! There were only a few people on the path and road…and it was a lonely finish.

OVERALL:
I was very pleased with this race! I know that I was physically prepared for the course, but I was not prepared for the speed of the first 1/2 of the race. If I was only running the 1/2, I could have PR’d most likely! – this is not a good reality check, I should have started out much, much slower!

Link to this review
Login or sign up to leave a comment.
Lindsey McRoberts recommends this race
(2015)
"Beautiful scenery, no crowd support" 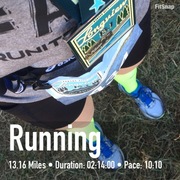 I was really looking forward to this race because of the beautiful scenery of Longview Lake. The race was along a highway and we didn't get to see much of the lake. There was a giant hill right after the first mile...and I ended up walking most of it so I didn't kill my legs. There were a couple miles that were along a trail and those views were good :) Due to the route being on a divided highway, there was little crowd support to break up the miles...much needed for a half marathon. The views over the bridge were amazing and I wish more of the race was along the paths and trails than the highway. There was more to be desired with the aid stations...but in the cooler months, less is okay. The finishers area was nice with milk, chicken noodle soup, and massages. I was glad to get my sweatpants and warm up in the car before heading out.

Link to this review
Login or sign up to leave a comment.
Lindsey McRoberts recommends this race
(2015)
"Hot Day, Hot Race" 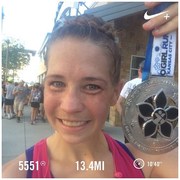 This race wasn't a bad race...it was just a hot, hot day! The information before the race stated that there would be GU and water at "every aid station" but there was no GU to be found until mile 6...I was not prepared for that! Since this race, I bring as much fuel as I think I will need and do not rely on the course to have any... The shirt, medal, and post-race food made up for the lack of motivation along the course. The scenery along the trail was nice and the shade was a welcome sight. The roads were not shaded and hot...and not a whole lot of "entertainment" along the course.

Link to this review
Login or sign up to leave a comment.
Lindsey McRoberts recommends this race
(2015)
"Great first 1/2 marathon"

Overall, I loved this race!...but there was a lot to improve upon. The mostly downhill course was great for my first half marathon experience, but the help of pacers would have kept me from killing my legs on the downhill around mile 5-7... There was no "expo" of sorts, but the running company is always a welcoming atmosphere. The tech shirt and metal were great! The aid stations were well prepped and the volunteers were easy to spot along the way. Due to the course being point-to-point, you had to catch a bus before the race to take you to the start area. At the finish, there were no refreshments other than water due to the management not being well prepared. We were assured that future races would be more fully stocked (so we will see how it goes this year in a couple weeks!). The post race area was nice with engravers, massages, recovery drinks, and an easy drop-off bag pickup.