Calvin Coolidge called Vermont "this brave little state," and the quote is now inscribed in marble at the Vermont State House. This race is brave, for offering up a challenging course and being proud of it. For now, it's a relatively small race, but if organization, scenery and a truly memorable experience count for anything in our running world, then it won't stay small. The Half Marathon and Relay insure that it's never lonely along the course, and the volunteers at the Aid Stations are incredibly supportive and kind. I was working out a cramp and walked the first half of the marathon, so I had the opportunity to experience a lot of time on the course. If you are going to walk a course, this is one to select, as the views and the people will buoy your soul and your spirits. Loved this one and really hope I can go back, even though it's a bit of trek from Florida.
The town is lovely, the race is less than an hour drive from Burlington, if you need to fly in to Vermont, and packet pickup/getting to and from the race couldn't have been easier. The RD is as special as everyone says she is, and really does wait at the finish to greet every participant. If a race can be charming, then this one is it.

Link to this review
Login or sign up to leave a comment.
Amy recommends this race
(2016)
"Lambeau Field" 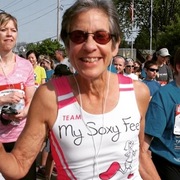 I was in Green Bay to run the marathon Sunday. Decided to run the 5K the day before. So glad I did! The race focuses on kids. Lots of school buses from all over with young runners, and everyone gets a medal. Super well organized, with starting carrels, folks all along the course, and lots of food afterwards. And just like the marathon and the half on Sunday, this 5K includes a run through Lambeau right before the finish. Stands are open for friends and fans.
If you're not running the longer races Sunday, or if are and want an organized 3 miler Saturday, go run this one. It was fun!

Link to this review
Login or sign up to leave a comment.
Amy recommends this race
(2016)
"Aptly Named: a run designed by and for runners!"

This was my 130th marathon when I ran it in 2014. I went back and ran it again in 2015 and 2016. Needless to say, I rank it top tier of marathons. That is due to all the attention to detail that only other runners appreciate. There were plenty of aid stations as well as volunteers along the course, and they were superb. Dedicated doesn't begin to describe them. As is the case, we had some challenging weather one year (2014) and the volunteers were unbelievable. They kept us going.
The warm building before and after, hot food and drinks, great awards and again, absolutely fabulous volunteers who are on top of everything make this a exceptional marathon. Honestly, the food afterwards is exceptional in terms of selection and tastiness.
The relay has added some additional spirit and pep. The teams are fun to run with and they cheer us on as well. Makes it something to anticipate as you go from post to post. A lot of the race is on a beautiful bike path, and what is on the road is well marked and safe. Not a lot of swag as this isn't a corporate sponsored race. The shirt is one of my favorites: well made, fits well, and doesn't have advertising all over it. Understated and classy, just like the race.
Reston is a lovely town. Fly into Dulles, it's right there. Lots of art galleries, lakes, restaurants--good time for runners and families.

Link to this review
Login or sign up to leave a comment.
Amy recommends this race
(2016)
"Already a Community Favorite"

I ran this 5K the day before the Boston Marathon. Created by the Watertown Police, the idea behind it is that the police had to lock down Watertown in the wake of the 2013 Marathon bombings, as the remaining bomber was eventually captured in Watertown. Feeling strongly that curtailing residents' freedom is not why police officers become officers of the peace, the Police Supervisors’ Association decided to commemorate the anniversary of the events that led to the capture of the Boston Marathon bombing suspects by inviting the community to fill the streets of Watertown in a celebratory 5K road race and walk. Having followed the horrifying events of 2013, as did most runners, being able to run with abandon through the Watertown streets was incredibly moving. I cannot recommend this one enough.

Watertown is an old New England city, so the course includes some rolling terrain. And the streets have potholes--it's what you expect after winter in Massachusetts, so look sharp!

Some other police officers from neighboring areas participate, and the pre-race ceremonies are appropriately respectful in remembering the victims.

Link to this review
Login or sign up to leave a comment.
Amy recommends this race
(2016)
"Family Fun"

I've run this race at least four times as I live in Ft. Myers. When I was awaiting the hotel bus after a recent marathon in another part of Florida, two ladies asked me about this half marathon. They were interested, but were a little hesitant because of the name. I want to write this to assure everyone this is a solid race that everyone can enjoy. Several of my friends with children run the relay with them. Sure, there are Hooters waitresses at the finish line party, and beer is served. The young women have on lots more clothing than most people you can see at the beach: shirts and shorts. The beer is kept in a roped-off area and they check who they are serving carefully.

The proceeds go to one of our local hospitals. Hooters sponsors it; originally, the course was between the Fort Myers Beach Hooters and the Cleveland Ave Hooters, hence the name. Now the beach one is not involved; the course includes scenic McGregor Blvd, where Thomas Alva Edison wintered and planted some beautiful palm trees, and an out and back over the Caloosahatchee River.

Lots of town folks turn out for this one, so there is decent crowd support. The finish line party is worth sticking around for, especially if you are a wings fan. There is a lot of more traditional post race food as well, and the volunteers are outstanding. Shirts are gender specific and nice enough to wear on a weekend, if you wear your race shirts for casual wear.