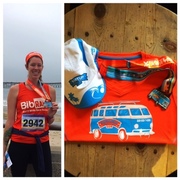 I ran the 5K of the Ventura Marathon races and everything about the process from registration to packet pick-up to the actual race went very smoothly.
The expo was a decent size, and was all outdoors. There was a variety of vendors from Jamba Juice to other races to clothing. The expo turned into the after-party, too, with a live band (that was pretty good!). It was right across the bike path from the beach next to the pier, so there were tons of photo opps and you could go to the water if you wanted to. And the race swag was great! A reusable shopping bag, a hat, a tech tee, and all kinds of goodies (kettle popcorn, ClifBar, etc.). were included!
On race morning, I stayed at a hotel within a mile from the start, so parking wasn't an issue, but it was a little tricky to find parking on the expo day and there wasn't any parking at the venue. I like parking farther away because it's a great warm-up, but I know some people like to be *right* there.
The marathon started first, and then the half and 5K started about 10-20 minutes late, but it wasn't that big of a deal. The announcer kept us updated the whole time, so we were never wondering what was going on.
The course itself was mostly pavement and pretty flat. There were a couple very gradual hills, but you got to go down them as well, so it evened out. I was a little disappointed that the course didn't really have much of a view of the ocean. I thought it was going to be more along the bike path along the beach, but it was on the road that was further away. Then it went into a residential area. It was nice because it started and finished right near the pier and the water, and Ventura itself is a cute little town, but the course wasn't anything super special.
The first aid station was about a mile in, so we hit it twice with the 5K. The volunteers at the aid station, and throughout the venue (at the finish line, packet pick-up, etc.) were great! They were enthusiastic, friendly, and helpful. There were a few groups from high schools, and the kids did an amazing job. I was impressed.
Overall, I wouldn't necessarily call this a race worth traveling to, unless you tied it into a longer trip (like I did). In that case, or if you are a local, I highly recommend checking out the Ventura race next year! It's also a race that you could definitely PR in.

Link to this review
Login or sign up to leave a comment.
Abbie recommends this race
(2016)
"Great spring race to kick off the running season!" 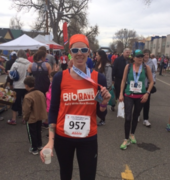 This was my first year running the Platte River Half Marathon, and I was impressed! The week leading up to the race, there was an email sent out letting the runners know to check the website for final race instructions, which was a good reminder. They offered three different packet pick-up days (Friday or Saturday at Runner's Roost, Sunday at the race) and had representatives from Honey Stinger giving out samples. The process was simple and easy! The long-sleeved race t-shirt is nice, but for the spring, I'd prefer a t-shirt.

The day of the race, it was really easy to find parking. There were two bigger lots, but we chose a street spot that was only a block away so my boyfriend could drive over to the finish. He didn't have any trouble finding a spot within a couple blocks of the finish line, either. There were a ton of Port-a-Potties near the start line, so the bathroom line moved quickly.

The race started in five waves, which helped us get a bit spread out and it wasn't as packed as it usually is when you have 1500+ runners starting at once. The beginning of the course ran around town and then headed out to the Platte River Trail. It was a cool, cloudy day, so it was perfect racing temps!

The Platte River Trail has some dirt and gravel, but is mostly paved. There are some small uphill/downhills underneath roads, but overall it's mostly flat and scenic along the river. Around mile 12.5, there is quite a hill going up and over an overpass, but the perk is that you get to come downhill and then cruise around a corner to the finish line.

At the finish line, I got a big medal and *another* swag bag with a glass and a bottle opener. There was plenty of water and signage so I knew where to go to find the expo. It was a couple blocks down the road, but again, easy to find. At the expo were plenty of samples of nuun, Noosa yogurt, Skinny Pop popcorn, and a few others. There was beer and food as promised (hot dogs, burgers, mac & cheese). The expo was right next to the RTD station, which was the way back to the start line where most people parked, but as I mentioned above, my boyfriend picked me up, so I didn't experience that. Runners were supposed to be able to ride the RTD back for free.

Overall, this was a well-organized race, a lovely course at a great time of the year, and I highly recommend it! 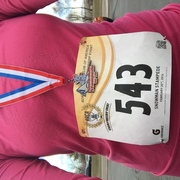 I ran the 10-mile race at the Snowman Stampede, and when I arrived, the 5-mile race was already underway. There was plenty of parking across the street near the college, but I had to park in one of the farther lots because of the 5-mile runners. It took 5-10 minutes to walk to the race area, but it was a nice warm-up. I picked up my packet the day of, and it was a very easy process.

This is the same course that Colorado Runner Events uses for all of it's Winter Distance Series races, but I enjoyed it. It was an out-and-back, but out was one side of the river and back was on the other side, so while some of the course overlapped, it wasn't completely out-and-back on the same route. The course is on a bike trail, so there were occasional other runners and cyclists, but there was room for everyone. There is also dirt next to the bike path in many sections, so I was able to run about 50% of it on dirt, which was really nice.

The course goes over bridges and under roads, so there are some minor hills. Towards the end, there is a pretty steep (super short) hill with a hairpin turn, and then a short uphill before the finish line. There are a few gradual uphills as well. You pretty much follow the river the entire way, which makes for some decent scenery. The other side is the highway and there were a couple sections near construction sites. The course was pretty well marked - my Garmin said I had completed 10.06 miles when I was done, which is pretty close.

I was surprised that the first aid station wasn't until after the second mile, but the volunteers were great and each aid station had both Gatorade and water. Post-race, there was more water and Gatorade, as well as bananas, oranges, bagels, and muffins.

The expo had a nice assortment of vendors - Colorado Runner mag, Noosa yogurt, Runner's Roost, and a couple local businesses. The swag bag came with a short-sleeved shirt, an issue of Colorado Runner magazine, and some other samples and coupons from the vendors.

Overall, it was a well-marked, easy to follow course and well put together. I'd recommend it! And maybe you'll get as lucky as we did with 60 degree weather in February! :)

Login or sign up to leave a comment.
Abbie recommends this race
(2015)
"A 5K and a Soccer Game"

The only reason I recommend this race is because you got a race and a ticket to the Colorado Rapids soccer game for the price of a regular race.

It was the first year for this race, so I'm hoping that's why things were a bit disorganized, but at one point the announcer told us the race would be starting late because they had an event earlier that day and were still marking our course. They also told us they were running out of safety pins, so please just take two. They also ran out of the promotional soccer balls that some people paid extra for. We didn't have to show our IDs for our bibs, and there was no chip timing. Because the race included a ticket to the Rapids race, it started at 3 p.m. and was HOT!

There was wet, icy towels at the finish line, which definitely helped, and there were 2 aid stations.

Overall, it wasn't a great experience, but was a pretty easy course that was part trail/part pavement. Parking was also easy.

Link to this review
Login or sign up to leave a comment.
Abbie recommends this race
(2015)
"Spring Fever 5K: A Well-Organized Race"

The Spring Fever race is put on by All-Out Multipro Productions, which is known in the area for well-organized races. There is no pre-race expo, but there is pre-race packet pick-up, and an expo on-site on race day. There was plenty of parking at the venue, and near the start line, which is helpful.

The race course has some nice scenery and runs out by the Blunn Reservoir. There's about a half mile hill that you run up on the way back, and a hairpin turn at the turnaround, so I don't know that it's a great course for a PR, but not bad overall. The aid station was placed so that you hit it twice in the 5K.

Swag includes a medal, a tech t-shirt, free race pictures, a post-race meal (burritos, bagels, fruit, water, milk). There was also a really great raffle afterwards and most, if not all, athletes that stuck around went home with a prize.