Seriously...how difficult is it to put mile markers in the right spot?! The past two years both mile markers 1 and 2 have been off. Maybe they assume people have gotten use to the incorrect locations and don't want to throw everyone off by moving them to the correct spots?

If your company is doing this race, it's definitely worth participating as it's a great social time. However, don't expect much from the course itself. Oh, and if you want a small shirt, you better grab yours before the start - they've run out of those both years as well.

Link to this review
Login or sign up to leave a comment.
Eric recommends this race
(2015)
"A Quality Fleet Feet Signature Race"

A nicely executed race despite the large size and narrow lakefront path. A few things to know:
-If you're fast, get into the fastest corral you can get into
-Corrals close 15 min prior to race start and are enforced (not really sure if this is extremely necessary)
-The 2nd half is on the "standard" lakefront path heading north

Link to this review
Login or sign up to leave a comment.
Eric recommends this race
(2015)
"Solid Spring Marathon Option" 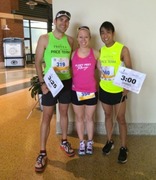 This was my first time with the new course layout - huge improvement from the past! Love heading north along the river trail for the bread and butter miles. Aid stations were good - they even had 3 gel stations along the way!

Only downside is the weather - you take a gamble with late May in Wisconsin. 2015 was warm, humid, and windy.

Logistics were all great (parking, prerace, etc.). They have post-race beer, chocolate milk, and brats. Great pace teams as well for the size of the marathon.

Link to this review
Login or sign up to leave a comment.
Eric recommends this race
(2015)
"It's Boston" 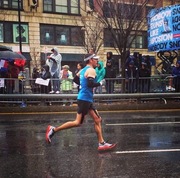 Not much to say here - it's Boston, if you get the chance to run, you should. Also, highly recommend Fleet Feet Sports' Boston365 program! It was a bit rainy and windy in 2015, but can't control the weather. More details on my race experience here:
http://www.baumtempleofspeed.blogspot.com/2015/05/boston-sub-3-achieved.html

Link to this review
Login or sign up to leave a comment.
(2014)
"Starts ahead of schedule, don't expect course to be free of snow"

As it's a "hometown" race, it's a shame to leave 1 star, but I need to be honest and unbiased. The registration cost is only $30, so that's very reasonable. The course is also downtown Appleton starting on College Ave, which is also a nice touch and you can hang out in the Paper Valley hotel beforehand to stay warm. Here's where it turns poor though. My friend and I went out for a warm-up run - we both know the area well so we ventured a bit north and east coming back through the Lawrence campus. Coming back down College, we could hear the national anthem on the loud speaker, which was a bit odd (it was only 7:52 am and a posted 8:00 am start time). We assumed there must be some announcements coming as we hustled the best we could through the crowd. Nope...national anthem finished at 7:55, followed by a 10 second countdown to the start. First time I've ever seen a race start 5 min early - not cool.

Appleton had gotten quite a bit of snow in the previous week and a light dusting the night of the race. However, the roads were not as clear as what you would expect. If you were running on the crown of the road, maybe you were good. But the sides still had a bunch of packed snow...especially around corners, which makes it difficult and more dangerous than it needs to be for running the tangent. To me, it seemed like they had run a pull down the center one time and called it good. It wasn't awful, just something that you'd expect to be done better given the size of the race.

Run at your own discretion - I'd advise keeping your warmup in front of the start corral and be ready for the course not to be cleared all that well.