Cassie recommends this race
(2016)
"One of the top half marathons I've ever participated in!" 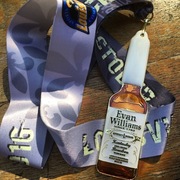 *I ran this race as a BibRavePro and received a free entry.
This was my first year participating in the Urban Bourbon Half Marathon and it definitely won't be my last. Even in the months leading up to the race the race director, Michael, was super personable, interested in our training, and focused on making sure every participant has the best experience. This is exactly what makes a race amazing, if you ask me.
The expo was at the Louisville Slugger Stadium and it was absolutely beautiful. Packet pick-up was easy and you were able to exchange shirts if they didn't fit. There were minimal vendors which I actually appreciated. There was a strong focus on the bourbon tasting and Fleet Feet. The line at the Fleet Feet booth was really long and didn't move particularly fast, but that was the only thing that was tough about packet pick-up.
The morning of the race I was able to find parking in a garage nearby for a small fee and was able to easily find the start line. The gear check was easy and efficient.
The course was absolutely beautiful and the great race management made it all go so flawlessly. I loved that there was entertainment throughout and the course really shows off what a great place Louisville is. I forgot my headphones that morning but I didn't even notice! The aid stations were adequately spaced and had water + powerade and plenty of amazing volunteers. The finish line was complete with water, powerade, heat blankets, bananas, and bagels- yum! And the finisher medal was amazing- a hand-dripped bourbon bottle!
I have to admit that my favorite part might have been the after-party. Our wrist bands allowed each participant to get pizza, a Kentucky style soup/chili, a large beer, and 3 or 4 bourbon tastings. This in itself is worth the registration price! There was free entertainment and plenty of space to hangout. I HIGHLY recommend this race!

I really loved this race. The expo wasn't anything particularly special but it was still pretty great. I loved that we got long-sleeved shirts and power gels (especially considering I forgot mine at home). There were plenty of local running companies and other product reps there but it was still easy to get in and out quickly if you need to. It was also fairly easy to access considering the expo was in downtown KC. The parking on race day was really straightforward and we had no problem finding a parking space the morning of the race. The race itself was great. It is known for being really hilly and it surely did not disappoint. The scenery was lovely and I really enjoyed the entertainment along the route. The weather could not have been more perfect. I loved that afterwards there were TONS of snacks (seriously, like bananas, crackers, ice cream, milk, etc., etc.,) as well as free coffee and BEER! The atmosphere of this race was also really great. Overall, a great run.

Also, shoutout to the wonderful police officers who helped with road closures and traffic control! The best.

I HIGHLY recommend this race and hope to be returning again next year!

Link to this review
Login or sign up to leave a comment.
Cassie recommends this race
(2016)
"UR fully worth the experience! " 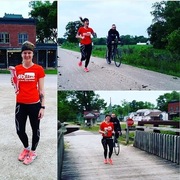 I ran two stages of the United Relay in Missouri. This was a little different than most races, so I'm struggling with how to do this review justice. However, the registration and fundraising parts of the race were really easy to use and straightforward. I loved that you could choose which charity to run for and my friends/family said it was really easy to donate.

Leading up to the race, James was really great about answering questions I had and addressing some concerns (like running late at night and transportation). He was quick to make accommodations for me so that I would feel comfortable and prepared.

I know some people felt confused and uninformed about their stages but this really was not my experience. James was great and the red team leaders (shoutout to Richard Reed and Ben Conway!) were wonderful. For both stages they were constantly asking me what I needed, meeting me along the way to cheer me on, and generally just being positive and friendly. There were no aid stations but upon finishing my second stage they had gatorade waiting in the car for me and it was exactly what I needed. They definitely made this experience a great one for me (and my husband who rode his bike alongside me) and I felt fully supported. They let me try some Aftershockz headphones and even keep them at the end! I was pretty excited about that.

Overall, I felt this was a once in a lifetime experience and I am so glad I was able to be a part of it!

Link to this review
Login or sign up to leave a comment.
Cassie recommends this race
(2016)
"Most Beautiful Race in the Country!"

I'm a Northern Arizona native, so being able to return back home and run this beautiful race was such a treat. We came up late the night before the race and stayed the night in town. The next morning, it was really easy to get to packet pick-up thanks to the free shuttle service that stopped right outside our hotel (Sedona Rouge- always a favorite!). We quickly found our bibs and race tees (which were perfect!) and dropped our things at gear check.

We had about an hour to waste before the race so we enjoyed the scenery, checked out the booths, and used the restroom. There were plenty of restrooms on site, which is always great!

The race started on time and although it was a later start time than most races (9:20am), I appreciated that the day was a bit warmer by this point. The majority of the course is hilly and you can't forget the elevation of Sedona, so that was a fun challenge. The race is out and back. I felt like the turnaround was pretty well marked, but a friend of mine did miss the turnaround, so maybe not. The aid stations were adequate with plenty of water, electrolytes, GU, and bananas. One stop even had a dancing gorilla, so that's fun! The finish looks like it's on an uphill, but it's not actually- that was a relief. The finisher medals were really nice and definitely representative of the race.

Overall, a pretty stellar run that I'm really happy to have had the opportunity to race in. I will definitely be returning in future years!

Login or sign up to leave a comment.
Cassie recommends this race
(2015)
"Tulsa Run for the Win!"

The Tulsa Run was a great experience. From the expo to the gear to the post-race snacks, this race took great care of the runners involved. It was so fun to see everyone dressed up in costume for the race. The race was hilly in the sense that it had rolling hills but the grade of the hills were manageable. There was great scenery, great traffic control, and even great entertainment throughout the race. I would highly recommend this race to others looking for a run in the Tulsa area! We event got to meet Heath, the race director, and he was so positive and excited- it was hard not to feed off his energy!