This is the first year for the Mark Wood Memorial 5K. It was a great race. A small out and back along the San Antonio River Walk made for great scenery. I was worried about the space on the River Walk with traffic going two ways, but it worked out perfectly. The race coordinators were hired locally and did a great job with the course and aid stations. I will definitely be participating again next year!

Link to this review
Login or sign up to leave a comment.
Cassie recommends this race
(2015)
"A Tough Course but Great Event!"

As always, the race management was great. I loved that this race had a bigger expo compared to Ultramax's other events. The swag was awesome: race shirt (mine was pretty large, sadly), a wine glass, finisher medal, and headband! There were aid stations every 1.5-2miles and they were easy to access. The scenery among the MKT trail where most of the race takes place is some of the best in Columbia. The elevation was unexpected a quite a challenge, not to mention it was raining the majority of the race. Sadly, I did not train well for the elevation which resulted in my worst half marathon time. That being said, part of that was lack of my own preparation, but this elevation is tough (coming from a gal that used to run at 7,000ft in the mountainous Flagstaff, Arizona). The parking and access was great. As I have said before- a great local race!

Link to this review
Login or sign up to leave a comment.
Cassie recommends this race
(2015)
"TriZou is a great Midwest Tri" 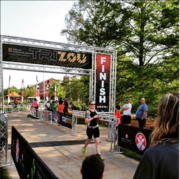 This was my first year racing at TriZou. As always, I appreciate the affordable pricing and practical swag (tech shirt and pint glass). It was a 400m swim, 14mi bike (two 7mi loops), and a 3 mile run. It all took place on and around the MIZZOU campus which created an exciting atmosphere. People came from all over to participate. The swim was a serpentine course, which meant participants were staggered by 5 second intervals, which made the wait quite long depending on your estimated swim time. The transition area was set up around the track which actually made it quite easy to navigate. Not to mention there was little congestion due to the staggered starts. The bike loop was scenic with a good number of hills and GREAT bike lanes/traffic control. It felt safe and there was plenty of room to pass other participants. The run was a little odd (some sections had gravel), but the markings and volunteers helped to make it more straightforward. I appreciated the aid stations as well. Overall, another great local race by Ultramax Sports.

Link to this review
Login or sign up to leave a comment.
Cassie recommends this race
(2015)
"A lovely local duathlon!"

This was my first year doing the duathlon and I'm so glad I did. I participated in the long-course (1.5 run, 15 bike, 3 mile run). The race site was really accessible and was located in a quiet neighborhood with little to no traffic. The run distances were laps of the same route, and the bike route was two laps of the same route. Although the streets were not closed for the race, there were plenty of volunteers and police officers at each intersection and turn to make the race feel safe and well-marked. Unfortunately, we had some frost the morning of the race so the transition area (which was grass) was incredibly muddy and wet. Besides this, I really enjoyed the race and again Ultramax did an awesome job putting it on!

Link to this review
Login or sign up to leave a comment.
Cassie recommends this race
(2015)
"First ShamRox in Columbia-Area was a HIT"

I was honored to be a part of the first ShamRox in the Columbia-area. Ultramax, Columbia's local running shop, hosts the race. I cannot say enough good things about the company and the race coordinators specifically. A large portion (miles 2-9) take place on the scenic Katy Trail along the Missouri River. We have been having some pretty bad weather (6 inches of snow a week before the race) but luckily temperatures raised significantly for race day. I was initially concerned about the condition of the trail but was pleasantly surprised when there was almost no mud. There was actually some ice left but it was easy to get through. The course has a steep decline for the first 1.25 miles and then the elevation stays flat the entire time you are on the trail. The final quarter mile of the race, you climb a STEEP trail. This was the only part of the trail that was muddy. Even seasoned runners weren't able to run up the entire incline.

The whole atmosphere of the race was a blast. All finishers got a shirt and pint glass. The overall and division finishers got QUALITY medals. I placed first in my age group and was really shocked by how great the medals were- definitely a VERY high quality compared to previous races I have been a part of. The run finishes at the local winery which offered great food and drinks (plus free beer for finishers), a spectacular view of the Missouri River, and live entertainment.

The only negative thing I have to say about the race is related to the parking conditions. With the snow melt, the race coordinators had to make a last minute decision to park cars off-site (about a quarter of a mile or so away from the start line). This meant a bus had to shuttle runners in. This resulted in a 10 minute start delay (as many runners were unaware of the change and did not allow enough time to be shuttled). Further, we were told the bus would run all day, but when we went to leave around 11:30am (immediately after awards), it was nowhere to be seen. This resulted in people having to walk back to their cars.

I highly recommend this race and will definitely be participating again.