Michael Clemons recommends this race
(2019)
"Houston, we have a PR"

The Houston Marathon team put on one hell of a race. From beginning to end, it was a great experience.
Pre-Race: The emails and social media posts from the race were perfect--just enough detail without being overbearing, answered any question I may have had. The expo was smooth and easy, with a lot of vendors and activations from sponsors.
Race: A perfect course for a PR! Even though it was cold, so many fast times were ran in 2019 (including a 5:30 PR from me!). The Start Line had plenty of port-a-potties, was easy to get to from the convention center. The course had an abundance of volunteers (all friendly) and water stops, great scenery, entertainment, and safe roads.
Post-race: After you cross the finish, you're ushered right into the convention center where they have post-race refuel food and gear check. Not only do you get a sweet medal, but they also give you another finisher's shirt and a mug. It's a lot of great swag. Plus, some great food from H-E-B.
If you're looking for a fast, fun race in Texas, Houston is where it's at! 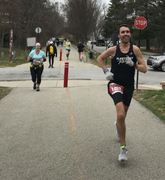 This is the second time I've done the Carmel Marathon, and both times it has been a great experience. From beginning to end, the race organizers did a great job of making the race unforgettable. They moved this year's race up a couple of weeks, which helped with weather (it was 70-80 degrees when I ran it in 2016, much cooler this year) and increased overall participation. Hopefully this race continues to grow!

Pre-race--Between pre-race emails and social media posts, the race organizers were on top of things. There weren't any questions I had that went unanswered, and they were very responsive to the questions of others on social media. The expo was in a different location this year, and it made parking and access easier. Also, I was an expo vendor for my company and they treated the vendors better than just about any other race expo I've been to. Kudos for that.

Race swag--The shirt wasn't my cup of tea, but it was cool how they allowed participants to vote on the design back in the fall. They also gave out drawstring bags that worked as gear check bags.

Race Morning--It was super easy to get to the race start and get parked, free and only about a quarter-mile to the start. It was easy to hear announcements, and things seemed to flow smoothly. There were some longer lines for the port-a-pots, so they could've used a few more. But that's always the case, always port-a-pot lines before a race no matter how many there are.

Course--The course was new this year, with the full and half running together all the way through the finish line (the marathoners kept going to the left of the finish line while the half runners finished). It made it a nice little crowd at the beginning, but nothing unmanageable. Course support was great, with plenty of aid stations and water and Powerade easily differentiated. The water did taste a little funky though. There were a few smaller hills, but for anyone used to running hills, it wasn't bad at all. Like, as flat as you could hope without being boring. You did have to run through a lot of roundabouts, but that's Carmel for you. The Monon Trail is great, but got a little isolated after the 13.1 point where the half finished. I was able to set a huge PR in the race though, which is always a plus.

Post-race--There were plenty of volunteers handing out water, chocolate milk, donuts, and a bag with snacks in it. You could get a printout of your results, which is always nice. There were also some vendors selling food, and free pancakes from First Watch and free beer and wine in the beer garden. One thing I wish they had was a step and repeat for pictures. It was a pretty windy though, so it may have been there earlier and just had to be taken down because of the wind.

All in all, I had a great Carmel Marathon experience and would highly recommend it. The Race Director, Todd Oliver, and his crew at the Carmel Road Racing Group put on a top-notch event!

Link to this review
Login or sign up to leave a comment.
Michael Clemons recommends this race
(2018)
"Great experience, with a PR on top!" 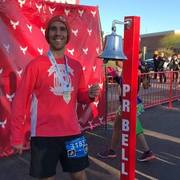 Let me start this off by saying a big kudos to the race organizers for putting on a great race. I left race weekend not only happy with my running, but happy with the overall experience. We lucked out with the perfect weather, too.

Pre-Race--Email communications were detailed, and even though I was a little unsure how packet pick-up would work in the big Riverview complex, it went very smoothly. The expo was partly outdoors and partly under a big tent, with not too many vendors. But, the vendors that were there were good about doing some type of activation and not just hassling you to buy something.

Shirts--I applaud them from trying something a little different than the normal race shirt, but the mesh see-through material isn't my favorite. I like that the shirt isn't cluttered with sponsor logos, what I like to call Logo Soup. Plus, it was cool that the shirts were custom-branded with the race logo as the shirt label.

Race Morning--Traffic is probably the biggest ding for the race. No matter what you do, it's tough to get thousands of people into one small space in a short window of time. Traffic was backed up on the interstate for a few miles, but I was able to go to the next exit and weave my way around to a quick entrance. One you're parked, the bus ride is easy and they had plenty of big heaters at the start to keep you warm.

Course--The race started when it was still dark out (6a mountain time), which was a little strange. But it was cool that they shot off fireworks at the start. You did a lot of turning, but none of the roads were narrow so there weren't any issues there. Plus, plenty of aid stations and great volunteers! It was also cool to have Clif gels and activation. But the best part of the course was the downhill elevation. It was very gradual, but downhill the entire way. Like, I don't remember a single uphill. So fast. And, the competition was super fast, which led to a 1+ minute PR for me.

Post-Race: Once you cross the finish, the food flows. Super tasty French toast, Chick-fil-a sandwiches & yogurt, popsicles, chocolate milk, and more. It was awesome. And even though most of the 10K runners had finished, it wasn't too crowded. There were plenty of backdrops for photos, and plenty of space to spread out. I was even able to get a free post-race massage. And the exit from Riverview was much much easier than the entrance.

I would highly recommend this race to anyone looking for a fast, fun race in a cool city.

Link to this review
Login or sign up to leave a comment.
Michael Clemons recommends this race
(2017)
"Great race, brutal downhill!"

As a runner from Kentucky, I was concerned about this race going in because of the high start elevation (nearly 9,000 ft) and the downhill drop (drops almost 4,000 ft). I trained through humidity, did downhill repeats, and added daily squats to my training. Let me tell you--none of that helped. The course kicked my butt, and three days later I can barely walk.

PROS:
- Amazing views. Seriously, awesome. You can't beat the race views.
- Small enough race that you're not jam-packed but big enough that you have others to run with.
- Easy navigation on race morning. Parking and bussing to the start line from the park by the finish line was very simple.
- Good water stops and race support. Every 2ish miles they had water and Gatorade, and the later ones had Gu and snacks. People were also friendly at the stops.
- Even though the road wasn't closed, I never felt unsafe.
- Quick post-race results printout available, and the awards were cool too.

CONS:
- The downhill is great for running fast, but also a leg crusher. If you're prepared for it and used to running downhill, it's not a con. But my prep still didn't get me ready for this intensity (you know it's bad when the overall winners are even hobbling up to get their awards).
- Would've loved a post-race beer. But alas, it's Utah.
- The T-shirt wasn't anything special.
- The "expo" was weak. You picked up your packet at a Gold's Gym in Ogden. They had some race merch for sale, and some vendors. But the vendors looked so lonely--I don't think the race was big enough to warrant vendors at PPU.