I was coming from several hours away, so I was not familiar with the terrain at all before showing up race day to the Trail Mix event. It was a warm, muggy, morning, but the excitement was in the air right when I parked my car. Parking was only a couple yards away from the start of the race, which always makes life easier when having packet pickup on race day.
Packet Pickup was smooth and easy. I received an envelope with my bib, a gu, KT tape, and then they handed me a really nice soft tshirt. There were also about 10 different vendor tents scattered around giving away free things like towels, water bottles, nuun tabs...and many more that I didn't have the chance to visit.
The event was split between a 50k, 25k, and a 50k relay. Each event started at a different time. I was fortunate to run the 25k, which was 2 loops of a 7.7 mile route. At the Start/Finish area, there was a tarp spread out so you could leave a drop bag, especially for the 50k runners.
The race was very scenic and not overly technical, which would make it perfect for a 1st time trail race for someone. This race had consistent rolling hills throughout the entire course. The ground was mainly grass covered double track, with a few areas of crushed limestone. The route goes between forested areas, prairies, and around several small lakes. The scenery was always changing and very beautiful.
Another thing to note on this race is the amazing volunteers. They were walking around throughout the trails with red shirts on, carrying emergency kits and water. This was especially helpful on such a hot day. They cheered for everyone running and even cracked a few jokes to the runners along the way. The aid stations were fully stocked with water, Powerade, potatoes and salt, trail mix (because you have to when the race is called Trail Mix), and a few other things.
When I finished, I received a very nice medal and a free meal. I was only interested in the chicken noodle soup. The one down fall is you had to pay for your own beer. The race results were posted on a board about a half hour after I finished.

I would definitely run this race again and I highly recommend this race if you are interested in trying out a trail race!

Link to this review
Login or sign up to leave a comment.
Lisa Dretske recommends this race
(2016)
"Can't fight the weather" 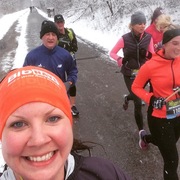 I was asked to pace the 2:05 group for the Brew City Half Marathon. This was the first year for this event in Milwaukee, so I wasn't expecting perfection. To start, I arrived early and since it's April in Wisconsin, any type of weather is possible. The day of the race had 20-30 mph winds and snow/sleet. Not ideal, but not completely out of the ordinary. Luckily parking was very easy, and I only had to walk about 5 minutes to get to the start area.

Everyone lined up about 10 minutes before the start of the race and they had suggested pace starting areas to better organize the start shoot. Originally the course was going to be 2 loops and the 10k racers would only do 1 loop. A week before the event, the race director changed this to more of a down-and-back style race. The race map looked like a cursive Y shape and had several turn around points, which wasn't easy in the ice and snow.
Most of the race was along the Oak Leaf Trail, which helped stop the wind quite a bit, since it's all tree lined. However, because it's April and this month tends to be very wet, the Oak Leaf Trail was flooded over in a few sections. This caused a huge bottle neck issue because the 10k racers were coming back from their down-and-back and were hitting the same area as the half marathoners. Some people found a small, dryer path around the water, which added time onto the run, while some racers just ran right through and got their feet soaked.

The aid stations were great! Serving Gatorade and water every few miles. And the course was mainly flat minus a few rolling hills around the 8-9 mile mark.
The finish was great, and I was surprised to see so many people cheering in the ugly weather. Right when you finish they hand you a really wicked looking medal that can also work as a bottle opener! They also hand you a beer ticket for 1 free beer at the end. The race results were posted extremely quickly. Before I even wondered about checking the time, they were posted.

This was a good first year of the race, but there's definitely some room for improvement for the course.

This was only the 2nd year for this race and they had almost a double increase in participation. This trail run is part of the Thrillogy series in Kenosha, Wisconsin. Most years, this trail would be covered in snow by mid-December, but this year it was 55 degrees outside! The course was set up in the mountain biking trails around Petrified Springs Park. These trails are mainly single track and with some very steep points. This trail is not as landscaped as other cross country trails, so they require you to pay close attention to your feet and your head for branches. You also finish the race by crossing a creek, which the water was up to my knees this year! So bring extra socks and shoes to change into.
Though the course caused some confusion when it split between the runners and walkers, this did not deter anyone from having a great time after the race. This race was meant to be about friends and comradery.
After the race is over, the director had 2 bonfires set up, with coolers full of craft beer, and tons of homemade chili for the runners and their families. Everyone stayed warm around the fires, chatting for over an hour after the race was over.
The homemade rewards go out to the top 3 male and female finishers. The race director also gave out personal rewards to people who may have been new to trail running, couples who ran together, and other fun rewards.

I would definitely recommend this race to someone who wants to give trail running a shot, or someone who loves the single track trails.

Link to this review
Login or sign up to leave a comment.
Lisa Dretske recommends this race
(2015)
"Family Fun when Santa's in town!"

I've never done a Santa Hustle but I think I'm hooked! This event is a great way to end the running season with friends and family.
Packet pickup was extremely easy. I chose to pick my packet up the day before the race at Fleet Feet, but you can also pick it up morning of the race. In the Packet you received a Tech long sleeve 1/4 zip, a Santa hat and beard and your bib.
Parking was all free and fairly close to the race site. They also had gear check, but I didn't find it necessary to use, since we parked so close. They had a ton of fun activities for before and after the race. There were great picture opportunities with a Selfie Station and live reindeer!
For the race, they split it into 2 corrals, runners and walkers. There were so many families here, it was great to see large groups enjoying the morning together.
The 5k had regular water aid stations but they also had a Candy station and cookie station! I think I gained weight on this run.
The finish was right in Veterans park, close to the start. All results are posted online, anticipating it to be too cold for people to stick around. When you finished there was also free bacon to sample.

Overall, I would definitely run this race again with my family and friends. I wouldn't look into running this race for a PR-It's just not the vibe of the race. There were a lot of photographers on the coarse, so I can't wait to see how they turn out!

Link to this review
Login or sign up to leave a comment.
Lisa Dretske recommends this race
(2015)
"Inaugural race was worth the wait! "

I was fortunate to be apart of the inaugural Milwaukee Running Festival! This race weekend included a mile run, 5k, half marathon, and marathon. This race has been years in the making and finally came to fruition. Since this was the inaugural event, I expected a few glitches, but to be honest, this race had a lot of perks that made me overlook this.

To start out, the expo was put on very well. The race director made the expo very inviting for families, so it was great seeing kids and parents wandering around at the expo together, celebrating this event in Milwaukee. The expo was a great size for only drawing in 4,000 runners between all of the events. Some of the perks that I enjoyed were: free Noodles and Company meal the day before the race, nuun at all 18 aid stations, easy parking for the expo and the event, great long sleeve tech shirt, free race photos!

The marathon was a great race, covering a large portion of the city of Milwaukee. For weeks going into the race, anyone could join on the free Thursday night runs, showcasing different sections of the race route, or introducing the public to the different sponsors. This helped in preparation for the event. Come race day, I already anticipated a hilly but scenic route. I even got to explore some parks and views of Milwaukee that I had never experienced before! Some great things about the event was that gear check went very smoothly and took a total of 5 seconds to give them my bag and receive it after the race. There were a few things that can be improved for future years. First, not all aid stations followed the same pattern. Some served the nuun first and water second, and others flipped this. There weren't any visual markers to show you which came first either, so after a while I learned to just call out what I was looking for and volunteers would indicate if they had it or if I needed to keep going. Second, most of my friend's gps watches marked the route as being short. Third, though I very much enjoyed running through some of the parks of Milwaukee, the zig-zagging in some areas did not feel great on my knees. Fourth, NO BEER!!! Apparently the liquor licence ended up falling through the cracks at the last minute. They did provide Sprecher's Root beer after the race though.

Some other issues I had were with the VIP package. This was supposed to include exclusive porta-potties, private gear check, food before and after, exclusive parking close to the race, and a free hat. Unfortunately, I was told there were no special porta-potties for the VIP area. And I also could not find the VIP parking. This was a little disappointing.

One nice thing about holding the marathon and half marathon on the summerfest grounds is the accessibility to the highway, free parking, and close proximity to downtown restaurants and bars for after the race.

In the end, I do believe this was a great race with a lot of perks for its first year. I plan on running it again next year.