Jeannine Avelino recommends this race
(2015)
"Running with the masses" 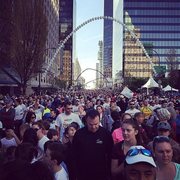 The Vancouver Sun Run was a very cool experience. To be a part of something that big is just mind-blowing, plus how often do runners get to rule the roads? My favourite part was running in the middle of the Burrard Bridge... such a wide and beautiful bridge that you never see without cars (during the day anyway)... amazing. There were live bands along the route as well as spectator vantage points so it was a great vibe the whole way. I have a few criticisms though, which you will read ahead.

In the weeks leading up to the Sun Run, I've trained on the course and it's beautiful, such a great run... not too challenging, not too easy.... a good mix. Unfortunately because of the sheer amount of people participating in the Sun Run, you can hardly see any of the natural beauty because you are more focused on weaving, dodging, and trying not to run into anyone who decided to suddenly stop in front of you to take a photo (true story). Basically, my main complaint about this run is the people who don't know race etiquette. They hug the inside corners and slow down or block runners, and those who lie and seed themselves in the faster corrals just so they can start earlier. (Fyi I was seeded in the white corral - 1:00 to 1:15 finish time - and I didn't start until 45 minutes after the event started.) There were also a lot of water stations but that also meant a lot of plastic cups strewn all across the road and people slowing down for them. I hope the Sun Run had a great cleaning crew.

I knew ahead of time that the Expo was gonna be a gong show (I had been there previously when my ex raced) so I decided to just head home. I did go to the Expo the day before and bought some stuff. New Balance had a big store area where people can buy Sun Run branded tech shirts that were actually quite nice as well as other gear at a discounted price. There were other vendors there like Powerbar who gave out samples of their Gel Blasters (yum). I didn't like that the Sun Run swag was simply a cotton t-shirt - I figured with 40,000 registrations, I'm sure they can easily afford a tech shirt and/or medal to give away... but I guess you also get what you pay for... since registration was only $49.

The Sun Run is a Vancouver tradition that will most likely stay the same every year for years on end. It's something locals need to do at least once, in my opinion... but if you hate crowds, maybe you shouldn't do it... or train hard to be good enough for the earlier corrals with the more serious runners. That's definitely my motivation.

Check out my blog post on the Sun Run here: http://everythingbutweddings.ca/2015/04/vancouver-sun-run-2015/

Link to this review
Login or sign up to leave a comment.
Jeannine Avelino recommends this race
(2015)
"Great atmosphere!"

This was probably one of my favourite races of the year so far. The course was a decent length and full of natural beauty. Their website was very informative, the course was easily accessible by transit, and it started promptly. I thought there was enough support along the course and the course itself wasn't completely flat. There was a bit of an uphill stretch towards the end which really tested your reserve energy :P They hired Marathon Photos to cover the event and I got a lot of neat photos from it. After the race, there was a lot of food available (bagels, bananas, juice, power bars, yogurt, etc.) but it was also a big plus that the Stanley Park Pavilion Restaurant was there so we were able to grab more than just snacks. They also had a small expo in the Pavilion... not too many vendors and not too many that I was interested in. The medal they gave out was beautiful and my favourite so far. I love that you can order iTabs for it that's engraved with your name and finish time. Every race should have that. All in all, a great experience!

Read more about how the race went for me here:

Link to this review
Login or sign up to leave a comment.
Jeannine Avelino recommends this race
(2015)
"Fun and fast"

Get your green shirts and tutus out for this super fun 5k in Stanley Park. The course is not on the seawall so it's up and down... but a gradual up and down. The only steep hill was the hill right before the finish line leading up to the Stanley Park Pavilion... but that's just a short sprint. The elites started first but other than that, there were no set corrals so if you're fast and you get stuck at the back, you'll have to weave your way through. The price is right ($28-38 depending on when you register) or free if you fundraise $100 for the Canadian Diabetes Organization. With the registration, runners get a beer glass from one of their primary sponsors, Granville Island Brewing. Unfortunately they didn't give runners a free fill up of beer. The swag/food tent was pretty cool... I got some free magazines, free coffee and cookie from Starbucks, free mini cupcakes from Cupcakes, granola from Granola Girl, yummy stew from Urban Fare, KIND bars, yogurt... and there were more but I didn't get any cuz my hands were full :P You have to buy tickets to get into the beer garden... I decided not to stay for that.

** Note: I put 3 stars for Aid Stations because I really can't remember if there were any or not (I didn't use any)... but this race was so well organized, if they were there I'm sure they were well stocked :) **

Here's how my race went: http://everythingbutweddings.ca/2015/03/bmo-st-patricks-day-5k/

Link to this review
Login or sign up to leave a comment.
Jeannine Avelino recommends this race
(2015)
"Nice and flat!"

This was a nice small race to start off the year with under 700 people including all distances. The terrain was flat and fast, starting at Olympic Village and heading along the seawall towards Stanley Park. The 10K route heads back once you hit the Inukshuk near English Bay. There were only a couple of water stations along the 10k race route but their volunteers need to know not to block the runners' paths and just stick to the side. We got a free pair of socks and a nice looking medal with the registration. This was my first TRY EVENTS race and I thought they did a great job. Nothing was confusing for me and everything started promptly. A great experience overall and you can't beat the view of False Creek :)