Tina recommends this race
(2017)
"Great community feel for a smaller race and lots of dogs!!!" 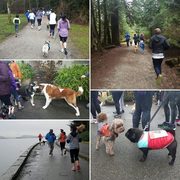 I did this race through my running group as the app Run Go organizes this run and 100% of the proceeds go to the BC and Alberta Guide Dogs. As 100% of the proceeds go to a good cause - this is a minimal expo, minimal aid station and minimal race day sparkles and flashes. However, having said that it was a super unique race because everyone brought their dogs and it was really fun to have a mix of road and also trail through Stanley Park. As it is a small race - it definitely has a big community feel and after there is even a big pancake breakfast.

I would recommend this for anyone that has a dog and runs or wants to do a family activity as there is even a 2km option as well.

No swag unfortunately except for some goodie bags from some pet store sponsors so if you're looking for a medal or shirt....not here.

Link to this review
Login or sign up to leave a comment.
Tina recommends this race
(2017)
"Not so much chilly!" 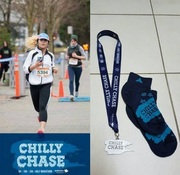 This was the first of the Try Events 7 Challenge Series which is a GREAT deal by the way. You pay under $250 for 7 races in a year and they all come with swag AND a medal.

Chilly Chase is their first run of the year. It was super small and not a huge turn out but it's a nice run to do to kick off the year.

The pros: high energy warm up team, free photos on their facebook page same day, medal, swag (long sleeve tech shirt and socks), timed event, small event so easy to get a 2nd medal for top 3 in your age category

The cons: low key event, no spectators, no designated running route (so may run into actual runners, walkers!), no amped up feeling

Overall, I think if you're running for timed events and to get the package deal of 7 races and to keep yourself accountable definitely worth it! But if you're in it for an amp up big running event or if this is your first race....maybe save it for a bigger one.

Link to this review
Login or sign up to leave a comment.
Tina recommends this race
(2016)
"I buy into the hype!!!!"

I was always wary about the Lululemon hype especially with the race entry being $130 (for 2016, I believe it has gone up since). But with customized shorts that come months early and a app to help you train and a huge social media presence, they get you excited before the half marathon starts!

The expo was amazing and lots of vendors, samples and things to check out. They also had classes and presentations and it was all very well organized!

The race day was also amazing as they had lots of staff to get you hyped out and lots of photo spots and SO many people come from all over to attend this race. The best thing about this race as it is Lululemon they emphasize on having FUN more so than racing.

The race was amazing they had so many entertainment stations and aid stations that were unique! They had spinning studios doing spinning classes on a bridge (see picture) or police officers with a speed radar saying you're going too fast! They even had people on jet packs in the water and a boat party happening as you run along the sea wall!

At the end of the race they had a great meal to offer as well as a complimentary 10-15 minute massage and foam rolling stations. After a few hours of rest you're then invited to a yoga session looking out at Vancouver followed by a concert from a few bands.

It is a pricey race but if you want a race that's organized well, gets you hyped up, and has a huge community as well this is the race to invest in!