If you're looking for a small town race that makes an impact, this is the race for you!

Greenville, CA, is a small town, and when all of the runners and their families show up for race weekend the population of the city virtually doubles! Running With the Bears is an annual race that is a major fundraiser for Mountain Circle Family Services, which is a non-profit organization that works with kids in the foster care system.

I loved this race so much, I'm not really sure where to start when it comes to talking about it! The night before the race, there is a pre-race pasta dinner (proceeds benefiting MCFS) that takes place along with packet pickup. And this year there was a speaker at the event as well. (Full disclosure, I was the speaker!) Being that this is a small race, the expo flowed very smoothly and the line for packet pick up was never longer than 2 or 3 runners deep.

And when it comes to goodie bags... GOOD LORD! I can promise you've never gotten as many samples in a race goodie bag as you'll get from RWTB. It's ridiculous! And the products are all good too! And the finishers medals are legit, not at all similar to what I've gotten from other small races.

The aid stations for this race are also second to none. Each aid station is hosted by a different community group from town and they are all in a competition for best aid station. The runners vote based on favorite theme, best treat, and best overall, and the winner in each category is given a cash prize. The folks that host the aid stations really go all out, and it is legitimately difficult to decide which aid station is best.

All in all, I don't have anything bad to say about this race. The only reason the expo quality received 3 stars is simply that it's small and doesn't have vendors. But for a race this size, that's to be expected.

To read my full race recap and a detailed top 10 list for why I loved this race, check out http://dizruns.com/running-with-the-bears

Link to this review
Login or sign up to leave a comment.
Denny recommends this race
(2015)
"Can You Handle the Heat?"

This past weekend I ran in the ECHO Half Marathon.

It doesn't take a genius to look at the calendar (June) and the race location (Central FL) to realize that this race is going to be a bit on the warm side. So if you don't like a serious sweat fest, this race might not be for you.

Overall, I think the race was great for what it was: a small race for the local(ish) running community. And as far as I'm concerned, I'll take the smaller races over the bigger once any time.

To clarify on a couple of my ratings:

Scenery-Nothing fancy to look at, but I was anticipating mostly streets/neighborhoods and was pleasantly surprised that about 9 miles of the race is on paved trails/back roads. The trails ran through the woods, and looking at trees and bushes beats cars and houses any day.

Expo-I didn't attend the expo, as another runner picked up my packet for me.

Parking-This was the only real negative that I noticed. The parking at the start was a cluster to say the least, though we did get there slightly later than we'd planned. Perhaps getting there earlier would have helped, and I didn't see many better options, but parking was a bit of an issues. (As long as the race stays smallish, however, it shouldn't be a real deterrent to running the race.)

Other than that, things were really good. Great post race food/drink options as well.

To read my full race recap highlighting "The Good, The Bad, and The Heartbreak" of the race, head over to the blog: http://dizruns.com/echo-half-marathon-recap

Link to this review
Login or sign up to leave a comment.
Denny recommends this race
(2014)
"Great Race, Especially for an Inaugural Event"

The inaugural race of the Florida 10 Series-Lakeland was, in my opinion at least, a success.

The race was a 5 mile loop, where those of us that ran the 10 miler did two loops. Course is very flat, which allows it to be fast. There were water stations (with Gatorade) at every mile marker, so there were plenty of opportunities to rehydrate. However, I didn't notice any "real aid stations" that had band aids, vaseline, etc. As for the scenery, it was pretty bland. The race was run on the campus of a new university (Florida Polytechnic) that is kind of in the middle of nowhere. Literally, I don't think there was anything to look at besides other runners, fields, and some trees for the entire 10 miles. As for expo quality, there really wasn't an expo. Packet/number pickup was available the day before the race at one of the local running stores, and also before the race. But honestly, a big expo really wasn't needed.

You can check out my race write up on my blog, at http://www.dizruns.com/florida-10-series/

Link to this review
Login or sign up to leave a comment.
Denny recommends this race
(2014)
"America's Toughest Road Marathon"

I had a blast running this race.

As someone that lives in FL, the mountains and hills that I experienced during this course were beyond what I could have ever prepared for. That said, I would absolutely head back to Roanoke any time the opportunity arises to run this race again.

To address the 2-star review of the parking/access. I stayed at one of the hotels that was a few miles from the race start/expo that was advertised on the accommodations page of the race website. The write up said that there would be shuttle service available Friday afternoon/evening for the expo, and also on Saturday for the race. When I checked in on Friday, I found out there was no shuttle available on Friday, but that there would be on Saturday morning. However, the shuttle wouldn't start running until only about an hour before the start of the race. I assumed that wouldn't be an issue, since the trip would literally only take a few minutes.

When I came down to the lobby, there was no shuttle. And the hotel staff knew of no shuttle that would be available throughout the day. Thankfully, someone from the hotel was willing to give me a ride, and it ended up working out, but I literally was dropping my bag in the bag check as the National Anthem was starting. It added a level of stress that wasn't ideal, but it wasn't enough of an issue to prevent me from wanting to run this race again or to recommend it to others.

Everything else about the race was absolutely top notch. Well organized, great route, tons of local spectators. I definitely plan on running this race again at some point, and can't wait to have a chance to hang out in and explore Roanoke a little bit more next time.

You can read my full recap, and view some in-race video, on my blog. http://www.dizruns.com/blue-ridge-marathon-recap/

Link to this review
Login or sign up to leave a comment.
Denny recommends this race
(2014)
"Inaugural Town of Celebration Marathon" 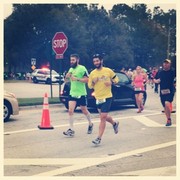 For an inaugural event, I'm not sure this race could have been much better!

I only live about 40 minutes away from Celebration, so I drove over to the expo on the morning before the race to pick up my bib and check out the expo. That morning, things could have been a little bit clearer about where to go, park, etc. for the expo for those that have never been to town before (which included me) since some of the streets were one ways and what not, but the town isn't big enough to get lost in. I found a parking spot "close enough" to the expo, and walked over to it. The expo was small (the race only had 2,000 runners), but I still thought it was good. If you're looking for lots of venders and swag, you'll be disappointed (which is why I gave it 3 stars), but if you like an expo that isn't crowded and gives you the ability to talk with reps from some different brands, then you'd love this expo.

Race morning, I drove back over, and it was much clearer where to find parking for the race. Plenty of free parking was available, however, it did require about a 3/4 mile walk to get to the starting line. There was parking closer to the start, but those lots would have been a nightmare to get out of, so we chose to park a little farther away for an easier exit. In the starting area, the audio was poor, so it was very difficult to hear any of the announcements over the loudspeakers, but things were fairly self-explanatory enough that most people easily figured out where to position themselves for the start. Expected pace signs were clearly visible, and it seemed like most runners lined up appropriately.

The half and full both went off together, which is always a little bit of a pet peeve of mine since it such a crowded start, but with the small field the runners spread out alright. There was one big area of grid lock on the course, where we were running through the woods on a path/bridge that just wasn't as wide as would have been ideal. Thankfully, that stretch wasn't until about miles 10-12, so the crowd wasn't too bad. It was just a bit difficult to pass at that point if anyone stopped to walk in front of you.

At about the 12.5 mile mark, the half splits off from the full, and the full basically runs the same loop again. This is the only part of the race that I really didn't like, just because I'm not a fan of looped courses. When I need something to distract me the most in a race (miles 18-24), I've already seen all of the surroundings in a looped course instead of seeing new sights if it was the first time in that particular stretch of road. Obviously, this loop didn't impact my rating of the race much, but I would prefer not running the same loop twice in a row if possible.

The finish was nice in that you run the perimeter of a small lake, so you can see it about a half mile out. It does kind of make you want to start your kick/final push a little early, but it's nice to know that you're close!

After finishing, there was plenty of live music going on, and finishers got a card to be able to try many food/drink options from the many local business located near the finish. There were two problems with this: many vendors ran out of food for the runners before I finished (and I wasn't in the back of the pack), and many of the options were bread based (pizza, hot pretzels, etc) and I don't eat wheat. If someone was seriously allergic to wheat (which I'm not) there would have been literally nothing for them to eat (for free) post race.

All in all, it was a great race, and I would absolutely run the race again if the opportunity presented itself. I also recapped the race on my blog, so feel free to check out this post for a few more specifics! http://www.dizruns.com/gotta-love-a-solid-pr/