As a recent transplant to the Denver/Boulder area I was looking for a first marathon to break in my legs at altitude and the Colfax Marathon hit the sweet spot for a mid/late spring marathon!

Overview - This marathon is a great tour of the city. You run on some of the downtown paths, run in some of the neighborhoods, and past most of the fun areas downtown. There is a great amount of people out cheering too. This was the tenth anniversary of the race and it doesn't look like it's going anywhere!

Expo - The expo was at the Wings over the Rockies museum and I thought this was awesome! It meant that the expo felt a little crowded but I really enjoyed getting a free sneak peek at the museum. The expo had all the vendors I would expect and things were easy to find.

Race Day - Directions for drop off and parking were lacking in my opinion. I scoured the website and the race materials the night before and I really had no clue where they wanted us to park. Granted the race start is near the Denver Zoo and Natural Science museum so this was the parking area, but it wasn't explicitly called out like I would've wanted it to be.

The race start area was really nice, lots of port-o-potties and lots of room to stretch and roam while you waited for the start. The sun start to rise just around the time the first corrals were off!

The course is a great tour of Denver. You start in the park and then head into the downtown area where you hop onto a multi-use path. You then pass Elitch Gardens and head into Mile High stadium (first relay hand off area) which was really cool!

You then headed back onto Colfax, running past many unique shops until you get to Sloan which is a beautiful lake/park area. This was so pretty and relaxing. In the promotional material they made it sound like the Dragon Boat club would be out on the lake, but they were not. They just had a table set up at the back of the lake loop.

You then exit the park and run through some neighborhoods and then start the trek back down Colfax to Downtown. The sun was getting warm by this point and there was no shade so make sure your sunscreen is handy!

You then head through downtown where there were a lot of people cheering and back to the park where you started. In the promo material they also made it sound like you would be running through the Denver Zoo, but we just ran around it.

Finish Area - The finish area was great, lots of vendors and freebies! There was a pull pork sandwich and a Michelob Ultra included with the race fee too!

Cons
-Invisible First Aid stations - I was trying to find tylenol to keep some hip pain at bay but either the first aid stations weren't set up or they were REALLY poorly marked.
-Having Michelob Ultra at the end of a marathon!!! Give me some full carb glory! JK - but only a little ;)

I moved to Boulder back in January of 2015 and running Bolder Boulder is exactly what I expected Boulder to be every day!

The start area is close to where I live so I was able to walk to the start line and seeing runners jogging over just gave me chills. You can totally tell this race is a BIG part of the community!

Expo- Had some trouble with my registration but got it all sorted out. The expo is held at the Pearl Street Mall so you can kind of meander through all the vendors. EVERYONE came out for this event. With 50k runners registered, the big names were all out!

Race - With 50k runners, I expected some confusion but it was so easy. I I wrote above, I walked to the start line and didn't check a bag so I just had to get in my corral. I was in BB which was pretty early and I had zero issues.

The race begun and it was so fun to be a part of something this huge. The corrals were all well managed and so you rarely found a bottle neck because everyone really was basically running the same pace as you. It was great.

Most of the time you were on 2-4 lane roads so there was plenty of room to run for the most part. There were people cheering everywhere, miles and km were all marked clearly and this was just a super fun time.

At the end you make your way into the Colorado University Boulder stadium and there is a nice little hill there, but running through the stadium is totally worth it!

Finish Area - This was a little congested because there were so many people but they kept everyone moving and there was so much swag! There were lots of post race vendors too handing out freebies to racers.

Spectating - I then double backed to a friend's house along the course and watched the rest of the runners/walkers finish. The nice thing about this race is they have the elitemrunners race at the end after everyone else was done. It was amazing to see them blaze by and I loved being a part of the day!

Link to this review
Login or sign up to leave a comment.
Katherine recommends this race
(2015)
"A Nice Walk/Run in the Park!"

For anyone who loves Disney and is running/fitness curious this is a must do! I have run/walked this race 4 times and it's a great introduction to racing because it's so friendly. It feels like a walk in Epcot more than a race. Nothing beats seeing dawn break while walking around World Showcase!

Link to this review
Login or sign up to leave a comment.
Katherine recommends this race
(2014)
"O-H!" 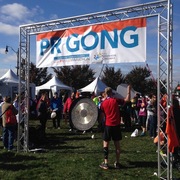 The expo is great, one of my favorite parts was that they had GoodWill there to sell throw away clothes. They also have a big emphasis on the fact that this benefits Nationwide Children's, each mile is dedicated to a child who has been treated or is being treated at the Children's hospital.

The race is great, mostly flat (it's Ohio) and a great tour of the city. There are people cheering throughout. The start is downtown and along the river, which is beautiful as dawn breaks. Towards the end, you run through Victorian Village which has some brick roads so prepare for that.There are some tighter areas but for the most part you are using 2-4 lanes roads for running.

The finish area is pretty crowded but be sure to go hit the PR gong if you ran to a new personal record! Getting out of the parking lots at the end can be tricky. I was able to park in one of the lots and get out pretty easy but my father had parked in a garage and was stuck there for an hour+. Make sure to look at the pedestrian areas when you are looking for parking and try to stay out of the middle of the Arena District.