Katherine recommends this race
(2016)
"A Walk In the Park"

This was my 4th time "running" the WDW 5k and as always it's a great race. There is such a fun and festive atmosphere and it really accomodates runners and walkers of all levels. Since 2/3's of the race is in Epcot it feels more like you are just walking or running through the park with is fun and magical in it's own way! There are times when the course can get crowded but since it's an untimed race, it doesn't really bother me. This is a great race to get pictures with characters and see Epcot at sunrise which is awesome! Very friendly and well supported race and PERFECT for anyone wanting to try a 5k or a runDisney race!

Link to this review
Login or sign up to leave a comment.
Katherine recommends this race
(2015)
"A Columbus Classic"

This is my fourth or fifth time running this race and it's always a "don't miss" for me if I'm at home in Columbus for Thanksgiving. It's a fairly flat course that takes you around OSU campus and the Horseshoe and is well staffed. Lots of families come out and run it together! It's a very friendly and festive atmosphere. The bib pickup is at various running stores in the area and the race day bib pick up is always pretty quick. If you are looking for a turkey trot, this is a great one to run!

Link to this review
Login or sign up to leave a comment.
Katherine recommends this race
(2015)
"One SWEET race!" 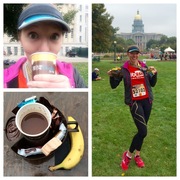 The Hot Chocolate 5k and 15k are run all over the country and because of that the organization, volunteers, and support are top notch! This race also has AMAZING SWAG! Race bib, embroidered zipper sweatshirt, nice drawstring bag, sweets along the course, and an awesome finisher's food (mug with dipping chocolates, an assortment of dippable snacks, a banana, and hot chocolate).

The expo is great with many amazing expo vendors like Nuun, Runner's Roost, 2XU, and others. Lots of official merchandise too!

This race is pretty flat and a nice tour of the city. Part downtown, part warehouse, and part residential as the course winds through Denver, CO. This is a great course for setting PRs and also for first time runner looking for a friendly environment. There are also "sweet stops" along the way handing out marshmallows and tootsie rolls.

All around this is a great race and I highly recommend it to anyone looking for their next race!

Link to this review
Login or sign up to leave a comment.
(2015)
"The Long Journey to Denver"

So first off I will note, the rumor is (rumor because I can't find an official source confirming) that this is the last year for the Rock 'n' Roll Denver Full Marathon. This was the 6th year for the full marathon and apparently the City of Denver and Rock 'n' Roll can't figure out how to make this distance work for both parties. Sad.

Now on to the review!

Expo: I went to the expo for the last half hour it was open on Friday and flew through it! Waiver: Check! Bib: Check! Shirt: Check! Additional goodies: Check! This is the second Rock 'n' Roll event I've participated in and I LOVE that they basically have a "Grab Bag" style goodie bag. Once you grab your shirt, they have a couple bins set up with other samples and coupons from the sponsors. This year they had some "Dirty Chai" from Celestial Seasonings so I might have grabbed a couple (or five) and some gummies vitamins. Pretty awesome way to make sure they aren't needlessly bagging this stuff if you don't care about it. After you are funneled through you are then sent into the main merchandise area and Rock 'n' Roll is a well oiled machine when it comes to merch since they partner with Brooks. From there you are then in the large expo area with lots of different vendors and EVERYONE was there. From Garmin to SkirtSports, if you needed something, ANYTHING, for this race, they had it there. All in all I was in and out in about 25 minutes.

Race: So there was some weird logistics with the race that had a trickle down affect. While the Half Marathon was at 7:15, the Marathon didn't start until 8am which I thought was weird. Since my boyfriend was dropping me off, I didn't have to worry about parking at the Civic Center and then getting bussed the ~26.2 miles to the start area. I didn't hear any runners griping about the busses though.

The start area was pretty serene and we got a beautiful sunrise over the lake. There were a good number of porto-potties but definitely waited in a very long line.

With the playing of the National Anthem we were off! There were 10 (I think) corrals and each was released every 30 secs. So it was a fairly rapid release!

The course was... pretty dull. It's intimidating seeing the skyscrapers so far away and knowing you are running to them. Most of the time we were running through fields, pastures, and industrial areas on a multi-use path. There were pockets of cheerers but there really wasn't a ton of distration on the course which made a personally difficult race more difficult. The course also had a slight uphill for most of the race, one that is only perceptible if you are running for 26.2 miles but not so much so that you want to slow down for it. We also crossed the Platte River on these metal bridges that had a significant bounce to them because of the runners which was unnerving. Around mile 24 we were finally in the downtown area so there were things to look at and people cheering which made the last few miles nice but didn't make up for the rest of the course.

Post-Race: Again Rock 'n' Roll is great at race organization. Like the expo, there was a lot to grab in the finisher's chute which led out to the beer garden (Michelob Ultra anyone?) and finisher's area. However, being a ~4hr marathoner, most of the party had already ended. I missed the main act and most of the runners from the other events had already cleared out. I don't really run this race for the concert but if they had started the marathon earlier, it would have made the finish area feel more rockin'.

Overall: It was an okay race. The course was pretty flat and the aid stations had great volunteers. If you are looking for a truly Denver marathon, this isn't it. If you are looking for a marathon in Denver or Coloraro, there are so many more interesting (sometimes challenging) courses. I had a great time at my first Rock 'n' Roll event in SF but this one was just okay. If I ran this event (and they were still offering the marathon) I'd choose the half instead.

Link to this review
Login or sign up to leave a comment.
Katherine recommends this race
(2015)
"This wasn't just a race, it was a well organized and aided adventure!"

This was an amazing adventure. The altitude, the fall colors, the beauty that is Park City, UT all go into making this an amazing experience. This was my first 50k and I feel so fortunate to have picked such a challenging and rewarding course!

This race is difficult. It starts at 7,000 ft and climbs to nearly 10,000 ft with a total elevation gain of 5,100 ft over the 31.1 miles. It's a doozy but the views are totally worth it. The aid stations and volunteers were amazing and the race was very well organized. My favorite was at Aid Station 4/5 the volunteers had themed it to Oktoberfest which was a welcome party so late in the race. The final 5 miles are amazing becuase they are all down hill and you really just get to "cruise down" to victory!

This is a very difficult course in terms of elevation but other than the parts of the race above 9,500 ft, the paths are packed dirt and there was a decent amount of tree coverage. The trail is VERY WELL marked, I never felt lost or like I wasn't sure where I should go. We had perfect weather for this run but that also means the sun was very warm that high up so you need to be careful. Altitude is difficult but if you are aware of your breathing you can keep it in check by walking when your breathing gets to hard.

The expo wasn't much since I just picked up my shirt and bib at The North Face store in Salt Lake City but the after race area was fun. Beer, food, and vendors were out and just sitting in the sunshine was great. This is very small race (in terms of total runners) so there was plenty of room and no lines at the porto-potties!

Overall, I highly recommend this race if you are up for the challenge. Train for hills and try to hit the trails before race day but the location and race staff were excellent. I'm definitely adding this to my list of repeats if I'm lucky enough to get the chance!