Read about the full race experience on my blog:
https://bradleyontherun.com/2018/02/04/chilly-chase-chasing-the-chicken/

Packet Pickup: Pickup was held on both Friday (in Kitsilano) and Saturday (in Burnaby). Thanks again to Debra for pickup up my bib!

T-Shirt/Swag: The Chilly Chase doesn’t include a t-shirt, but there were Chilly Chase socks to be had! Unfortunately, the sock shipment was delayed due to snow storms in the US causing delays. We were giving the option to pick up our socks at a future date or (my choice) to donate them to the Lookout Society, this event’s charitable partner.

Course: All four distances including out-and-back routes along the False Creek Seawall, with extensions to English Bay (10k) and around Lost Lagoon (15k, half marathon).

Post-Race: It’s always nice when a winter run has some inside space – and the Creekside Community Centre is a great place to be. Post-race included bananas, treats from Nature’s Path, and lots of good people!

Would I Run It Again? January is always a challenging time for a race, but I like the motivation of a run early in the year. Having run the half and the 10k, maybe I’ll try one of the other distances in 2019!

Login or sign up to leave a comment.
Bradley recommends this race
(2017)
"Fun Run, with a few areas for improvement"

Social Media: The Strachan Hartley Foundation has reasonably active Twitter and Facebook accounts, but their Instagram hasn’t been updated since last year. I also mentioned it in my review of the 2016 5k, but their website needs some improvements – better SEO (Google still lists the 2015 race), and more recent content. I challenge a website designer to take on this challenge and help the Foundation out!

Package Pickup: The entire West Van Run Crew did morning-of pickup, which was quick and uneventful.

T-Shirt/Swag: Because I registered early, I got the 2017 SHLF Run shirt – and it’s fantastic! Designed by a local 10-year-old, it’s probably one of my favourite race shirts to date!

Course: I thought the 5k was challenging, but the 10k is definitely not for the faint of heart. Are you a hill lover? Then this is the race for you! Especially due to the route changes, there should have been more effective course marshals at strategic points on course. Particularly at the 5k/10k split, better signage and a much more enthusiastic course marshal (maybe the football quarterback??) should have been deployed there. *I should add, however, that the race website has a disclaimer…that runners are responsible for knowing the course!*

Post-Race: Last year, the rain forced us back inside. We had great weather this year, so refreshments and festivities were all at the finish line. Added such a great vibe to the event!

Organization: Overall, the event is quite well organized with a great community vibe. Course marking and marshaling could use improvement, but I understand the limitations of a 100% volunteer race. Still – lots of fun!

Link to this review
Login or sign up to leave a comment.
Bradley recommends this race
(2017)
"47th Annual James Cunningham Seawall Race" 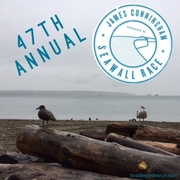 For the full race report, with photos, visit my blog:
http://bradleyontherun.com/2017/10/22/47th-annual-james-cunningham-seawall-race/

Social Media: The Seawall Race / Vancouver Running Festival engages actively on social media – particularly on Twitter and Facebook. Follow them! I would definitely encourage the organizers to get on board with Instagram for the 2018 season.

Packet Pickup: Two afternoons/evening at Denman Running Room, and also on race morning. The process was quick and painless.

T-Shirt/Swag: I like the simplicity of the t-shirt design, and the steel grey colour. It’s classic, and a shirt I’ll enjoy wearing. Due to the last-minute decision to pull the previous medal design and replace it with one created by an Indigenous artist, we did not receive our bling at the finish line. I’m very excited to see what it will ultimately look like!

Course: Counter-clockwise on the Seawall, starting and finishing at Second Beach. A very short out-and-back in Coal Harbour. Lots of beautiful (if cloudy and rainy) views all the way around Stanley Park. Fast and flat.

Post-Race: Water, coffee, bananas, an energy drink, and protein bars. All under tents as much as possible, making the best of rainy conditions. A costume contest! And oodles of giveaways and door prizes for those willing to brave the elements until the end.

Would I Run It Again? I have a renewed enthusiasm for the Seawall Race, and can’t wait to see what the organizers have in store for 2018!

Link to this review
Login or sign up to leave a comment.
Bradley recommends this race
(2017)
"Mission Half Marathon - Mission Accomplished!"

A totally unique experience - involving 10 laps of the Mission Raceway! Read all the details, including my turn-by-turn impressions, on my blog:
http://bradleyontherun.com/2017/11/01/mission-half-marathon/

Social Media: For a brand new race, I would like to have seen a bit more promotion and activity on social. The website had plenty of information and the Run BC Events Facebook page posted about once a week. The Twitter feed? Needs some work to build a stronger brand.

Packet Pickup: Only option was morning of, which was just fine given the size of the race.

T-Shirt/Swag: This was a very bare bones race, so no swag EXCEPT for a really nifty medal!

Course: Ten (10) laps of the Mission Raceway, which is just about 2.2 kilometres – followed by a final straightaway on the drag strip to the finish line. Pancake flat. One sharp switchback turn. Would this be a good course to PB on? I’m not sure…I certainly didn’t. But it has some potential! Plus, there’s an aid station every 2.2 kilometres!!

Post-Race: Water and Gatorade. Just the basics. Plus some very accomplished runners!

Recommendations: This race has the potential to be a really solid and fun local event. More runners, a couple of sponsors, some additional spectators and volunteers, and maybe a food truck. A mini-festival! What about a 10k option? That might attract some runners who aren’t prepared to do a half marathon. OH – and a checked flag to wave at the beginning (and end??) of the race!!

Would I Run It Again? The course is seared into my brain, so I’m not absolutely sure I would do it again. However, it was actually a surprisingly enjoyable experience, and I’m really glad I had the chance to run it. Maybe, just maybe, I’d give it another go…

Link to this review
Login or sign up to leave a comment.
Bradley recommends this race
(2017)
"Rock 'n' Roll Montreal - Having a Heat Wave!"

For the full report, with photos, visit my blog:
http://bradleyontherun.com/2017/09/28/rock-n-roll-montreal-heat-wave/

Social Media: Somehow I ended up on the French-language mailing list (which is fine, gave me a chance to practice), and we received regular updates as race day approached, including information on the marathon cancellation. Twitter and Instagram are for the entire Rock ‘n’ Roll series, but Rock ‘n’ Roll Montreal had their own Facebook page, which was informative.

Packet Pickup: Given all of the changes that resulted from the marathon cancellation, I thought things went fairly smoothly. Long lineups and long waits, but nothing too unreasonable. I heard that Saturday was actual less busy than Friday, so I guess it’s all about timing. Everyone was very friendly and helpful.

T-Shirt/Swag: The t-shirt is not my favourite – a little on the dull side – but the light blue colour is quite nice. I LOVE the finisher’s medal. I had the chance to get a full marathon medal (because I had accidentally signed up for the full), but took the half because I liked the colours (and, in reality, only wanted to run the half!).

Course: So many bridges, parkland, islands and touristy areas, old city streets and urban areas – this race has it all! Great views of the skyline, too, from the islands. Although the uphill for the final three kilometres is tough, it’s not excessively steep – overall, an enjoyable course.

Post-Race: Although I didn’t stay to experience the whole ‘party’ atmosphere, I felt that there was something for everyone at the finish line. Parc La Fontaine is big, so heaps of space for relaxing away from the crowds if you want.

Organization: Other than the lack of signage at the start line, I thought this was a well-organized event. Given the challenging circumstances of the weather, a race cancellation and an earlier start time, they managed remarkably efficiently. Good job!

Would I run it again? Montreal is a five-hour flight from Vancouver, so there are logistics and vacation time involved. However, all things being equal, I would absolutely run this race! And, as the only Rock ‘n’ Roll race in Canada – and in one of the country’s most amazing cities – it’s definitely worth it!