On September 10, I had the opportunity to run the inaugural Atlanta Craft Classic Half Marathon. I was super pumped to meet up with Jessica and Chadd (two awesome BibRave Pros) and run this new race in Atlanta.

The Thursday before, I headed over to Road Runner Sports in Buckhead to pick up my race number, shirt and other goodies. I was pleasantly surprised at the extra stuff you get for the race. All runners received a commemorative tee (or tank), finisher’s medal, race pint glass, sunglasses, free race photos and post-run beer! Now I’m not much of a beer drinker, but I’ll take free sunglasses and race photos anytime! The race number/shirt pickup was very easy with plenty of free parking, which is always nice in Atlanta.

The race start/finish was down in Grant Park, which is just a few miles south of downtown Atlanta. The race start was at 7:30am, but the race instructions mentioned parking might be a little tight in the park. I had asked one of the guys at Road Runner Sports and he said to expect about 1500 total people between the half marathon and 5K. So I decided to get down there between 6:15-6:30 to be sure I had plenty of time to park. Parking was no issue since I got there as early as I did. I ended up sitting in my car for a good 30 minutes before making my way over to the race start to meet up with Jessica and Chadd.

After meeting up with Chad and Jessica and grabbing a group pic, we made our way to the starting line. We ended up splitting away from each other as we all had different race paces and goals for the race.

The race got started a few minutes late, but what can you do. Once we got going, I knew it was going to be a tough race. Between the temperature rising and the hills that continued to come throughout the race I knew this wasn't going to be a PR for me. Fortunately, the course took you through some pretty cool parts of Atlanta, from Turner Field and Inman Park to Virginia Highlands and Ponce City Market. This helped a little bit, as there was a lot to see as we were trekking along. We ended up on the Atlanta Beltline for about 2 miles towards the end, which I wasn’t a huge fan of. The Beltline was open to the community (as it should be), so there were quite a few other runners, bikers and walkers out. This made it quite a bit more congested than it should have been towards the end of the race.

As I made my way out of the Beltline and back toward Grant Park, my energy level was very low. I was taking fuel and hydrating correctly, but the humidity and hills had taken their toll. I crossed the finish line almost completely drained. I grabbed my medal, water, banana and got a few pictures before making my way back to the car and back home. I ended up not using my ticket for the free beer as I'm not much of a beer drinker and the lines were just way too long by that point.

All in all (taking out the second half of my actual race), I was pleased with the overall race itself. The course, while very hilly, had a lot to see. There were plenty of police to help guide the runners and stop traffic. The crowd support wasn’t very strong until we got back to Grant Park and the finish line, but honestly the race itself wasn’t very large and it’s the first year, so I wasn’t surprised.

I would definitely recommend this race to someone who wants to run a half marathon in Atlanta, with the understanding that it’s a pretty hilly race and in early September so it’s going to be hot.

Link to this review
Login or sign up to leave a comment.
Allen recommends this race
(2016)
"Star Wars Half Marathon - The Dark Side"

April 14-17, 2016 marked the inaugural Star Wars Half Marathon Weekend - The Dark Side. Being a huge runDisney and Star Wars fan, I knew I had to run at least the half marathon.

Now I have run a lot of the Disney races for the past 5 years, so I'm no stranger to running at Disney. They typically do an outstanding job with all aspects of the race. And this one was no exception.

The expo offered plenty of great booths/merch. Picking up the race number and race shirt went smoothly as well. They do require a signed race waiver (don't worry you can print one at the expo if you forget your waiver) and a photo idea. Unfortunately, you can't have someone else pick up your race number for you.

You can either drive to the race start that morning or if you are staying on Disney property, you can take Disney transportation. You definitely have to account for the large number of people and running when coming in that morning.

The half started at 5am and the walk from the Epcot parking lot to the starting corrals is about a 15-20 minute walk. Needless to say, it is an early morning for sure.

The race itself was great! I loved running through Epcot, Boardwalk and Beach Club Resort, Hollywood Studios, Animal Kingdom and finishing in the ESPN World Wide of Sports! There are definitely a lot of times you are running between the parks where there isn't very much to look at...however Disney does a great job with putting multiple characters and cheering sections along the way. And they had some excellent Star Wars characters out for pictures. I was very pleased!

The medal was easily one of my favorite finisher medals from any race I've done. And the shirt was too! All in all, I highly recommend this race if you are a Disney/Star Wars fan. I plan on returning next year for the Dark Side Challenge (10K on Saturday and Half on Sunday).

Link to this review
Login or sign up to leave a comment.
Allen recommends this race
(2016)
"2016 Publix Georgia Half Marathon" 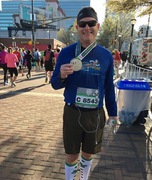 I highly recommend this race in Atlanta. It takes you from Centennial Olympic Park through some of my favorite parks in Atlanta. From MLK, Five Points, Virginia Highlands, to Piedmont Park and Midtown, this is a beautiful, scenic course. It is pretty hilly but Atlanta is a hilly city. From mile 9 to around mile 11, there is a pretty steady incline. But all in all, there is great crowd support, plenty of water/powerade stations as well as aid stations along the way.

Great shirt and medal. In fact...probably one of my favorite race medals. The race start/finish has plenty of parking around the downtown Atlanta area. It is also very easily accessible by MARTA which is what I used that morning. I will definitely be doing this race next year!

Link to this review
Login or sign up to leave a comment.
Allen recommends this race
(2016)
"Suwanee (GA) Gateway Half Marathon "

Saturday, January 30th, I had the opportunity to run the Suwanee Gateway Half Marathon in Suwanee, Georgia. Suwanee is about 25 miles north of Atlanta.

I got up bright and early to make my way up to the Suwanee Town Center. The race started at 7:30, but I was aiming to get up there a little before 7:00 to park and find the starting line. One of the nice things about this race is the runners could hang out in the City Hall building before the race starts. It was a chilly 30 degrees that morning, so not having to wait outside in the starting corral was awesome! The race was a nice size of around 300 runners, which made for an easy transition to the starting line, which was literally right down the steps from City Hall.

At 7:25 we made our way down to the starting line and by 7:30 we were off. My goal was to maintain around a 10 minute per mile pace. I had read there were several hills in this race, so I was mentally preparing myself to dominate the hills!

The first 3-4 miles were nice and steady. As we entered into George Pierce Park, we encountered our first big hill. And I’ll be honest, it about wore me out. I train on some hills in Atlanta, but my long training runs during Dopey were mostly flat to simulate running at Disney. It had been quite a while since I had run a hill like this one for sure.

After George Pierce Park, we headed into the Suwanee Greenway, which was my favorite part of the run. The greenway feels like you are running on a trail through the woods with beautiful scenery, trees and water along the way. As we exited out of the greenway, the hardest part of the run was next. Mile 8 to around mile 10 is a steady incline. It definitely took a lot of my energy to continue to push through.

But the nice part is once you get past this section, it’s a steady decline from around mile 10 to around mile 12.5. My fastest 3 miles were during this stretch and I was able to regain some of the lost time from the previous hills.

As you make your way back to the Town Center and the finish line, you encounter the final hill, which unfortunately is at the very end. But as I crossed mile 13, I was able to push the last tenth of a mile and cross the finish line with a solid pace and great finishing time. I grabbed my medal, water and banana and made my way to my car, which was right at the mile 13 marker.

All in all, it was a great race! For the size of this kind of race, there were plenty of water stations and good crowd support along the way. I will say there were quite a few more hills that I was expecting, but nothing impossible. I definitely think I will do this race again.

Link to this review
Login or sign up to leave a comment.
Allen recommends this race
(2016)
"WDW Marathon Weekend: 10K" 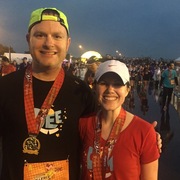 I was up by 3:30 am that morning.I checked the weather and mentioned it looked like it might rainthe whole time. Fortunately, I had trained a few different days in the rain during the Fall to prepare myself for any kind of weather. I headed over to the Epcot parking lot with no trouble and sat in the car for a good 10-15 minutes since it was already raining. After getting through the bag check area, I grabbed a quick picture, found the port-a-potties and got into the corral. The rain, while never super strong, was coming down enough to be annoying. I was already pretty wet.

I took a nice slower pace for the 6.2 miles. With the rain, there were quite a few puddles. My feet/legs were soaked by the end of the 3rd mile. I got to the Boardwalk Resort area between mile 4 and 5. And I must say, it was my favorite part of the course. Seeing all of the buildings lit up with a ton of people cheering you on, really gives you an extra push.

I finished the 10K by running through Epcot. My time was 1:05:14 for right around a 10:30 per mile pace. I was pleased with my pace and time since I was definitely trying not to push it too much. I picked up my medals, got a few pictures, water/Powerade, and runner’s box and was on my way.

This was my first 10K at WDW and I very much enjoyed it (besides the constant rain). I would highly recommend!